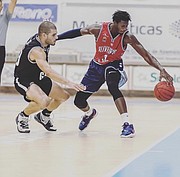 Both Bahamian pro basketball players in Portugal’s Liga Portuguesa de Basquetebol (LPB) got off to winning starts in their 2020 regular season debuts.

Travis Munnings and Jonathan Augustin-Fairell were both among the leading scorers for their respective clubs in the top tier league in the country.

Munnings finished with 11 points, six rebounds and three assists to help UD Oliveirense to a 73-53 win over Ovarense on the road.

Munnings and the frontcourt helped outrebound their opponents 47-24, including a 21-7 advantage on the offensive boards.

Oliveirense is the two time defending champion and Munnings joined their quest for a third consecutive title after last season was canceled due to the COVID-19 pandemic.

They return to the court October 17 when they host Galitos-Barreiro.

Augustin-Fairell scored a team high 15 points and grabbed six rebounds to lead FC Porto to a 62-55 win over Academica. He shot 7-10 from the field and also added two steals.

They also return to the court October 17 when they face Vitoria SC.

“My expectations are very simple, make everyone remember me as one of the hardest players. I know and understand that Oliveirense Basquetebol has a great coaching staff as well hungry players that are skilled on many levels,” Munnigs said, “I also know that the support from the community is a huge factor in the team’s success and you have to appreciate such gems like that.”

Augustin-Fairell is in his fifth season of professional basketball and has now played in five countries - Austria, France, Belgium and most recently, Argentina. He began last season with Basic-Fit Brussels in Belgium’s Euromillions League, where in 14 games he averaged 20.7 minutes, 10.5 points and 6.5 rebounds per game. He then concluded the season with Obras in Argentina’s La Liga where he played just five games before the season was abruptly ended due to COVID-19. He averaged 10.4 points and 5.6 rebounds per game.