Impressive Showing For Albury And Believe Prep In Florida 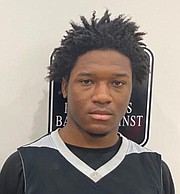 DESPITE losing their first game of the pre-season, Deyton Albury and the Believe Prep Academy basketball team had an impressive showing at the Big House Complex in Tavares, Florida, over the weekend.

In the four games they played, Believe Prep Academy completed the jamboree with a 3-1 win-loss record. Albury, however, only played in three of their games as they had two teams entered in the jamboree.

Meanwhile, Garreth Edgecombe and Franklin Prep Academy were not as successful, losing all three of the games they played in the jamboree - 59-47 to Feltrim Academy, 60-46 to Downey Christian and 75-60 to Miami Prep Elite.

The jamboree, hosted by Elite Basketball Services Juco Showcase & Hoop Exchange, featured some of the top prep college teams in the United States.

Believe Prep started the jamboree with a 51-43 win over NTSI PG. They also won 55-40 over DME Sparks Academy and 59-42 over IMG Performers PG Elite. However, their only loss came at the hands of DCP, over powered Believe Prep in every category with a 74-36 rout.

“Once again, we as a team, played good, hard and tough,” said Albury, as he credited coach Kevin Jackson for keeping them motivated each game. “It’s only the beginning and we are making statements now so later on, it’s going to be scary.”

In two of the games he played in, Albury wracked up 20 points and he had 19 in another.

“I played more trying to get an impact on every area by letting my scoring and rebounding doing the talking,” Albury said.

“But my defence could’ve been better. I just need to improve a little in that area.”

Both Albury and Edgecombe, former team-mates at Temple Christian Academy where they made an impact on the Suns’ senior boys’ basketball team, are making their college debut after graduating from high school.

Albury, 18, left Temple Christian two years ago for the United States where he went on to star for Sunrise Christian Academy in Bel Aire, Kansas in basketball and football.

Edgecombe, also 18, left Temple Christian and moved to Galilee Academy where he graduated this year as well.

Albury and Edgecombe played together this summer as they were reunited with their Suns’ coach Jamal Smith to play in a few AAU Tournaments during the coronavirus pandemic strucken summer to prepare them both for prep college.

They are both using prep college to prepare themselves for their journey through college as they seek to secure athletic scholarships.