Insight: We’Ll All Be Winners If We Each Do What We Can In The Fight Against Covid 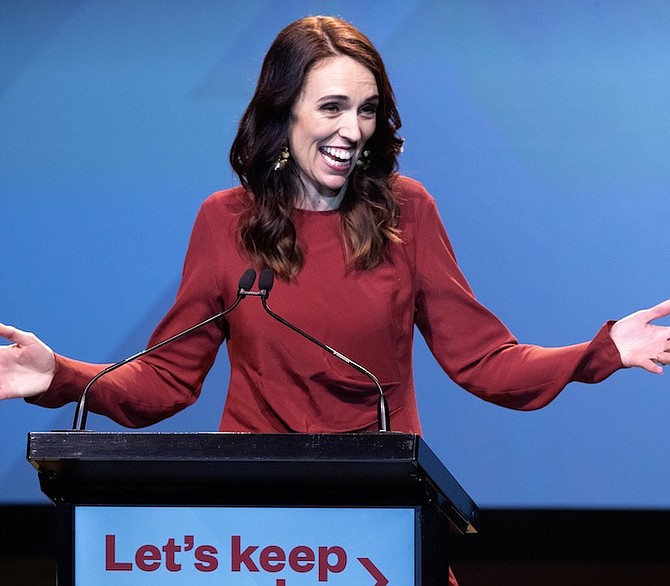 JACINDA Ardern’s success in dealing with COVID-19 has seen her party earn a landslide win in the New Zealand elections - will the same be able to be said by Prime Minister Dr Hubert Minnis?

This weekend brought us a sight of what could have been us in the continuing fight against the COVID-19 pandemic.

We did not need to go through the looking glass to find this example of how our fate could have been very different – we only needed to look to New Zealand.

On Saturday, the electorate of that nation cast their votes for who they wanted to lead the country. In the depths of a pandemic, any such vote is going to be steered by how well the electorate feels the leadership has handled the outbreak. Indeed, when Bahamians next go to the polls in our own election, the handling of the pandemic by Prime Minister Dr Hubert Minnis will weigh heavily on the minds of voters.

As it is, New Zealand voters chose to return their leader – Jacinda Ardern – to office, and not just by a fine margin, but by a landslide. The opposition National Party won around half the votes of Ardern’s Labour Party.

The social media dissenters were soon out in force. New Zealand is different, they said, it’s a small country, with a small population and surrounded by water so it’s easier to control entry to the country by air and water.

Does that sound familiar, Bahamas?

We too are a small country – with a population of around 400,000 compared with New Zealand’s 4.8 million. We too are surrounded by water.

Around the world, New Zealand has been held up as a good example of how to deal with COVID-19. Truly, there is an element of unfairness in comparing it with land-locked nations with people travelling across borders that are impossible to lock down completely, but there is more to it than that. Indeed, if one looks at the number of deaths per million people, 48 nations have lower figures than New Zealand – including China and Vietnam, but also including island nations such as the Seychelles, St Lucia or St Vincent and the Grenadines.

It all begs the question – if they can do it, why can’t we?

According to the statistics espoused by our government, the majority of cases we have had to deal with have not been the result of tourists coming in. That barely notched the figures at all, if we are to believe what we have been told.

No, rather the responsibility lies squarely on our own shoulders.

Some of that falls on the government’s shoulders, absolutely. Earlier this month, infectious disease expert Dr Nikkiah Forbes acknowledged that testing capacity earlier this year “was not what it is today” and that in March, when The Bahamas had just four confirmed cases of the virus, it could have been more than 100 cases at that time.

The suggestion that a junkanoo rushout held after a funeral earlier this month may have become a superspreader event for the virus is deeply saddening – but what did we think was going to happen from such an activity?

When we see videos being circulated of parties and get-togethers from people clearly not observing the simple steps we need to take to prevent the spread of the virus, is it any wonder that we cannot seem to stop it from taking hold?

We’ve all heard the anecdotes on social media of people who are supposed to be in quarantine but who are found to be going out and about – or even trying to go to work only to be turned around and sent home by their bosses. Those are the ones we hear about – we worry about those we don’t and who sit there quietly spreading the virus to colleagues and customers alike.

How many times have we seen someone wearing a mask below their chin instead of covering their nose and mouth, leaving it completely useless. You might as well not be wearing a mask at all rather than wearing it there. And if we are our brother’s keeper, how many of us have spoken up to encourage that person to pull the mask up properly?

According to officials, a significant portion of the cases that sprang up here in The Bahamas came about because of Bahamians flying to visit Florida and other hotspots when we opened the borders the first time, and bringing the virus back home.

In short, we did this to ourselves.

There are lessons we can still learn from the likes of New Zealand. It went strong on lockdowns early on and encouraged the population to go home and stay there for the best part of six weeks. Communication was crucial, which seeing our occasional press conferences and limited number of permitted questions from reporters shows a different approach from ours. It was important to win people’s hearts and minds, not just have them think officials were saying do as you’re told.

Even so, Bahamians know by now what we are supposed to do – we have been told often enough what the simple steps are to prevent spreading the virus. We know about washing hands, wearing masks and keeping our distance. We just don’t do it enough – as occasions such as that junkanoo rushout show.

There is one more lesson our own government can surely observe from New Zealand, which is that if people think you have done a good job there will be a political reward. A landslide victory is a fitting reward for anyone who deals with this virus successfully. There is still time for Dr Minnis to turn this around – but he’s going to need us all to be united if he is going to reap his personal rewards.

Sorry, but both countries being surrounded by water is where the similarities end.

New Zealanders are generally better educated than Bahamians, both because of their educational system, and the desire of their young people to learn.

New Zealand has a strong healthcare system and infrastructure.

New Zealand doesn't put all it's development into one city or town (i.e. Nassau).

The gap between the have's and have-nots is significantly greater in The Bahamas (i.e. no middle class).

I could go on and on, but I just thought of another similarity between the two countries, - they both drive on the same side of the road.!!

The president also appears to be intelligent.

Ms.Jacinda Ardem is the prime minister of New Zealand and not president.

New Zealand is not a republic, it has a governor general.

The reason they got the virus under control in April/May is because Dr Sands and team urged them to shut the border. That was the right thing to do, with exception that they denied Bahamians entry to their own country.

We are an isolated community. This should have been easier to control. but under the guidance of the Competent Authority and Health Minister Dr Minnis, and unlike New Zealand, we threw away the most valuable weapon we had again at the virus...a border

Agree with the comments here. Many differences for better and worse. NZ is not a major transit point. The main reason I think NZ was able to do this is they have the habits built in over decades of protecting their agriculture sector. Let me tell you what happens when you land in NZ, to stay or connect: The aircraft is stopped and everyone remains in their seat while the cabin is fumigated by the crew. An aerosol literally being sprayed over all the passengers and surfaces with no objection. No asking what that is. No demands for personal exemption because I am special. No nothing. Period. After a 5 minute wait you get to disembark and face many questions from the nicest, but very detailed, border agent. Then they check your bags for unwanted items like foreign species of plants, animals, insects. They don't take your work for it. This system was the developed to protect the critical agriculture sector decades ago and is universally respected for it's purpose and effectiveness. I argue that this National training and awareness enabled the Kiwis to organize against a similar unseen common threat.

Fiji may be a better comparison here but they also have done very well with the virus. Fiji is also an island nation heavily dependent on tourism. Their population is about 885,000 and they have had only 32 cases and 2 deaths. I would urge the Bahamian government to contact the Fijian virus team and learn as much as possible from them and implement those policies that work. This is a global pandemic. Why not learn from those who are beating it?

Whether we like it or not, Minnis would have been damned if he did or didn't when it came to keeping the border closed. The choice is either you destroy your economy, or increase the risk of COVID being spread among your populace.

Reopening in July was absolutely the correct thing to do, we are a tourism based economy whether we like it or not, and this level of spending is completely unsustainable; however, I would have personally not allowed for the 72 hour loophole for travel to and from the US. By all accounts, the health visa process was working perfectly, and it was the Bahamians traveling to Florida taking advantage of the 72 hour testing exemption that are responsible for the resurgence in cases.

Either way, the cat is out of the bag at this point. We need to ditch this lockdown nonsense, destroying our economy for 365 deaths a year (I think our average is 1 death a day, correct me if I am wrong?) is complete foolishness. Has the government looked into hydroxychloroquine, regeneron's drug, or any other potential treatment? The effects of the crime pandemic that will coincide with sky-high rates of unemployment are going to be more disastrous than the effects of COVID. We are cutting our nose off to spite our face with lockdowns.