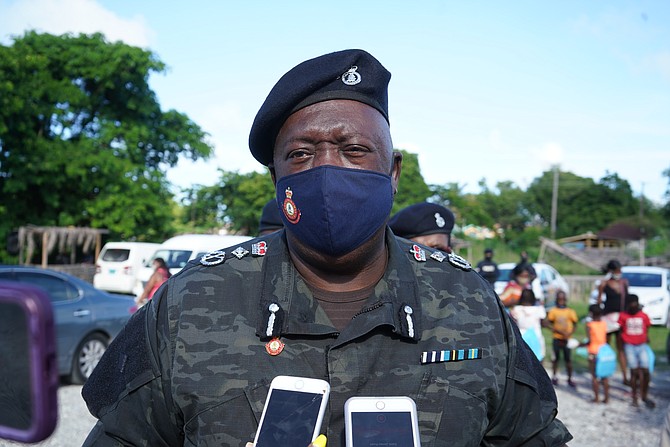 COMMISSIONER of Police Paul Rolle revealed on Friday that there have been 218 COVID-19 cases in the force to date.

Mr Rolle detailed the case numbers as he gave out personal protection equipment (PPE) and refreshments at Englerston Park.

“When I did the assessment on Monday... the number of infections to date at that point was 218,” he told reporters.

Earlier this month, the Royal Bahamas Police Force’s total number of confirmed cases was at 165, including officers and civilian staff, revealed during the Ministry of National Security’s press conference.

Meanwhile, the commissioner said members of the public have been calling the COVID hotline when asked about complaints of social gatherings. He added police have been responding and taking action.

“We went to a location I believe on Mount Royal Avenue and not only did we ticket the owner but we also issued citations for the patrons that were in that place illegally,” he explained.

Everyone will get Covid. It is VERY contagious like the flu and like measles and like all kinds of other diseases that spread and our bodies deal with naturally using the powers within it given by God. Nowadays men think they are smarter than God. How many people are we going to cause to die from the lockdowns?

Maybe we need a new slogan. "Wear a brain - prevent the spread of lockdowns."

The WHO now confirms Covid-19 was loose and spreading around the world in the early fall of 2019. Months before it was discovered in China and that country started its battle with the disease. This may explain why the US death rate for 2020 is 30% higher than 2019, not including covid-19 related deaths.