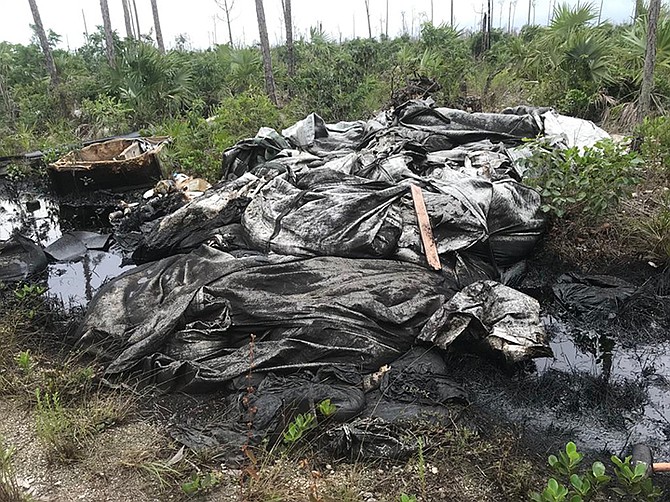 AN active police investigation is underway in connection with the discovery of illegal oil dumping in the Barbary Beach area of East Grand Bahama.

Supt Terecita Pinder reported that samples were collected to assist police with their investigation to help track down those responsible. She noted that police are following some leads.

“We are not taking this lightly; we are taking it very seriously,” warned Supt Pinder on Monday following last week’s discovery.

Shortly after 11am on Wednesday, October 21, she said the police became aware of a video circulating on social media regarding the indiscriminate dumping of oil in the area of Barbary Beach at Elton Road.

The exact quantity of the oil and when the dumping occurred are not known.

“We do not know what type of oil it is, and samples were taken, so, in due course, we would have that information, and that should also help us in our investigations.

“We cannot say how much oil it was, but it is a large amount of oil that was dumped,” Supt Pinder said. “We cannot give a definite date, but we believe those bags were not recently placed there; we believe they were there for some time.”

She noted that officers of the Northeastern Division, the Criminal Investigation Department, and the Fire Department are a part of a team that is conducting investigations into the matter.

Officers have visited numerous industrial companies and sub-contractors of those companies as part of their investigation.

“We are following some leads; we are at this time looking in all avenues. As you know, this dumping has significant environmental effects, and it affects the entire GB community. The RBPF does not take it lightly, and we are following all leads to find out who the culprit/culprits or company/companies involved,” stressed Supt Pinder.

In terms of criminal charges, the police official said that they would consult with attorneys at the Attorney General’s Office about charges that will be brought against the offenders.

About the cash reward being offered for information leading to the capture of the persons responsible, Supt Pinder said it is not something the police department is offering.

“That is something separate from what we are doing; we are focusing on the investigation itself,” she explained.

Mr Turnquest said that it is a cause for serious concern and impacts the safety of residents and harms the environment and that those responsible will be held accountable.

GB DEVCO has taken steps to clean up the hazardous material. Lucaya Service Company (LUSCO), a maintenance company of GB DEVCO said there is zero-tolerance for such action.

They are advising residents who require more information about the proper disposal of garbage and waste materials may contact the LUSCO hotline at 350-9016 or email info@lusco.org.

So if Bahamians dump oil, it is a problem. If a giant corporation spills untold amounts of oil during a hurricane, we hear crickets - and talk of goats and birds. If a Bahamian clears Crown land in Andros to build a house, it is a problem. If illegals do the same, we are told "They have work permits."