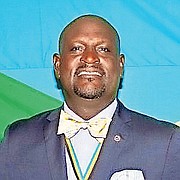 The Public Hospitals Authority's (PHA) procurement chief is appealing the dismissal of his defamation lawsuit against an auditor's findings that alleged he "abused" his employer's tendering process.

Dr Marvin Smith, who heads the PHA's Supplies Management Agency, and his attorney last night confirmed an appeal had been filed after the action against John Bain and his accounting firm, UHY Bain & Associates, was struck out after being deemed "frivolous, vexatious and an abuse of process".

Both Dr Smith and his attorney, Clinton Clarke, declined to comment further because the appeal against the July 14, 2020, Order by the Carol Misiewicz, the Supreme Court deputy registrar, is now live before a Supreme Court judge.

However, the latest ruling effectively revives the controversy surrounding Mr Bain's six year-old forensic investigation and report into the PHA's supply chain management and procurement practices, with the findings remaining a contention that will seemingly not go away.

Dr Smith, in his October 16, 2014, claim had sought "exemplary and aggravated damages" from Mr Bain and his firm after they reported that he allegedly "circumvented the tendering process" at the PHA by ordering "urgent" pharmaceutical supplies from what appeared to be "a shell company" that received its Pharmacy Council registration just three days before the deal occurred.

The then-acting Bahamas National Drug Agency (BNDA) vehemently denied the allegations, alleging that the report - which asserted that the PHA was "defrauded out of over $11,500" in the transaction - had damaged his personal and professional reputation, and brought him into "public scandal".

Mr Bain, in his report that was submitted to the then-PHA Board, headed by former PLP Senator Frank Smith, wrote: "Our investigations uncovered details of at least one abuse of the tendering system when Dr Marvin Smith, deputy director of BNDA, circumvented the tendering process by ordering 'urgent' supplies that apparently were not in demand, that benefited a supplier, National Supply Inc, who was not at the time the approved supplier for the oncology drugs ordered."

Suggesting that the transaction was carried out in "questionable circumstances", Mr Bain added: "The amount of drugs ordered were not supplied, and the receipt of the drugs was certified by the same person ordering, Dr Marvin Smith.

"Additionally, the internal auditors found evidence that the receiving documents may have been altered from the original invoices from 200-Docetaxel 40 mg and 200-Oxaliplatin 200 mg to reflect a receipt of 400-Docetaxel 20 mg and 400-Oxaliplatin 100 mg."

National Supply Inc, according to Mr Bain, was not a listed BNDA supplier when the deal was approved in May 2011, and obtained its Pharmacy Council registration on an "emergency" basis just three days before the transaction.

"The total orders of the drugs were not delivered, yet no documentation for the back order was prepared. Instead, the original invoice was modified to reflect a different quantity received," Mr Bain wrote.

The accountant, who was hired by the PHA to conduct the forensic examination, added that National Supply Inc "appears to be a shell company, quickly established for the purpose of transacting with the BNDA".

He added that it seemingly had no physical presence, and used the 'All My Children's' Plaza' on Soldier Road as its address. A second address provided for National Supply Inc at Sandyport turned out to be the offices of a now-defunct Bahamian broker/dealer, Gibraltar Global Securities, whose principal, Warren Davis, held the newly-incorporated drug supplier's Business License.

Gibraltar ultimately ceased trading after being hit with numerous legal actions and fines by US and Canadian securities regulators, with the Securities & Exchange Commission (SEC) ultimately obtaining a near-$25m summary judgment against the company and Mr Davis. There is nothing, though, to suggest they did anything wrong in relation to the National Supply Inc deal.

Since filing his defamation action against Mr Bain's findings, Dr Smith has been promoted to head the PHA's Supplies Management Agency - which combines the BNDA's drug pharmaceutical purchasing with the ordering of medical and surgical supplies.

The agency will now have responsibility for sourcing the necessary COVID-19 drug and other supplies, including personal protective equipment (PPE). Dr Smith, who is also listed as a PHA deputy director and chief pharmacist, is also president of the Caribbean Association of Pharmacists.

The Supreme Court's dismissal of his defamation claim appears to be rooted in its acceptance of Mr Bain's argument that Dr Smith and his attorneys were failing to progress the matter to trial, and that the case was merely designed to gag or muzzle further discussion of his report. It makes no mention of the documents findings and conclusions.

Mr Bain, in a January 13, 2020, affidavit, alleged: "Despite being served with the application for the matter to be struck out, the plaintiff [Dr Smith] has failed, refused or was unwilling to advance this matter to case management.

"Despite multiple appearances before the court, counsel for the plaintiff has appeared on one occasion and, since 2015, when pleadings were closed following the filing of the defence of the third party [PHA], there has been no case management hearing or any application to advance this matter to trial.

"The instant matter has lingered for the last five years, and has resulted in several losses of opportunity. I am eager to move on with my professional and personal activities as the instant action has also affected insurance premiums and risk assessments."

However, Dr Smith, responding in a February 12, 2020, affidavit alleged that the case's progress had been delayed due to its transfer between judges and the passing of two of his attorneys. "I still desire to have this matter set down for case management and thereafter to proceed to trial as I do believe that the report produced by [Mr Bain and his firm] is erroneous and very defamatory in nature," he argued.

Mr Bain, when contacted by Tribune Business, said Dr Smith would have to pay his attorneys, Davis & Co, "five years' worth" of legal fees if he wanted to appeal the deputy registrar's Order.

"I don't know if he has. I don't care if he does. As far as I'm concerned the matter is resolved," Mr Bain said of an appeal by Dr Smith. "He had the right to go and pursue it, and seek legal redress if he felt he was wronged. Our system works, and the court has thrown out the case as being frivolous, vexatious and an abuse of process."

Tribune Business's efforts to discover whether the PHA and the Government acted on any of the findings, recommendations and calls for follow-up investigations in Mr Bain's report suggest that it was effectively shelved, or buried, given the significant push back it received from the health authority's management - including the BNDA that was headed by Dr Smith.

He added that the PHA's internal auditors "indicated that staff had 'requested and received' contributions from vendors during the Christmas holidays that created a conflict of interest. The staff received $7,660 cash donation for a Christmas party....The auditors understood other gifts of cash and non-monetary forms were received".

However, some of Mr Bain's other findings, such as the $10m difference between the pharmaceutical inventory's physical count and what was reflected in the Princess Margaret Hospital's computer system, were vigorously refuted and dismissed by PHA management.

PHA executives blamed the discrepancy on a clerical error, with Daniel Knowles, the finance director, saying at the time he found it “difficult to believe” that the internal auditors, on whose work Mr Bain’s auditing partly relied, did not recognise the errors in their report given that PHA’s total yearly inventory never exceeded $4m.

He added that the errors existed because the unit values for two drugs were incorrectly entered into the PHA’s inventory system, and that the pharmacy inventory for PMH had not exceeded $1.5m for 2012 or 2013.

Julian Rolle, the PHA's chairman, referred Tribune Business to Lyrone Burrows, the PHA's deputy managing director, who referred to the clerical error described at the time Mr Bain's report was completed and released. Neither man was present then.

However, a PHA insider, speaking on condition of anonymity, downplayed the "shell company" allegations and other concerns relating to Mr Bain's findings on the transaction involving Dr Smith. "The system at the time only required for you to have the pharmacy licence," they said. "It didn't say you needed to have a licence for one year before or three years before."

They confirmed that Mr Bain was hired to review the PHA's materials management, including both pharmaceutical management and the procurement of medical and surgical supplies, in a bid to maximise efficiencies, value for money and accountability.

The source suggested that Mr Bain's work was overtaken by a Pan American Health Organisation (PAHO) consultant, Dr Valerie Kerr, who oversaw the consolidation of the BNDA and its medical/surgical supplies counterpart into the existing PHA Supplies Management Agency based on Shirley Street.

Since filing his defamation action against Mr Bain's findings, Dr Smith has been promoted to head the PHA's Supplies Management Agency - which combines the BNDA's drug pharmaceutical purchasing with the ordering of medical and surgical supplies.

And we wonder why we have an under-resourced and dysfunctional public healthcare system. Simply unbelievable!

in the Bahamas it's never been what you know, it always WHO you know

Makes you wonder if Minnis and Smith are partners in a highly lucrative 'special' business venture.

This man is not a Minnis fan - far from it. Therein may lie the problem.

You never really know who's friendly with whom just by outward appearances. After all, many Bahamians still don't know that Christie and Ingraham were at one time partners in the same law firm and have always been the best of friends.

Several years ago it was said that about $100 million was wasted in the heath care system annually! This may be a part of the reason why!

A senior Government medical official has admitted that around $100 million, or 25-30 per cent of its annual healthcare spending, is wasted.

The stunning admission by Dr Glen Beneby, the Government’s chief medical officer, will likely ignite further debate over whether the Government’s stewardship and governance systems will be able to ensure ‘value for money’ with the bigger funding pool it is seeking for National Health Insurance (NHI).

Dr Beneby, a panellist at a recent NHI discussion hosted by the Economic Society of the College of the Bahamas (COB), said the Government was spending $400 million annually in the public health care sector.