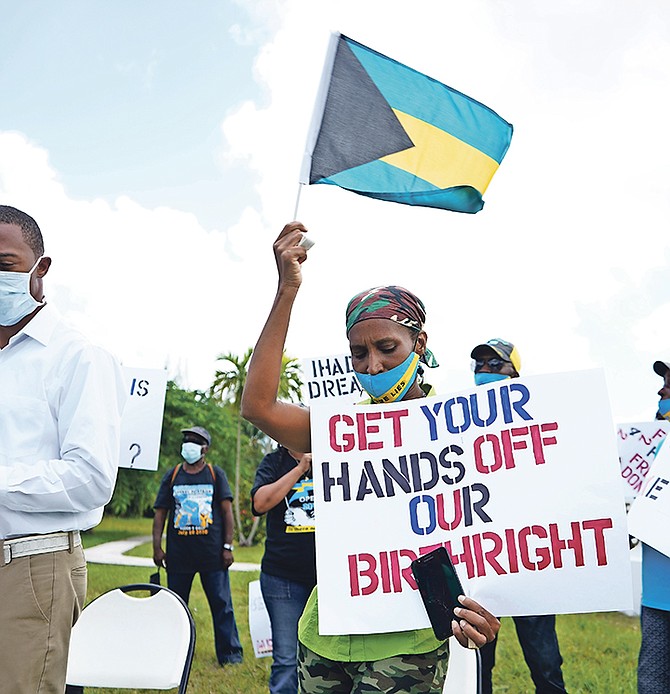 A GROUP of people protested outside the Ministry of Finance yesterday, calling for more clarity and accountability about the government's finances.

"We are asking for an accounting of all the resources given to us as a country," said Adrian Francies, founder of Operation Sovereign Bahamas.

"Are we going to take a pay cut in the civil service? We need to know exactly what's going on with the police, the doctors, the nurses and everything else," he said.

As he spoke, protesters chanted "No more lies" and "Where is the money?"

The protest came days after the Ministry of Finance released its budgetary performance report for the fourth quarter of the 2019/2020 fiscal year. The report said preliminary data indicates an estimated threefold hike in the fiscal deficit, to $788.1m from $219.3m in the 2018/19 fiscal year -- when the government achieved the lowest fiscal deficit in over a decade.

The document revealed that total revenue decreased, "year over year", by $337.1m. It noted that these results show the combined impact of "slower economic activity" in Abaco and Grand Bahama due to Hurricane Dorian, as well as the reduction of business activity amid the COVID-19 crisis.

Good for you Francis. It’s time people stand up and demand answers. Also, ask where all the money that people gave for hurricane Dorian victims. Audit those handling the money. I saw yesterday that the PM ordered all of these vaccines from Bill Gates audit him first. He is selling the Bahamas to the devil.