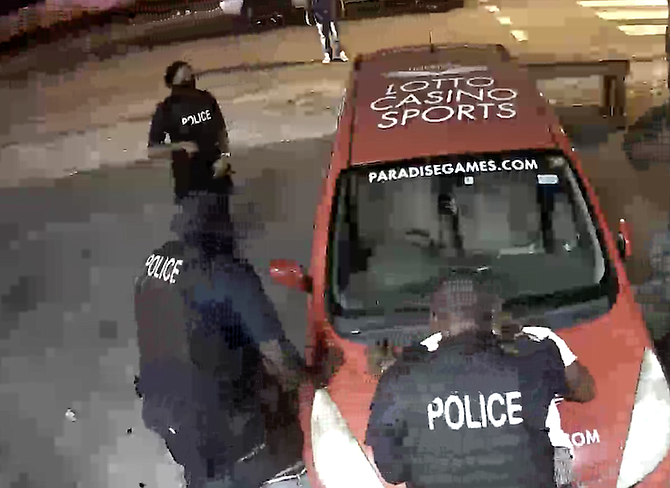 A still from the surveillance footage.

A POLICE officer has been placed on administrative leave pending the outcome of an investigation into excessive force after surveillance footage showed a man being body slammed and kicked during an arrest.

The Royal Bahamas Police Force last night said it is aware of a video circulating on social media “regarding an incident depicting images of a police officer effecting an arrest using force”.

“Commissioner of Police Paul Rolle has ordered an immediate investigation into this matter by the Deputy Commissioner to determine the exact circumstances surrounding the incident,” the RBPF added.

“The officer (concerned) was placed on administrative leave pending the outcome of the investigation. The Royal Bahamas Police Force wishes to maintain a professional standard and a good working relationship with members of the public. We ensure that this matter is investigated in a timely manner with the results brought to the public's attention.”

Although police did not specify the video in question, surveillance footage made the rounds on social media yesterday showing officers arresting people on Saturday, August 29, outside a nightspot around 8:40 pm.

In the video, several people are seen scattering in a parking lot without masks, and some with what appeared to be alcoholic beverages, as police tried to break up an event.

An officer in blue is then seen grabbing an apparently unarmed suspect from behind before throwing him to the ground as a beer bottle breaks underneath him. The man tries to get up but the officer pins him to the ground by placing his knee on the man’s back for several seconds.

While this is going on, people are seen running from the scene and other police officers nearby are making arrests.

The suspect on the ground is seen trying to adjust his position prompting the officer to stomp him on his back. The officer then leaves the suspect and walks away briefly before returning to push the man, who appears hurt as he tries to get up, back on the ground. The officer leaves for a final time to pursue other suspects, while the suspect staggers and braces himself against a car for support until another officer appears on the video and detains him.

Police have asked anyone with information on this incident to contact the Deputy Commissioner of Police at 302-8416 or 302-8420.

Bars and clubs are prohibited from opening under COVID-19 emergency orders and police have made several arrests at these venues lately.

Yeah, will anything come out of this?? These police officers get away with murder (literally) and they are hardly ever held accountable. smh
Beating up suspects seems to be the RBPFs national pastime.

Minnis's arrogant, nasty and vindictive nature is setting the tone from the top for our police force when it comes to such egregious and blatant instances of unnecessary force and outright brutality. Depending on the level of public outcry, Commissioner Rolle may decide to announce an internal investigation but we all know nothing would ever come of it. And Commissioner Rolle knows how much Minnis loves to see disobedient and/or unruly members of the public get a royal spanking in order to set an example for what will happen to others who similarly misbehave.

Wow! To say this was excessive is an understatement.

Did anyone notice the law was bring broken here? Ppl are trying to evade arrest...No mask, no distancing, no wonder Nassau has this high COVID count, and then we still turn around and blame the Gov't for the high count...

Exactly! This is precisely what I’ve been trying to explain. We blame Dr. Minnis for the rise in COVID19 infections when really we need to take a closer look at all of these noncompliant, unruly Bahamians walking about. Some of them don’t have masks on and those that do are not wearing them properly. Bahamians have become a disorderly, lawless bunch.

nut he is responsible masks or not. our cases were going down to nil. then he rushed the border opening.