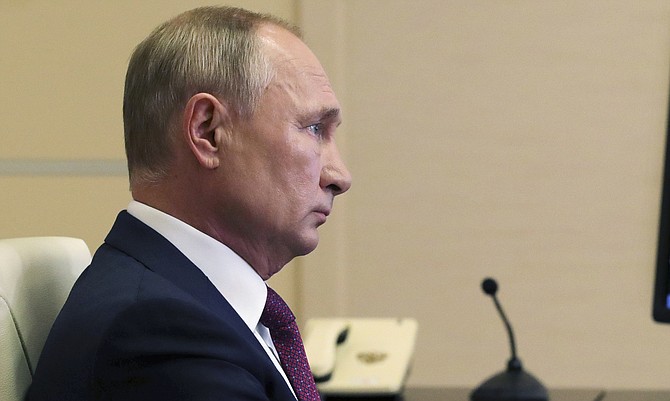 Since the US mainstream media is understandably preoccupied with the forthcoming presidential election, it has provided little coverage of the recent poisoning of Alexei Navalny, the Russian anti-corruption campaigner and vociferous critic of President Putin. But this attempted assassination has resulted in international outrage. It has been condemned by European countries in particular, and it ought to be publicised more widely.

Mr Navalny was taken ill on a flight back to Moscow after a visit to Siberia on August 20. His plane was forced to make an emergency landing in the Siberian city of Omsk where he was taken to hospital. Doctors there claimed there was no evidence of poisoning and he was later transferred to a hospital in Berlin where he was placed in a medically-induced coma. He has since recovered consciousness but remains in intensive care.

The German government has stated there was ‘unequivocal proof’ that Mr Navalny had been poisoned with a nerve agent of the Novichok group. Reportedly, this deadly poison was developed by Soviet scientists during the Cold War and, as a dangerous and sophisticated substance, could only be under state control and therefore hard to get hold of or to use. Chancellor Merkel has said publicly the German government strongly condemns the attempted murder of Alexei Navalny and that, seeking to ‘silence’ an opponent of Mr Putin in this way posed ‘very serious questions that only the Russian government can answer – and must answer’.

For his part, Prime Minister Boris Johnson has also demanded an explanation from the Russians, adding that Britain would work with international partners ‘to ensure justice is done’ – and to hold Russia accountable for the use of Novichok. The Organisation for the Prohibition of Chemical Weapons (OPCW) has declared that ‘any poisoning of an individual through the use of a nerve agent is considered a use of chemical weapons’ and that such an allegation is a matter of grave concern. The 1997 Chemical Weapons Convention, of which Russia is a signatory, outlaws production, stockpiling and use of chemical weapons – and this means use anywhere, so the poisoning of Mr Navalny cannot be considered as a purely domestic issue for Russia.

At the weekend, British Foreign Secretary Dominic Raab spoke strongly in favour of a coordinated international response to what he described as ‘Russian gangsterism’, saying it was hard to believe the poisoning of an opposition leader on Russian soil was not a state-backed operation. These remarks are being seen, of course, against the background of the 2018 attack – claimed by the UK to have been carried out by Russian operatives – on the defector Sergei Skripal and his daughter who were poisoned with Novichok in Salisbury in the south of England but survived. A British woman, who inadvertently had been exposed to this poison, later died.

In the UK, there was also the case in 2006 of the death - after being poisoned by polonium - of Alexander Litvinenko, a former Russian intelligence officer who became a critic of the Kremlin and fled to London. An official inquiry into his assassination concluded it was ‘probably approved’ by Putin himself.

Inevitably, Moscow has dismissed the allegations of involvement in the poisoning of Mr Navalny, with a Kremlin spokesman saying Russia rejected any suggestion of responsibility for it and warning other countries not to jump to conclusions without any evidence.

According to the news organisation Al Jazeera, the Russian government has instigated a probe into the possibility that someone had tried to murder him though it maintains there was no evidence yet that a crime had been committed. But many in the West see this as typical hypocrisy and obfuscation, not least because of Russia’s record of previous attacks on high-profile critics or opponents of Mr Putin, including politicians, intelligence officers and journalists – as has been said, this is Putin settling old scores and eradicating perceived traitors.

So what is likely to happen now? There have already been calls for tougher sanctions than in the Skripal case when diplomats of a number of countries were withdrawn. Chancellor Merkel has said Germany will consult its NATO allies - and the UK government, in following up the Prime Minister’s remarks, has committed to working with allies and international partners in order to demonstrate that there are severe consequences for the use of banned chemical weapons.

Russia is already under international sanctions because of its annexation of the Crimean peninsula in 2014 – including being suspended from the G8 - and its backing for rebels in eastern Ukraine. Western countries could, however, consider new targeted travel bans and asset freezes, diplomatic expulsions and further economic sanctions, including making it more difficult for Russia to make international financial transactions. However, judging by Chancellor Merkel’s commitment to the Nord Stream 2 pipeline being built to carry natural gas from Russia to Germany, it is unlikely that that important project will be under serious threat.

Having commented in this column three months ago about the merger of Britain’s Foreign and Commonwealth Office and its Department for International Development, it is interesting now to take stock of what has happened in the meantime.

The UK’s aid budget has already been adjusted to respond to the COVID-19 pandemic with the pledge of some $975m to help stop the spread of the virus across the world and to find a vaccine and save lives. The UK is calling for stronger international consensus to tackle this and, in particular, the increasing risk of famine in developing countries because it is important to help the world’s poorest in the biggest threat the international community has faced for decades.

There is insufficient space today to expand on this and on the issue of aid more broadly so I propose to return to the subject in next week’s column.

New hands at the helm starting to make sense

Recently, I have written on two separate occasions about the BBC. First, concerning its left-wing bias and lack of impartiality and, secondly, in connection with its decision to end the existing system of free TV licences for those over 75-years-old and thus placing a new financial burden on pensioners.

I return to the BBC again today because there has been an unexpected and significant development with the emergence of a new and reforming Director General of the corporation who is evidently keen to shake off the long-standing criticism of its lack of impartiality and objectivity.

Many people depend on Britain’s renowned public broadcaster for reliable information about events both at home and around the world; and, for all its perceived faults, the BBC remains a fine source of news. But there are concerns about its intrinsic left-wing, metropolitan and - in the last few years - anti-Brexit bias. Moreover, according to some reports, most recently BBC News has come under unprecedented pressure from activists within the organisation determined to impose their own political agenda.

To the outside observer, it should not be the role of the BBC to try to change society to meet the demands of pressure groups but rather to inform the public and to analyse events in an objective and fair-minded manner so that people can make up their own minds about important issues. Journalists should report the facts and present both sides of an argument but not set themselves up as a mouthpiece for a particular cause and, all too often, putting across their own political ideology.

In the view of many – perhaps that elusive so-called silent majority – the BBC has given too much attention to the views of attention-seeking agitators as if they represented the conscience of the nation.

For example, a former editor of the BBC’s flagship current affairs Today programme is on record as slamming ‘entitled young staff who expect to have their view of the world on air’ and she conceded respect for the rules about impartiality had weakened.

Against this background, the new and 17th Director General of the BBC, Tim Davie - who only assumed office on September 1 - has already set out his views in a major policy speech about the future of the corporation. He said the BBC should be ‘about being free from political bias and guided by the pursuit of truth, not a particular agenda’. That meant a recommitment to impartiality and what he called ‘diversity of thought’ but that did not imply ‘abandoning democratic values such as championing fair debate or an abhorrence of racism’. He told staff if they wanted to be opinionated columnists or campaigners online, they should not be working at the BBC.

Interestingly, one of Mr Davie’s first actions was to overturn the ludicrous ban - imposed for political correctness reasons - on singing traditional patriotic songs like Rule Britannia and Land of Hope and Glory at the Last Night of the Proms. This is the climax of the BBC’s eight-week summer season of promenade concerts of classical music at the Royal Albert Hall in London, and the boisterous singing at the end is a long-standing tradition. Commenting earlier about this issue, Mr Johnson had said it was time ‘we stopped our cringing embarrassment about our history’.

Large numbers of people up and down the country - as the BBC’s listening and viewing customers - will be heaving a sigh of relief that finally some good sense is being applied at the BBC which, as a public broadcaster, remains an important institution in their lives. Whether the new Director General’s radical approach, which is already facing resistance from the so-called ‘woke’ group within the BBC, will result in real reform remains to be seen. But, in the opinion of many, his proposals and decisions have come none too soon as it has been revealed that shortly the government will be setting out a ‘road map’ for reform of the organisation.