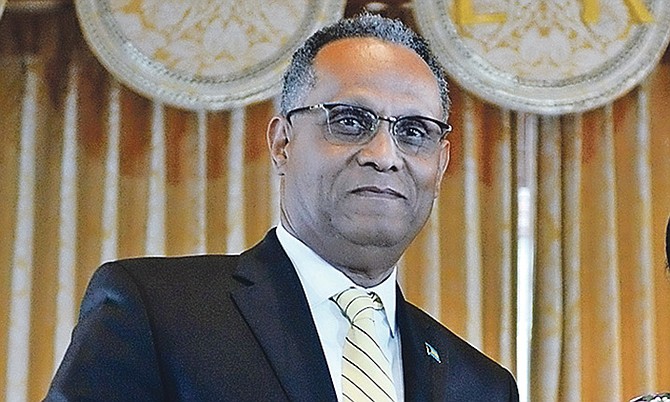 Yesterday, PLP senator and the opposition's spokesman for education, Dr Michael Darville issued a statement lambasting the government for the decision, saying the parents and stakeholders in the community of Mayaguana are opposed to it.

"I again note the continued demonstrations by parents and stakeholders in the community of Mayaguana on Monday, September 7 in strong opposition to the confusion being caused by the government's decision to 'amalgamate' the public school system there," Dr Darville's statement read.

"The government's proposed amalgamation of the primary and secondary public schools in Mayaguana is widely regarded in the local community as a regressive education policy and a move backwards to the outdated 'all age school' education system."

Director of Education Marcellus Taylor said the decision to amalgamate was made based on the population on Mayaguana and the number of school aged children on that island.

"In many of the southern islands of The Bahamas, we have had diminished enrolment in schools as the communities have diminished populations. Places are becoming more urbanised, people leave the rural areas and go to the urban areas. And, because that happens, we have the challenge of getting resources in place to offer the type and quality of service we would've liked," Mr Taylor explained.

"Now when we look at the school age population in Mayaguana, what we have there is a school enrolment of 39 children. And, we are utilising a building that has historically accommodated that amount of students when it was based on only one settlement. We are not of the opinion that we will have any problems accommodating the students. In addition to the school building that is there, we are using one of the buildings that is in the community. So this process of amalgamating schools is to maximise the resources that we have."

Dr Darville also has a problem with the building proposed for the amalgamation. In addition to that, he doubts it will be ready for the October 5 opening of school.

"Also, the proposed refurbished site in Pirate's Well - the old lodge hall building - is inadequate, not COVID-19 compliant and the refurbishment cannot be completed in time for school opening," Dr Darville's statement continued. "Additionally, the proposed administration building at the closed high school location in Abraham's Bay is considered too inaccessible to the general public."

Mr Taylor explained that Mayaguana originally had two schools - one in Abraham's Bay and one in Pirate's Well. The amalgamated primary and secondary schools will now operate out of Pirate's Well and the Abraham's Bay school will now become offices for the island administrator who was looking for a space to operate.

"The teacher resource is the first and most important thing we look at; that we have to ensure that we have sufficient teachers to cover the student enrolment and also the physical plant and our ability to maintain it and to outfit it with all the things we feel they need to put in place. Amalgamating the school is one of the ways in which you do that," he said.

"We are in the process of renovating and refurbishing the building to make sure it can accommodate any overflow that we may have. We are quite confident and satisfied that what we are doing is in the best interest of the education and also the community. There are some people that claim that this isn't working for them, but when you look at what the claims are, it's not a claim against amalgamation, it's a claim against the choice of site."

Mr Taylor said the Ministry of Education is confident that it will be able to accommodate the children at the school by one of the three models - complete virtual, complete face to face or a hybrid. Whichever model is suitable at the time, he said, the ministry will employ.

"Look at government revenue in Mayaguana. I guarantee you, what we spend on just education alone is two or three times what the government takes in as revenue in Mayaguana. That doesn't mean we shouldn't be providing the service, but what it does mean is that we should be judicious in the way in which we provide those services so that we can maximise the resources we have."

In his statement, Dr Darville called upon Mayaguana representative Miriam Emmanuel to respond to "the plight of her constituents".

When contacted, MICAL MP Miriam Emmanuel said she was aware of the concerns.

"There is always, in my view, some justifiable reasons whether you accept it or not, why schools or some other project may not be completed at the particular time," she said. "I can assure you that whatever the situation is concerning the schools on Mayaguana, the matter is receiving urgent attention. The children of Mayaguana and education are of great importance to this government, the minister and myself. The schools will be completed in time as education is very vital to the development of our children and our nation."

I get it that the opposition is there to oppose, but sometimes an idea is good. If this saves money and still offers the Children an education what would be the problem?

The island of Mayaguana has a population of less than 300 persons.Merging those schools was a sensible and cost- effective decision.

This decision should not be a political issue.One of the problems we face and don't discuss here in the Bahamas is the uneven development of this country.Since the seventies,there has been a drift away from the islands in the south-east Bahamas except Inagua. Those islands may come close to being depopulated in the future.

As usual, talking before yinna read and understand what is being communicated!! That piece has plenty condescending drivel in it!! For example, no stakeholders input. . .telling government how it must be ran. . .the local community contribute little taxes so they should not expect "improved" facilities etc.!! On any levels in that piece the "the snide" connotations and angered comebacks suggest a person who is grasping at straws in trying to defend a poor decision!! The move that "he want to fix" was made in order to improve the teaching facility situation in that island as apart of MOE improvements project!! The decision was made in the past as a "school community "upgrade" on the island! So that unilateral decision to "go-back" to the old way was not well though out and the rambling "conch salad" of platitudes as justification for the decision only show lack of broad consultation among the stakeholders for that ministry. Just imagine, he implied that that school community has a poor/low tax based. . .they must expect no placement on the list for facility improvement on par with other "high" tax based school communities!! Awoa!!

What the director of the Ministry of Education said was an insult to the people of Mayaguana. I am surprised (maybe not totally) that such implications can come out of the mouth of someone supposedly "educated". All of our islands make up the one Bahamas. And regardless of their monetary contribution, which if really investigated stems from poor decision making and distasteful management practices by successive governments, each one of those islands still counts. The Southern Bahamas will one day rise. However, with people like the director at the helm, the rest of the Bahamas may not see the vision. Instead of building up those communities, he is helping to close them down. Shameful.

The PLP should question HOW and WHY these Southern islands are so deserted and depopulated .......... it is their own stupid policies of underdevelopment that has led to this sad state of affairs .......... The FNM did a little, but no real plan was put in place to DEVELOP these rural islands by either party (post 1967).