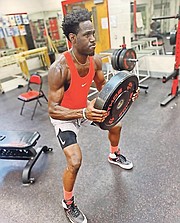 EVEN as a late bloomer in the sport, Grand Bahamian Donald Thomas has surged on top of the Bahamian chart as a high jumper, having won every medal possible except for the Olympic Games.

And while the Bahamian national record has also been excluded from his résumé, the former basketball player is eager to resume his season next year in the aftermath of the coronavirus pandemic.

Thomas, 36, is currently in Auburn, Alabama where he’s working out for his return to competition after he had his setback last year with a third degree hamstring on his jumping leg that hampered his performance at the 2019 World Championships in Doha, Qatar. “Everything is on slow go because you have to be cautious with what you are doing so you don’t endanger yourself,” Thomas said.

“For the mot part, I’m getting out there, still training.

“I really don’t go anywhere unless I go to train or to the grocery store. I’m back to 100 per cent since the hamstring in May, which prevented me from training and competing the way I wanted to last year. I couldn’t put in the work that I wanted to.”

With track and field put on hold since March when the coronavirus pandemic hit the world of sports, Thomas said he was looking forward to heading back to Doha to compete in his first meet this year and then another one in Rome.

After Doha was cancelled, Thomas opted just to make the trek to Europe for the one meet in Rome.

It would have been a good confidence booster for Thomas. But he decided to just focus on preparing for the 2020 Olympic Games, which was postponed in July to 2021 in Tokyo, Japan.

“It gives me more time to prepare because the high jump is a confident event to compete in,” Thomas said. “Coming off an injury, you’re not just going to jump high. You have to work yourself back into jump shape.

“I’m just determined to get back there. So the delay has given me more time to prepare for the Olympics.”

At present, Thomas is being coached by Luis Pinilo from Cuba. While he normally spends a couple months in Cuba under the supervision of Pinilo, Thomas video taped his training in Auburn and sent it to his coach to be critiqued. “I’m a veteran jumper, so I can take instructions very well,” Thomas noted. “That was one of the reasons why I’ve been so successful in the time that I’ve been competing in the sport.”

While attending Lindenwood University as a member of their Lions men’s basketball team in January 2006, Thomas was faced with a dare from one of his team-mates that he couldn’t clear the high jump bar. Once he did, the 2002 Freeport Anglican High graduate decided to venture further into the sport and the rest, as they say, was history.

Thomas, a four-time Bahamas national champion, went on to secure a medal in just about every major international competition he’s entered starting with a silver at the NACAC Under-23 Championships in Santo Domingo, Dominican Republic after he placed fourth at his debut at the Commonwealth Games in Melbourne, Australia.

The year 2007 was Thomas’ breakthrough with his first national title as he went on to pick up a silver at the Pan American Games in Rio de Janeiro, Brazil before he claimed the title at both the World Championships in Osaka, Japan and the World Athletics Final in Stuttgart, Germany.

After a deflated season in 2009, Thomas returned with vengeance with his second national title and his first Central American and Caribbean Games crown in Mayagüez, Puerto Rico.

Additionally, he claimed the Commonwealth Games title in New Delia, India and capped off the year with a silver at the World (Continental) Cup in Split, Croatia.

In 2011, Thomas ascended to the to of the podium as the Pan American Games’ champion in Guadalajara, Mexico with a leap of 7-feet, 7 1/4-inches.

After a dismal showing at the Olympic Games in 2012 in London, England, Thomas came back and was ranked at number six in the world in 2013 after he finished sixth at the World Championships in Moscow, Russia with a performance of (7-7 1/4).

After getting a third place at the Doha Diamond League in 2017, Thomas suffered the chicken pox at the Paris Diamond League, which put a damper on the rest of his season.

But a rejuvenated Thomas fourth placed at both the 2018 World Indoor Championships in Birmingham, Great Britain (7-2 1/2) and the Commonwealth Games in the Gold Coast, Australia (7-5 1/4) before he clinched his fourth national title (7-3 3/4).

That led to his second gold at the CAC Games in Barranquilla, Colombia (7-5 3/4); third placed at the NACAC Championships in Toronto, Canada (7-5 3/4) and his triumph at the World (Continental) Cup in Ostrava, Czech Republic (7-6 1/2).

But with the world’s biggest sporting spectacular being delayed until 2021 because of the coronavirus, Thomas said he’s rejuvenated in getting back to the top of the high jump world.

“The Olympic Games is the one medal that I haven’t earned yet,” he said. “That’s one of the medals that I need. So the plan is to just continue to train straight through the rest of the year to be ready for next year.

“Before the injury, I was a consistent 2.30m (7-6 1/2) jumper year in and year out. That injury last year was a humbling experience for me. I’ve learnt from it and I’m looking forward to getting past this.”

But Thomas said he feel the Ministry of Youth, Sports and Culture under Minister Lanisha Rolle and Director of Sports Tim Munnings are doing all they could to assist the athletes in preparation for the Olympics.

As a native from Grand Bahama, Thomas said it’s even more of a strain on the government having to assist people who were adversely affected.

“The key is to stay patient and listen to those in authority,” Thomas stressed. “They are the ones with the data, so we have to listen to them. You can’t just think about yourself, but rather your family members, especially those who are more venerable than you are.

“We have to protect them and stay out of the way of the persons who are in charge. We are all in this together and we need to come together and work as one to combat this virus.”

Additionally, Thomas said there are still a lot of people hurting from the effects of Hurricane Dorian last year, including his family members and friends, some of whom were killed.

“We, as Bahamians, are very resilient, so we’re doing the best we could to cope with all of this year,” he charged. “We will be back.”

And like the Bahamian people, Thomas wowed that he will be back at full strength to pursue his elusive medal at the Olympics next year.

“So whatever it take, I want to go to Tokyo and win the only medal at the Olympic Games that is missing from my trophy case.”