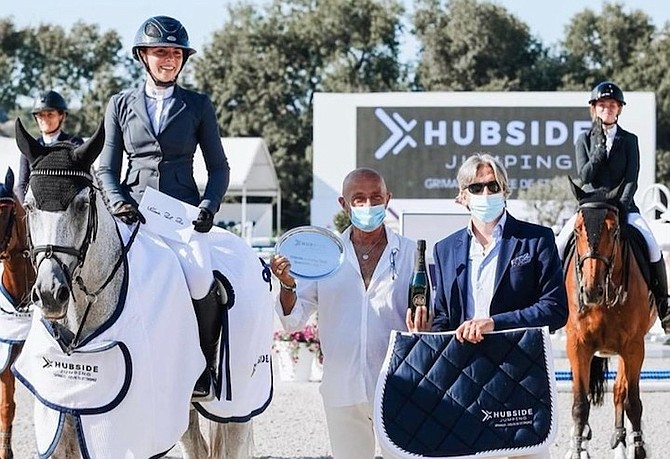 It was a great weekend for Bahamian Ana Camille ‘Millie’ Vlasov and her horse, Beaumont, at the Jumping du Golfe St Tropez Hubside 1* Equestrian competition in St Tropez, France.

At the end of the competition yesterday, 21-year-old Vlasov and Beaumont pulled off an emotional victory. It’s a step in the right direction for Vlasov, who hopes to qualify for the Bahamas at the 2023 Pan American Games and the 2024 Olympic Games.

“My horse gave his heart for the win and he was on fire,” she said. “It felt like I had wings this morning. I’m extremely pleased with the win this morning and can not describe the joy I feel for the Bahamas.

“It’s a small step in the right direction and it really shows that hard work pays off. I’m looking forward to my next show with him.”

Vlasov, who has been competing for the past three years with her horse, will be back in competition in the first two weeks in October at the same location where she hopes that she can duplicate her winning feat.

Due to the coronavirus pandemic, competition only got started in July, but Vlasov said she was just delighted to be back in action.

“I’m really thankful about the quarantine because I improved my riding so much and would’ve never been able to achieve what I did this weekend without my two wonderful trainers Gilles Bertrand de Balanda and Abdel Said.”

de Bslanda, who qualified for four Olympics, was the coach for the French World Championship and Nations Cup championship teams. She also coached Said, who also qualified for the Olympics for Belgium and is ranked 69th in the world.

Her mother, Pippa Vlasov, was also there lending her moral support.

“There are strict protocols for the coronavirus with mask wearing and hand sanitising,” said Vlasov, who is married to Peter Vlasov. “There are not many spectators allowed and social distancing is strictly enforced.”

Vlasov has been competing professionally for four years, but she’s been riding all of her life.

“I used to do a lot of pony classes and competitions in Wellington, Florida when I was younger,” she noted. “But I went to boarding school in England and the competition got very difficult to balance with school work so I didn’t compete a lot during high school.

“But when I finished, I wanted to ride. I was supposed to go to university and only ride for three month and I ended up staying almost four years and now riding full time.”

Cathy Ramsingh-Pierre, president of the Bahamas Equestrian Federation, was elated about Vlasov’s performance. “We are thrilled with Millie Vlasov’s performance this weekend,” she said. “She showed the excellent result of her hard work and training. We have high hopes for her and her horse going into major international games and we see this as a tremendous step forward for all Bahamian riders.”

Like the other sports, equestrian has a series of qualifying events for their competitors to participate in and Ramsingh-Pierre said the federation will be working with the Bahamas Olympic Committee in getting her to the Commonwealth Games, Central American and Caribbean Games and the Pan American Games.

“The Pan Am Games, which was scheduled for Panama in 2022, is uncertain because Panama pulled out,” Ramsingh-Pierre said. “The qualifications for those games are yet to be determined.

“But we have to wait for communication from our international Olympic body regarding qualifications for our athletes because we have another competitor, Marcus Davis, who trains with Olympian Ian Millar at Millarbrooke Farms in Perth, Ontario, Canada, who is also looking at qualifying for some international games in 2022 and beyond,” she added.

Thank you, Nassau Tribune ... we’re happy to hear that all is well with the society horsey set in St.Tropez, France. It’s wonderful. Why, I hear they even have electricity there!