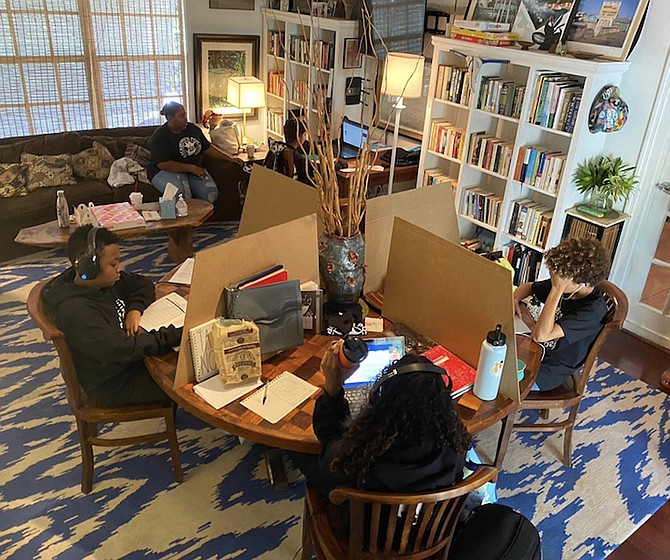 CHILDREN working together in the pod schooling arrangement.

WHEN the COVID-19 crisis shuttered schools in March, John Cox worried about his child’s attentiveness to virtual classroom lessons.

“He has some challenges focusing in school,” he told The Tribune, “and last term with him being alone, going through the Zoom sessions was very difficult.”

Anxious about the Fall semester, Mr Cox and his wife have banded with friends to create a learning pod. Increasingly popular in North America, learning pods assemble small groups of students together to facilitate learning and to maintain social interaction among them under the supervision of an adult.

“Those children with learning challenges and ADHD and those without those challenges, we think having them be together, sitting in a room and having that structure would alone make a world of difference,” Mr Cox said.

“We have eight parents in this group, six fall into the essential worker category and two are the owners of their own firms which also puts them into that category and that doesn’t afford any of us a chance to spend 40 hours at home looking at a screen. We might want to do that but there’s an economic part of this thing so it’s not practical to do so.”

Edward Bethel said he’s seen an improvement in his son’s attitude since the pod started on September 4.

“One of the biggest challenges is he’s the only son,” Mr Bethel said.

“When we were first locked in the house for six weeks, it started to impact him. The lack of social contact with his friends started to play on how attentive he was with the classes. He’s generally a pretty self-directed student in face-to-face settings but we could see that was changing and there was a disconnect just interacting with his teacher in classes. When John suggested the idea (for the learning pod) I thought it was really innovative and exciting and we threw our full support behind it. We didn’t even want to tell our son initially because we know how disappointed it would be in case it didn’t come through. When we told him, he was supper excited and the children have been fantastic.”

The Emergency Powers Orders allows people to operate home school programmes with no more than five students. Mr Cox’s group secured permission from the Ministry of Education to include an additional student in what they have named the “Blackbeard’s Pod”.

The children, all pupils of St Andrews, range from eight to 13 and are supervised daily by a teaching assistant. Their routine simulates a regular 9am to 3pm school day even as the children focus on their separate curricular. 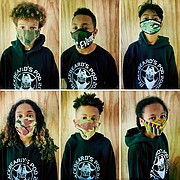 “The teacher assistant basically manages all of the six kids,” said Melinda Bacchus-Maynard, one of the parents. “We’ve given her a copy of their schedule so she knows the different classes they have, their break-times, their lunch-times, so she is basically their at home teacher.”

The parents hashed out plans for the pod over ten hours of Zoom calls and it took Mr Cox about two days to create an environment that could facilitate learning and adhere to social distancing rules.

“We try to make it as close to a school environment as possible,” Mrs Bacchus-Maynard said.

“Everyone has work stations with partitions so each child can concentrate and the house can support six users at a time online.”

Gordon McKenzie, the principal of St Andrews, visited the Blackbeard’s Pod and said he was impressed by the focus of the students.

“In a way I think they have the best of both worlds,” he said. “I couldn’t even talk to them because they were all so focused on their learning. That was great to see and they have one another, they could come together to eat, they’re probably a good influence on one another because they’re good students and that focus and hard work is influencing them. To work remotely but still have other students around you setting a great example, that puts the impetus on you to get in line and do the same thing.”

Mr McKenzie said one reason he visited the pod is to inform other parents about its benefits.

“Everyone’s situation is different, whether financial or quality of internet, so it’s not an approach that will work for everybody but it’s something I’ll be trying to encourage more families to at least consider,” he said.

No one knows how long the COVID-19 crisis will last, but Mr Cox, a strong advocate of St Andrews, said with Blackbeard’s Pod they have created something that can endure through the unusual era.

“If school needs to stay like this indefinitely the answer is we’ve built this strong enough for this to go on until the end of the school year,” he said.