DIANE PHILLIPS: Abaconians' anger is raging beneath the surface - we need to move now to make sure it doesn't explode 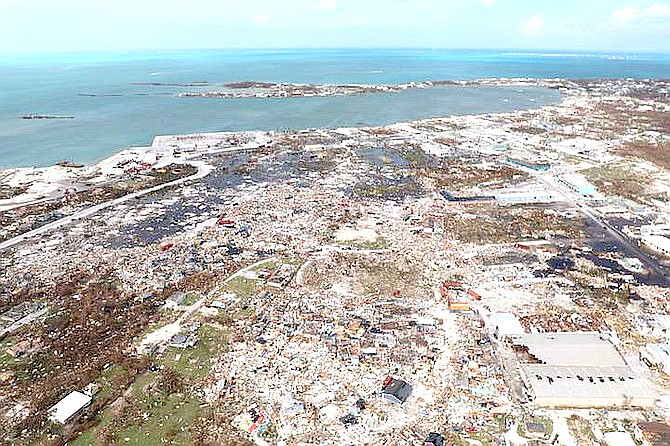 SEPTEMBER 2019; The destruction caused by Hurricane Dorian is seen from the air, in Marsh Harbour, Abaco, a year ago. In September 2020, people are scared for their lives, their property and the future. (AP Photo/Gonzalo Gaudenzi)

What’s happening in Abaco should never happen anywhere in The Bahamas.

How did these sun-dappled isles, just a year ago known as the laid-back, friendly, yachting capital of The Bahamas, slide into a state where nothing is safe and little is sacred? How did its thriving capital Marsh Harbour and the town’s outlying, historic settlements disintegrate from idyllic places where locals and second homeowners bonded into the kind of criminal pandemonium where one business, broken into six times since January, doesn’t bother to call the police because “they don’t answer the phone, they don’t show up, they don’t take a report”?

If you hear what Abaconians are saying, you will quickly conclude that in Abaco the culture of theft is spreading faster than the coronavirus.

“On Sunday, I gave one of our employees a new generator that had just come in, a small dual fuel 3kw. We had a big one in the store and he just wanted to run a fan in his house so I gave it to him,” says Hutton. “It was stolen eight hours later - while it was running. He didn’t even have it for a day.”

Generators are at a premium. With inconsistent power since Hurricane Dorian tore through the Abacos and Grand Bahama a year ago this month, and with water supply still not fully restored those who remain on the island depend on generators daily.

One resident, who spoke under the condition of anonymity, said all the police have to do is stop every pick-up truck going around one of the three roundabouts on Great Abaco if it is carrying a generator and ask to see the invoice or importation documents. “Everyone says, ‘Oh, my boss man gave it to me.’ Prove it with a letter of gift and if it’s new, with the invoice attached,” he suggests.

Lumber, tiles, PVC pipe, cable and other materials are stolen off job sites. Some say materials are stolen “as soon as they get here”. Another said houses in town that Abaconians and a few second homeowners are trying to rebuild or refurbish post-Dorian are “broken into so fast people are giving up trying to fix up".

Nearby, a new shanty town is growing, this time with solid concrete block homes and modern metal roofs. No one seems to know what to do about what they call “the problem", meaning poor people of diverse backgrounds, including Haitian, essential to the work force, but now homeless after Dorian swept out to sea the former shanty towns where they lived and where their micro-businesses flourished.

Minister of National Security Marvin Dames (right) in Abaco recently. Abaconians acknowledge there has been a slight uptick in police presence since publicity about crime erupted, but they believe it is a long way from where it needs to be.

While the rest of the country measures time in before-COVID and after-COVID, Abaco marks it in before and after Dorian.

Here’s Hutton again: “We got hit by an historic storm that was followed by a pandemic. I guess now we are waiting for an alien invasion.”

If Abaco is going to make a comeback before anger that is growing daily turns to rage and that rage explodes, two streams of activity must take place, according to various sources.

First, security has to be seriously stepped up. The last time residents felt safe, a few said, was when the Jamaican Defence Force was there. That was October of last year.

Abaconians acknowledge there has been a slight uptick in police presence since publicity about crime erupted, but they believe it is a long way from where it needs to be. They are angry and they want action to stop the stealing, They are calling for zero tolerance and no more looking the other way.

Robin Hood does not live in this forest where everyone, rich and poor and in between, is feeling the pain, they say. They no longer have a newspaper in which to express themselves. The Abaconian, too, was blown out to sea.

Secondly, if there is any hope of getting businesses, residents and second home owners to rebuild, government must extend concessions and exemptions for a minimum of another two years. Travel restrictions and quarantine requirements, while considered critical to COVID containment by the medical community, have all but wiped out the year of 2020 for rebuilds.

Part of the real tragedy of Abaco lies in the fact it had the chance to start over and become a model for a high-quality, admirable island lifestyle with green building, backyard farming and cottage industry. It could have learned from tradition, reinvigorating its boat-building industry that produced winners like the native sloop Abaco Rage, the famed Abaco dinghy and long before airplanes took to the skies, wooden ships that carried cargo and passengers. Abaco pine is still highly treasured and the skilled finish carpenters and craftsmen of Abaco could have created the equivalent of a High Point, NC hand-crafted furniture capitol in The Bahamas.

Abaconians have always been resilient but every individual and every community has a breaking point. This would not be the first time Abaco tried to take matters into its own hands. Remember the Abaco Independence Movement (AIM) when citizens of the northern isles decided to create their own nation as The Bahamas was itself becoming independent? That was quickly quashed by the British who threatened to send in marines, but right about now, Abaconians might just welcome some additional outside enforcers of the law.

Fiercely independent, proud and productive, Abaconians have often made their mark in the international arena.

Locals and expats who showed us the high road creating ambitious organisations known around the world like Friends of the Environment and Every Child Counts have been harshly tested by the double blows of Dorian and COVID-19. If they survived those threats to their lives, they deserve peace and respect or I fear the rage that lies just beneath the surface of this society will boil over and these islands, so sorely bruised by back-to-back hits and heavily armed for hunting, will be ablaze in a war of bullets and bloodshed.

Our government has shown that they have no idea what to do after a hurricane strikes a family island. This is not only bad for Abaco but should worry every citizen of the Bahamas that there is absolutely no plan in place to help islands that are hit in the future. NEMA is a total joke. To see crime running rampant on Abaco, with no police protection, and having the Security Minister declare that it is because no one has “offered” the police someplace to live is a total joke. Without the NGOs that are still there AFTER A YEAR there would be no drinking water. REALLY? I can’t wait for the election to try and get some competent people into office.

The big picture is that there is a Supreme Being overlooking this realm; one who gave us free will, but punishes when it is needed. The Abaco oligarchy has destroyed many lives, and now the Supreme being has intervened. In a vision from the Supreme Being I foresee Abaco being totally abandoned in the years to come.

For a nation to advance we first must leave dogma behind. I.e. leave the crazy delusional belief in a supreme being behind.

Chucky - Seems that you have fallen for the belief of so called evolution. It is a sorry state where one imagines that we are here by chance and consequently there is no ultimate evil nor ultimate good. Therefore, you assume that you can do whatever you want without accounting to a Supreme Being. Just get yourself a copy of Nature's IQ, by Balaz Hornyansky and Istvan Tasi; this is just one publication that dismantles Darwin's theory and it is filled with lots of pretty pictures.

This life is a classroom in which we are tasked to develop and live by righteous discernment. The adversary is an extremely intelligent and crafty evil supernatural being that is ruling this realm; he has put its systems in place and has indoctrinated many to believe in either the wrong god or no god at all. Obviously, you are failing and will be reincarnated back here after the coming Golden Age.

@Chucky ... how did our existence or life itself come about if not by creation? Believing in macro-evolution is the equivalent of believing in the statistical likelihood of a loaf of bread gradually developing on its own if all ingredients are present for a long enough period of time!

BTW what does your statement have to do with advancing as a nation? If I remember correctly this nation was much better off when people practiced the beliefs of the "supreme being". People had more character and we had stronger communities!!

I was seriously concerned this Lady was “past her due date” by virtue of her many rambling opinion pieces published over the past few years, but this piece was very much both on point and well articulated ... well done and sincere apologies for prematurely writing you off, as you have now demonstrated that you still have much to contribute ... indeed, stick on this topic, as it is turning into one of the greatest tragedies since the extermination of the Lucayans.

Not past her due date at all. An excellent article, quite on point. If anything, overly respectful, by omission, of the ineptitude of the thing we loosely call our Government.

I doubt if the true story of devastation of hurricane Dorian on the islands of Grand Bahama and Abaco will never be told. The inept response by the government was noted by the international media. There was just a failure by government agencies in their response to this tragedy.

The Americans and the British were on the ground in Abaco before our own RBDF forces. They provided a lot of assistance in the early days after Dorian.

Somebody said on social media, how the Jamaican Defence Offices came and cleared the debris from the airport. The person said what made them so upset was that RBDF officers just stood around and watch. Also the British marines who came ashore wanted to do search and recover missions. Since they did not get approval, they did not do it.

Also a former law enforcement officer from the US was quite surprised when he went to a check point at the Treasure Cay Airport. The police he went there, were cocktailing.

Bahamians who reside here on New Providence are blissfully unaware and ignorant of what happened and is happening on Abaco .All they are getting is photo-ops,and deflections ,That is why so many Abaconians are genuinely upset at the government's upset.

"Nearby, a new shanty town is growing, this time with solid concrete block homes and modern metal roofs. No one seems to know what to do about what they call “the problem", meaning poor people of diverse backgrounds, including Haitian, essential to the work force, but now homeless after Dorian swept out to sea the former shanty towns where they lived and where their micro-businesses flourished."

Very politically correct isn't she! What we need is a policy of no tolerance of illegality or criminality on that island!

Sad reality of what was a booming island, just over a year ago