No Repeat For Large Police Funeral 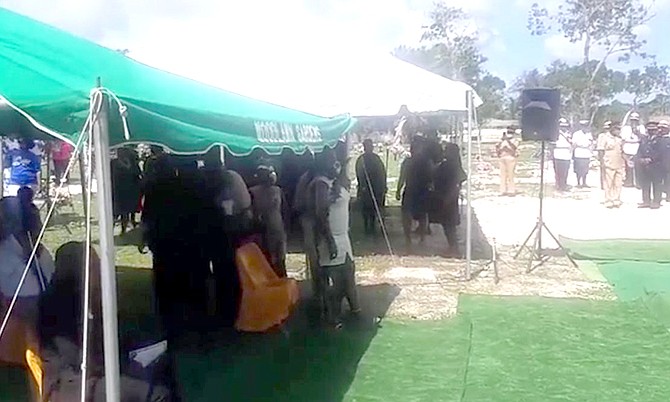 The service was live streamed on the Royal Bahamas Police Force’s Facebook page.

FOLLOWING criticism over a recent police funeral that contravened COVID-19 orders, Police Commissioner Paul Rolle said yesterday the public can be assured that such incidents will not happen again as everyone must abide by the law.

His comments come nearly a week after a police officer’s funeral was held at Woodlawn Gardens, which saw more than 10 people gathered at the site despite the COVID-19 Emergency Power Order stipulations.

The service, which was live streamed on the Royal Bahamas Police Force’s Facebook page, sparked criticism from the public, who accused officers of being hypocritical by enforcing orders that they themselves were not following.

When asked about the issue yesterday, Commissioner Rolle admitted that the event had exceeded the amount limit, insisting that officials will do their best to ensure that it does not happen again.

However, the police chief acknowledged that officers sometimes struggle on how to deal with the funerals with large crowds especially if the service is still ongoing.

“I think the matter as it relates to the funeral at the cemetery was addressed already,” he told reporters yesterday. “I don’t know if there’s much more that I can add to it other than to say it did happen and that’s about as much — I couldn’t say why the persons (were there) but there were three funerals that were going on side by side and, of course, when people see the police, they love the police and they came over.

“And naturally a lot of persons were there and so again, it is what it is and so we just have to make sure that as far as the police part of it that we don’t allow it to happen no more because we do have a few of our police colleagues who have passed and there are funerals.”

He continued: “We keep saying to the families what is permitted and it’s up to persons to abide but when you arrive at the cemetery and you meet a large crowd, I mean it’s, you’re in the ceremony. Do you stop and run the people out? That is the difficulty for us.

“We simply have to ask people to abide and not only in funerals but straight across the board.”

In March, Prime Minister Dr Hubert Minnis issued a number of restrictions on social gatherings, including weddings and funerals in an effort to stop the spread of COVID-19.

Under the initial order, only ten members of the immediate family could have attended a funeral service excluding the officiant and mortuary workers. This still applies to New Providence, where services can only be held by the graveside.

However, in certain Family Islands like San Salvador and Rum Cay, funerals can be held in churches or other religious facilities with up to 20 people once in accordance with the Bahamas Christian Council guidelines approved by the Ministry of Health.

Yesterday, the RBPF released a statement urging all concerned religious leaders, morticians and family members to comply with the orders.

"More than 10 people"???? They need to report the actual number of people there for the real story. This wasnt a mistake, this is hubris. There must be 50 people at least under the 1st tent. It's clear the rules aren't meant for the armed forces or the politicians

"there were three funerals that were going on side by side and, of course, when people see the police, they love the police and they came over."

The Commissioner has to be from Mars with all these explanations he's given recently. There are clearly 2 tents set up for this funeral. One tent is full. Aside from that there's a contingent of uniformed officers standing closely together who number more than 10 by themselves

I just really can't with this Buffon. We are really a corrupt backwards chain of islands

“I think the matter as it relates to the funeral at the cemetery was addressed already,” he told reporters yesterday. “I don’t know if there’s much more that I can add to it other than to say it did happen and that’s about as much — I couldn’t say why the persons (were there) but there were three funerals that were going on side by side and, of course, when people see the police, they love the police and they came over.

Does the Commissioner take us for fools? People love the police so they came over to see? When was the first time I went to a burial in a graveyard and saw another funeral with the police and said let me go over cause I love them so I need to see? You can't make this stupidity up from ignorant leaders. Clearly the police did not police themselves on this matter.

we all know that RBPF and RBDF are above the law and do not need to abide by any silly social distancing nonsuch.

There was another funeral on Nassau Street on Sept. 17 that had many in attendance. Senior officers were visible both inside the grave yard and outside. Obviously over the ten person limit.

Police Commissioner Paul Rolle is corrupt as one can get! He must be stripped of his duties and sent to prison immediately for the rest of his days!

The police should abide by the law. But there's a tricky thing here, as he stated with funerals In general, you have people violating the Covid-19 orders but, given the situation it's extremely difficult to break that up. From a human side, do you want to be the officers to tell everyone that some of you have to leave? Then if they don't comply, arrest them. People are at their lowest point emotionally, out of respect you'll let.it go, but at a later time remind people to adhere.

Breaking up a party or telling people not to congregate on a beach is much easier. I'm not condoning the violation of the orders. I'm simply saying there's the orders and there are situations that most people don't have the will to enforce on from a compassion standpoint.

You don't need launch an expensive long drawn out in years appeal to Privy Council to decide when, or if, the PopoulacesOrdinary at large POAL will be assured that the hypocrisy demonstrated much too quick jail judges sentences of the homeless, quick levying of harsh fines and hand down prison sentences to their fellow homeless and coconut water sellers citizens and also those jailed leaving their dwellings in search groceries, work, prescriptions, and to lend a helping hand family members will be receiving an apology and have their convictions speedily vacated and given financial compensated each of $100,000, by the PopoulacesPurse? Shakehead once for Yeah such discriminatory injustice wasn't the true intent constitution, Twice for Not?