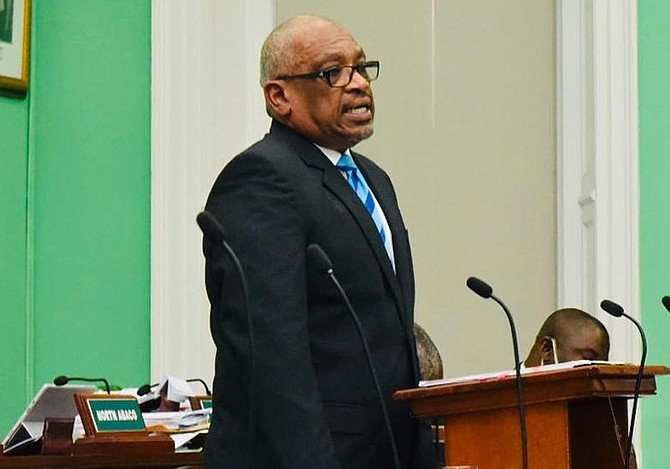 AS he declared The Bahamas appears to be nearing the end of the second COVID-19 wave, Prime Minister Dr Hubert Minnis said several relaxed measures will precede the expected end to the COVID-19 Emergency Powers Orders on October 31.

However, the day also saw 151 new cases of COVID-19 confirmed - along with two deaths from the virus.

Dr Minnis said that given global trends the country could easily face a third wave of the virus and urged all to wear masks, social distance and practice proper hygiene. He said specific, partial area lockdowns might be a tactic used in the future to curb COVID-19 spread, depending on the situation.

As he moved a resolution in Parliament to have emergency orders extended, Dr Minnis said commercial and social activities on several islands can now return to normal.

The 10pm to 5am curfew has been removed from these islands, except for Grand Bahama.

In New Providence and Abaco, the provisions under the current Emergency Powers Order will remain in place.

Beaches in the capital will remain open from 5am to noon, but in Abaco they will now open until 10pm daily.

Dr Minnis went on to defend his government’s COVID-19 strategy, hitting out at critics who have said they were not needed and were too harsh.

Among these has been attorney Wayne Munroe, QC; Elizabeth MP Dr Duane Sands and Pineridge MP Frederick McAlpine have in recent days also said they will not vote in support of an extension. The opposition Progressive Liberal Party has also said it will not support the extension of the state of emergency.

“There are people who oppose my government for various reasons,” Dr Minnis said. “That is their right. This is a democracy. However, it is unreasonable for any critic to say this is not an emergency and these powers are not necessary.

“That argument is simply wrong. One cannot say that we do not need certain emergency orders and at the same time say that the virus remains very serious. Saying both of these at the same time is wholly contradictory and makes no sense.

“Emergency Powers Orders give the government the necessary ability to act quickly to prevent or lessen viral spread. The provisions in the Emergency Powers Orders have been prescribed as narrowly as possible. No activity by citizens and residents is prohibited or constrained unless required for public health and safety purposes.

“Our health teams survey the circumstances, analyse the data and make recommendations to combat the virus based on the situation at hand. We take that advice and use the emergency powers orders to save lives. Without Emergency Powers Orders, the virus would run wild in our communities killing a large number of people in record time.

“This is how serious this crisis is. That is how infectious and deadly this virus is.”

The softened measures also mean weddings on all islands in the country may be held in a religious facility following protocols and Ministry of Health approved guidelines currently in place for church services, but for Abaco and New Providence, wedding receptions may be held outdoors only with physical distancing and mask wearing protocols.

On all other islands, wedding receptions may be held indoors and outdoors with physical distancing and mask wearing protocols.

Also, on all islands, including Abaco and New Providence, funerals may be held in a religious facility following protocols and Ministry of Health approved guidelines currently in place for church services.

Gyms are also permitted to open in all islands, subject to protocols and guidelines approved by the Ministry of Health. Facilities will be inspected periodically by health officials.

While the relaxation of measures is welcomed Dr Minnis again noted officials could revert to partial lockdown in portions of islands if cases again begin to rise.

He said when virus cases increase, officials try first to impose other restrictive measures but if cases rise exponentially and virus spread is out of control, there may be no choice but to order a specific area lock down to save lives as most governments have done around the world.

“But thankfully, based on the data at hand we appear to be nearing the end of our second wave of this pandemic.

“… Mr Speaker if each and every one of us would cooperate, stop the late social gathering, those are our challenges today, we would be able to come out of this viral infectious phenomenon very, very quickly.

“Let me be very clear, the second wave is not yet over. Additionally, given global trends we can likely face a third wave.”

doesn't look like this has anything to do with data, unless the data we're talking about includes the tourism numbers and govt revenue...

"Mr Speaker if each and every one of us would cooperate, stop the late social gathering,..."

As he speaks at a gathering of persons who were in contact with a positive case but refuse to quarantine.

The data is the direct relationship between the number of people tested and the amount of them testing positive ie low testing results in low positives and high testing results in high positives. Also, with the pcr test, if the sample is replicated enough everybody will test positive meaning that whatever they are testing for is already present in all of us.

dude, maybe take a break from that special koolaid?

Ignorant: Destitute of knowledge, either in general or with respect to a particular fact or subject; unknowing, uninformed, unlearned. I do not insult my body with artificial flavors and artificial colours, as they have unknown cumulative toxic effects. Nor do I insult my body with refined sugar which feeds and encourages systemic fungal growth which seems to lead some to jump to clouded conclusions.

Did anyone watch Ruling Redshirts rebel Reese dangling his carrot in the house while chirping "dangle dangle, dangle dangle" as he jerked it up and down? The silly season is truly upon us and as ma Comrade would say "can't make this stuff up, just can't, a nod of once for yeah, twice for no."

As more people get sick and die almost daily and the morgue is out of space and contact tracing can't keep up with actual cases, he decides things are getting better and allows more people to mix in closed spaces. This is not leadership but an act of attrition for political preservation at the cost of lives!

.. that under the cloud of a possible election, Minnis would rather make decisions that would placate people and encourage more deaths than find intelligent solutions to actually help curb the spread of the virus. Would you want to go to a gym with people huffing and puffing while wearing their masks improperly for instance?? Why make that possible?

Minnis has beyond a shadow of doubt greatly magnified the devastating impacts of both Dorian and Covid-19 on our country and its people.

The incompetency and stupidity of no other Bahamian has ever been responsible for so many deaths accompanied by so much economic turmoil.

yeah because it is a secret lab owned by Minnis and the New World Order that made the virus. maybe you should get a new tinfurl hat the one have aint working too good.

Not quite correct. The level-4 germ warfare lab in Communist China where Covid-19 was created was never owned and operated by Minnis, but rather by representatives of Minnis's friends in the Communist Chinese Party.

We're down this road because of the mistake made with the July 1st reopening. We basically won the fight against Covid-19 at that time. If we hadn't opened up in terms of foreign travel and tourism, we would probably be back to some semblance of normalcy. I don't understand that reopening decision given that all of the large hotel properties were closed. Also, tourists are not traveling in any significant numbers. So, from a cost benefit analysis perspective, he paid a very high price for little to no benefit.

He's announcing we're near the end despite the fact that the daily updates of cases isn't showing a downward trend. If the numbers are going down and the high numbers we're seeing is due to catching up on backlog results, then they should say do. Otherwise, it appears that they don't have a clue.

i will suggest that you have perhaps missed the point of the excercise. everyone is going to get the virus and many will die. we just didn't want it to happen with a major surge. the plan from the beginning was the "FLATTEN THE CURVE". well guess what the curve is flat. job done. carry on smartly. and keeping our borders closed and heads in the sand doesn't help the guy who hasn't had a paycheck in 6 months. have a heart for crying out loud to selfish syncophant

You'll quickly find out just how flat that curve is today if you get infected with the deadly Covid-19 virus and end up needing any kind of serious medical treatment in our completely overwhelmed and now totally dysfunctional public healthcare system. Suggest you stay a good distance away from others, always wear a mask and frequently wash your hands.

@DWW ... how is the curve flat if infection rates and deaths are at an all time high compared with 2 months ago? Can you plot a graph?

only economy was flattened on purpose

I fail to see any comparison. one is a doctor of vaginas, teh other wants to play doctor with vaginas. see the difference?

When will the FNM show loyalty to country and grt rid of this man? If ever there was justification for a no confidence vote... My lordy just throw him out already...

He has obviously driven @DWW 'mad in the head' like so many others. LOL

The problem with doc is he lies to, to much he is a born liar. He does not have the ability to think things through. no matter how simple it may be. He makes no sense. Every day and more and more it is clear what MS. Butler-Turner and the others saw in him

All comrades hope their sweet Jesus that they have been but imagining be living under a new breed authoritarian intentionally mixed-up messaging leadership - still what matters most is when a PopoulacesOrdinary at large POAL, begins to imagine seeing the worst in all the similarities they're left own be seeing in ways red coat injustice and in governance roughin' up of a done deeply stretched out in suffering POAL by way shifting toward being more authoritarian heavy-handed policies and directives originating directly out OPM almost on a day to day basis.
Shakehead once for Yeah shouldn't have expected anything less from a fightin' scared for their families very survival, and hang onto little dignity they have left** POAL, Twice for Not?