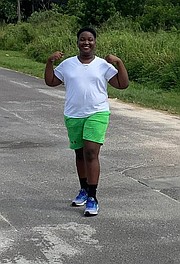 LIKE many teens and kids who were under stay at home orders since March due to the pandemic, 14-year-old Andrew Woodside Jr found himself overindulging on fast food and rarely getting involved in any physical activity.

Not the habits of an aspiring athlete and professional football star, Andrew who stands at 5ft 9in put down the chips, picked up some weights instead and began to take his health serious.

“I was always a big child. My family is big and tall. Although as I grew older, I started realizing that being big limits my movement in lots of ways and that I was not physically fit. I want to play professional football someday so I need to be able to move faster,” Andrew told Tribune Health.

The disruption in his habits has resulted in the Andrew dropping more than 12 pounds, moving more easily and the biggest effect of it all - putting a dent in childhood obesity.

Andrew had the help of Demetrius Clarke, a certified fitness instructor who launched a free kid's programme in July to help curb the high rate of obesity among young people.

According to the 2013 Global School Based Health Survey, six in ten children between the ages of 13-15 in The Bahamas were overweight or obese. The survey also revealed that 84 percent of children did not get enough exercise and only 16.6 percent usually ate fruits and vegetables five or more times a day.

Mr Clarke also wanted to demonstrate to kids that fitness can be fun. The programme took a holistic approach to a healthy living incorporating, nutrition, fitness and wellness.

Andrew Woodside Sr, said he came across Mr Clarke's programme one night as we were watching the evening news and decided to inquire more about the program.

“During the lockdown from school, my son blow up like a balloon. He put on weight from not going to school. And then you tell him to go exercise and he is not interested. We could not get him to do anything. So, I figured it had to be someone from the outside who would have to come in and get the message to through him."

Mr Woodside said his struggles is one that many parents go through getting their children active. He said outside help was the best route to take for him.

Mr Woodside said Andrew adjusted to the programme rather quickly and has benefitted in major ways.

Andrew started the programme at 235 pounds, way above his body mass index.

“My son is not only overweight but he's also very tall. He wears size 14 in shoes.

“But the doctor told him for his height and age he should only being weighing around 160 pounds.

Mr Woodside believes his son would have reached this goal had it not been for the lockdowns that disrupted the flow of the programme and opportunities for physical activity.

“Even during the lockdown, Mr Clarke would constantly call and check in on him to make sure that Andrew was still following the programme in terms of eating and exercising. I am so grateful for his help in this all.

“I am happy that Andrew lost weight - I am happier that my son’s mindset has changed. He gets up in the morning and exercises and does do also in the evening. This new mindset Andrew has taken with him to Coconut Creek High School in Fort Lauderdale US where he transferred in hopes of playing football."

He said he will keep up the practices initiated by Mr Clarke while there.

“The programme helped me to become more disciplined and focused. Mr Clarke was determined to help me succeed with weight loss. Even when we were locked down, he would call my daddy to find out if I was sticking with the programme. He would also speak to me and encouraged me to keep going. I am still motivated and even though I was only in the programme a short time I still do my exercise regimen daily and can still hear those encouraging words from Mr Clarke, “come on Andrew you can do it, keep going Andrew”.

“Putting the weight on is easy but taking it off is lots of work. However, if you persevere the outcome will be worth all the hard work,” he told Tribune Health.

The Ministry of Health, in partnership with the Ministry of Education, announced earlier in the year the launch of a pilot programme in an aid to encourage healthier eating habits among young people. The 100% SMART Fruits for Kids initiative will focus on the students and faculty members of Centreville Primary School where they will be provided fruit twice a week.