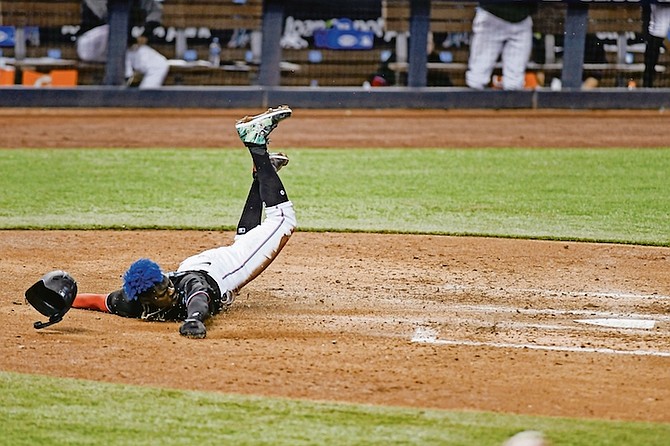 Miami Marlins’ Jasrado “Jazz” Chisholm scores on a sacrifice fly by Chad Wallach during the fourth inning against the Tampa Bay Rays on Saturday in Miami. (AP Photo/Gaston De Cardenas)

The 23-year-old middle infielder went 2-10 with two walks, one run, two stolen bases, and a .733 OBP through the three games as the Marlins went 1-2 against the Tampa Bay Rays over the weekend at LoanDepot Park in Miami, Florida.

After a 0-3 night in the Marlins’ 1-0 loss in game one Thursday night, Chisholm went 2-3 with a walk, a triple, and a run scored in Friday’s 6-4 loss. Chisholm’s triple sparked a two-out rally in the 7th inning and he went on to score the Marlins’ first run of the season when Corey Dickerson doubled.

In game three, Chisholm flashed his speed on the base path in the Marlins 12-7 win in the series finale Sunday night.

He opened the fourth inning with a walk and went on to steal both second and third base. After Chad Wallach hit a shallow ball to right field, Chisholm scored on a sac fly.

Hearing the crowd is astonishing, I want to be a big leaguer every day of my life now...It was extremely special with my family being there, my grandmas, my mom, my sister, everyone that came here to see me the first night that fans were able to see me,” Chisholm told Bally Sports prior to the series finale, “I just feel like it’s just so me, that’s why everything about baseball. That you could be yourself on the field and you can play as yourself and do whatever you want as yourself. I just feel like that’s how the Miami Marlins are built like. I don’t think there’s another team in baseball with swag like the Miami Marlins. I can tell you that.”

Chisholm sat for the first time this season last night as the Marlins opened a three game set on the road against the St. Louis Cardinals.

“I think we are seeing the gear now and adrenaline that you hope will kind of will settle into his normal level,” Marlins manager Don Mattingly told reporters, “I think he’s even above that right now. You know the juice that he’s feeling during games. He does play hard, and I’ve played with some guys that are base stealers and guys that are out there. They do take a pounding on their legs and their bodies, so it’ll be something we’ll watch and it’s part of our plans, honestly. ... We have other options that we can move guys around to give guys days off and make sure they’re rested and try to give them the best chance to stay healthy.”