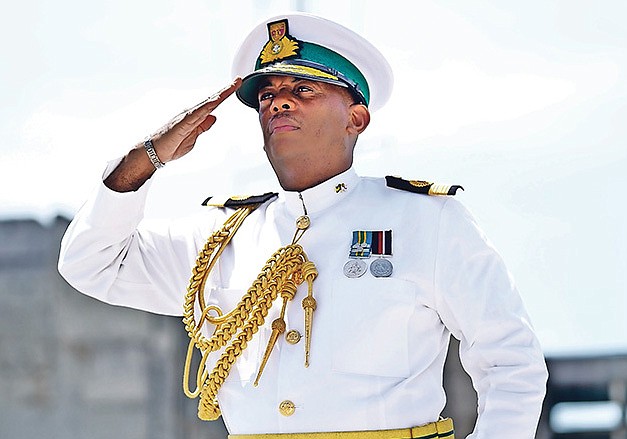 ROYAL Bahamas Defence Force Commodore Raymond King is still experiencing mild symptoms after being exposed to COVID-19, however test results have not yet come back to determine if he has the disease.

“Results aren’t back as yet. We’re waiting for those PCR results. At this time, we are still pending his result,” force medical officer, Lieutenant Commander Dr Derwin Johnson told The Tribune.

News of the Commodore’s exposure was revealed in a Cabinet Office statement on Sunday. The statement noted he was experiencing “mild symptoms” and that Deputy Commander Captain Shonedel Pinder will manage the affairs of the RBDF during Commodore King’s absence.

When asked if there was an improvement in the commodore’s condition, Dr Johnson replied: “Oh yes…. very mild symptoms and he is on some immune support like the vitamins and so forth and he’s just resting comfortably at home.”

Asked how many people on the force are quarantined due to exposure, Dr Johnson said more than 30, however he said they were not all connected to one incident.

“If you’re looking for a total of persons who are in quarantine at this moment, those persons would total about 35.”

Asked if he was able to say how many officers were in quarantine in relation to the RBDF commander and were in contact with the same person as Commodore King, Dr Johnson answered,“No, because we don’t know who that contact was.”

The Commodore was the first RBDF personnel to receive the Oxford-AstraZeneca COVID-19 vaccine in March.

The force medical officer previously reported 80 people were vaccinated at the RBDF base when it was an inoculation site.

Haitians are smarter than us. They refuse AZ and we wonder why they love this Bahamas. We take it then cover up our deaths and Covid rise. Haiti watching us playing up to EU political global Covid agenda as our people sucker under then stare at plant roots. Under the UBP The Bahamas was left bill free with billions in the bank. Under PLP5FNM brothers in crime every breathing Bahamian must place his hands in pocket and pay $37,000,500.00 or 15 billion dollars to pay off our national dept. There must be a new way DNA.

Only the DNA demanded gov/Opp powers, to remove their knee from our necks after 386 days of curfew, they have ventured beyond for our loving sake then paid the price of arrest. We owe them.

The UK is contradicting the use of AstraZeneca for ppl under 30s made in the UK. It's very deceiving that these companies are allowed to do mass experiments on different age groups. Our government is still allowing AstraZeneca to be rolled out in numbers for all ages because anything that is handed down to them, they accept without question and forced on the innocent. Jobs threats daily have vaccinated staff or leave. People tired of feeling he blunt of 2020-2021 job hunting to still come to a job that will require a vaccine as a form of employment. They know ppl need to survive, so they use the jobs and health system to push Bill Gates fantasies of global vaccination.