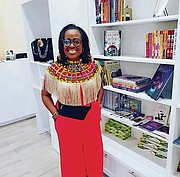 When Charo Morley and her husband Alex first opened their Afrocentric store Black Food, they knew that they wanted it to be more than just a retail space.

Instead, they have used the business as a launching pad to educate and share with the wider community.

“We always knew when we decided to open the store that it would be based on a socialist model, because we are socialists,” Charo told Tribune Woman.

“We didn’t just want a business where people came and purchased stuff from us and it was all about just them giving us money. We wanted to be able to give something back to the community as well. We wanted people to be able to come and shop as well as engage in programmes and activities that can benefit the wider community. Everything that we promote is from the Black perspective, whether it is from the continent or an African American or African Caribbean perspective.”

Last week marked the first time that the couple hosted a documentary viewing in the store.

“Before COVID, we used to move around the community, set up projectors and show Black films,” she explained.

“People really enjoyed them and it’s something that we want to continue.”

Last week, Charo and her husband were able to continue this tradition, albeit in a smaller COVID-19 safe, intimate evening event where they showed “Life and Death – Life and Debt”, a 2001 American documentary film directed by Stephanie Black. It examines the economic and social situation in Jamaica, and specifically how the International Monetary Fund and the World Bank’s structural adjustment policies have impacted the island.

Her husband Alex also gave a presentation on the “Destruction of the Black Crab Syndrome.”

“The phrase describes when crabs are in a pen and crawling over each other to get to the top and is also used to symbolise how some people treat you in your quest to move ahead,” he said.

“We are pulling each other down and fighting against each other.”

He said that when an oppressor wants to control an oppressed person, they often convince that individual that they are barbaric person or society. He pointed out that Black people have a rich, storied history that goes back thousands of years. He said when colonists first arrived in Africa, they met civilised, wealthy societies which they then attacked.

He said Bahamians often do not take that long history into account, instead they consider their history to begin with Majority Rule in 1967.

Black Food is a celebration of all things African. The brand collaborates with vendors and artisans in the Bahamas and throughout the African Diaspora to curate a unique collection of books, clothing and handcrafted jewellery sourced from Ghana, Kenya, Nigeria and the United States, Jamaica, and the Bahamas.

The name Black Food comes from their desire to feed the community with their history and to add to the enhancement and appreciation of the Black Diaspora experience.