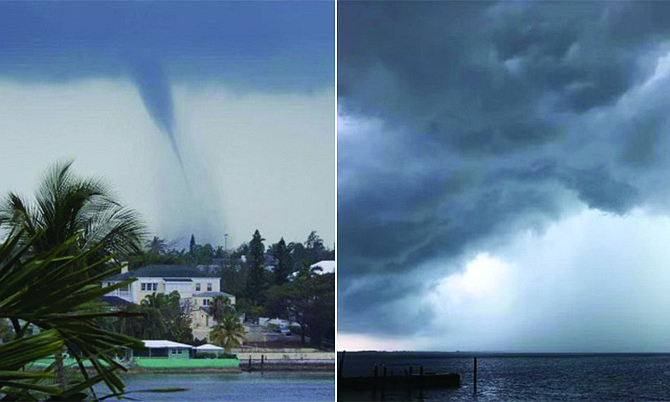 TORNADIC waterspouts were sighted across New Providence and other parts of The Bahamas yesterday.

Department of Meteorology duty forecaster Sonovia Sears confirmed sightings of the freaky weather and explained what caused it.

“We did have some waterspouts that occurred at various points around New Providence along with some Family Islands according to footage that we have seen,” she said.

“That was due to a frontal boundary that was across our area that is sluggishly making its way southward of New Providence. That is what was actually giving that weather in combination with some level moisture. That is what gave rise to what we had.

Ms Sears said forecasters expected the weather to continue throughout last night and possibly into today as that frontal boundary makes its way across the area.

Footage of one waterspout was caught on cell phone video and circulated on social media yesterday. In the video, a man is heard exclaiming about a “tornado in South Beach”.

There have been many unscheduled power outages in New Providence and the Family Islands in recent times which Bahamas Power and Light has related to severe weather conditions and problems at the Blue Hills and Clifton Pier Power Stations.

He said: “BPL would like to advise that customers in eastern New Providence would have experienced brief outages in the Winton area due to a lightning strike.”

Shortly after this, electricity supplies in areas of western New Providence went out as well. BPL teams had not determined the cause of the outage when The Tribune inquired.

Mr Parker continued: “We have reports of an ongoing outage in the western area. A team is on site and as soon more information is available we will send an update.”

At press time, power in many of the affected areas had been restored.

waterspouts and one or two tornadoes. Water spouts above water and water spouts are tornadoes on land. looks like one is above land.

This type of activity was usually ‘normal’ for this time of year. Especially on the water. Sometimes boaters or fishermen would go out and encounter no less than 5 or 6 waterspouts before returning to land. The reduction in carbon emissions over the past year due to Corona restrictions has released the stranglehold on Mother Nature somewhat Even California and Northern parts of the US are experiencing heavy snow in April.

Turn off the lights.. light a candle...