We’Re On The Right Course: Dahl-Regis Addresses Concerns Over Easing Of Controls On ‘Vaccinated’ 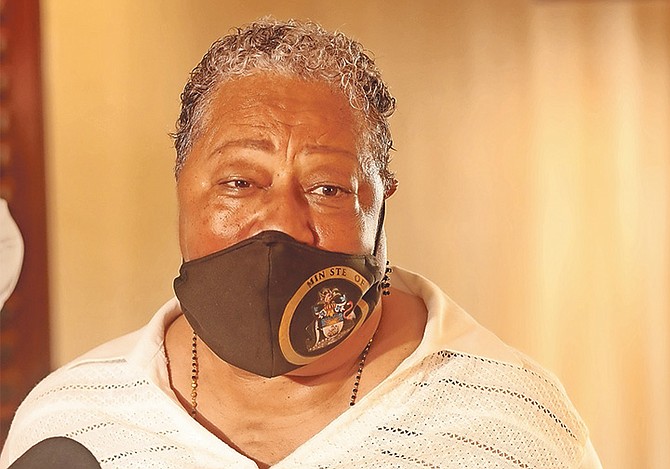 THE chairperson of the National COVID-19 Vaccine Consultative Committee has responded to health professionals’ concerns surrounding the removal of the PCR testing requirement for fully vaccinated travellers to The Bahamas, saying the government is relying on the latest science.

Last week, the president of the Bahamas Nurses Union said the group disagrees with the plans to remove the COVID-19 testing requirement for fully vaccinated travellers, believing there is no guarantee people won’t contract or spread the virus even after receiving two doses of the vaccine.

The Consultant Physicians Staff Association has also expressed concerns about the move.

When asked about health professionals’ worries, Dr Merceline Dahl-Regis, the committee’s chair, said while the research is ongoing, if fully vaccinated people do transmit the virus, it does not produce significant illness.

“So you have the situation where someone who’s been vaccinated and they would have a breakthrough, we call it a breakthrough (infection), so we look at the timing of that and it hasn’t occurred to the extent two weeks after you’ve been fully vaccinated, but we’re being guided. The story is still being written. The research is ongoing and there’s no final chapter with COVID.”

Effective on May 1, fully vaccinated people can travel to The Bahamas without a negative COVID-19 RT-PCR test, after a two-week immunity period.

Fully vaccinated travellers within the country will be exempt from the testing requirements when travelling to and from New Providence, Grand Bahama, Abaco, Exuma and Eleuthera.

Vaccinated people will also get other benefits, like participating in indoor dining.

Dr Dahl-Regis also responded to concerns some health professionals still have about the vaccine. She said the scientific output is being monitored every day, but highlighted some differences in the recommendation regarding second doses.

“Example, the manufacturer of AstraZeneca recommends that you can start your second dose as early as four weeks. The WHO says eight to 12 weeks and so yesterday there was a discussion and the reason the WHO suggested later because the research that they’re doing, their groups are doing, show that your ability to fight the infection, the amount of immunoglobulins you produce, increases longer the period of time and they felt because of that they would recommend eight to 12, but the manufacturer is now saying that even at four weeks out you still have significant protection. So the committee then has to make the discussion based on that.”

She spoke on the sidelines of a ceremony attended by Prime Minister Dr Hubert Minnis and US Chargé d’Affaires Usha E Pitts at Odyssey Aviation yesterday to send off the first doses of vaccines to the Family Islands.

While she could not give specific numbers, Dr Dahl-Regis said there has been a “steady uptick with appointment making” recently.

The committee’s deputy chair, Ed Fields added “basically every island” will be getting vaccinations this week. Only Abaco and Grand Bahama were not included in this round of shipments as he noted they have been taken care of recently.

To make an appointment to receive the COVID-19 vaccine visit vax.gov.bs. To view the full Family Island schedule, including vaccination site locations and times, visit opm.gov.bs.

With all due respect to the MOH, something seems amiss. Is it the newspaper headline? We are far from being on the right track with the current phase of the pandemic. Deaths are increasing, the number of beds occupied by Covid-19 patients is increasing as are the number of active cases. The number of active cases has more than doubled in the last month. Projections indicate that the numbers of new cases are not being constrained by current protocol enforcement. The narrative does not reflect our current reality which should be one of concern, not optimism; 23 people have died of Covid-19 this year. With an uptake of the vaccine of less than 30% we do not look like being on track to curb this outbreak by vaccination alone.

"........the government is relying on the latest science......if fully vaccinated people do transmit the virus, it does not produce significant illness."

"Now, the new guidelines, CDC guidelines. . .(say) that once you’re fully vaccinated, you are protected. Further to that, the transmissibility of the virus, they haven’t documented that it doesn’t occur, but it does not produce significant illness."

I've heard enough. Frankly I don't pay too much attention to this type of drivel from health officials who seem to be more loyal to the agendas of their political masters than the science.

Anyone know which way the deviously motivated unscientific political winds will be blowing a few days from now? What about a week from now? A month from now?

What is your problem? Seriously. What is your problem? Is there not one headline that you will cease and desist from making disparaging remarks about including the abuse of our Primary Minister? Please why don’t you ask for your own column so we can look forward to a daily dose of drivel. You are clearly either an entertainer par excellence or a major league A-H. I suspect it is the latter.

It's not about my problem. It's about our country's problem, i.e. Minnis. But I don't expect that to sink in for you. lol

How come the media is not reporting on the conch poisoning on New Providence? People are reporting getting sick after eating conch from different places. One who was in bed since Sunday says, ‘it is something you don’t want to experience.’ Says it felt like she was having stomach surgery.

Followed by a feeling of a volcano erupting through a 3/4” pipe.

Surely our senior health officials can find a vaccine-fix for this growing conch poisoning problem. Let's hope they do to avoid Minnis ordering either an end to all conch consumption or a total lockdown.

Don’t forget conch poisoning can also be related to a virus. And the corona virus can move from humans to other animals, cows goats pigs.. conch ? Is there a relation? Persons who got it said it’s the worst they ever experienced. Then there is that sewerage plant at Malcolm Park that handles the waste for Paradise Island. And the marinas are more active now dumping waste water, some untreated into the ocean. And the cruise ships ain’t reach yet.

Thanks to you & your team’s efforts Dr. Dahl-Regis.

Stay strong with your EvidenceBased methods, not emotionally charged statements

We are back at square minus zero. All that suffering 2020 into 2021 and we are no further ahead or in a worsening position. They might as well let us get on with our lives as medical dictatorship has ruined The Bahamas till eternity.

Vaccines have become a hard sell here in The Bahamas and in the US. So now they are attempting to reward or gift persons who take the vaccine. Will this be the third and final wave? Will Covid-19 start disappearing by June and mostly gone by summer?

“if fully vaccinated people do transmit the virus, it does not produce significant illness” “If fully vaccinated....” is speculative. “ It does not...” is a definitive statement. ”The story is still being written. The research is ongoing” Can you really speculate an “if” and then declare something that is still being researched and is ongoing? The studies are far from being over. There is no clear statement to be made on whether there is any significant illness! All I ask is honesty and this is what we get! “we’re being guided” might read...we are being told things that don’t make sense. No trust without honesty.

They are not on the right course.

They aŕe on an abirigene walkabout. They dint know where they going or when they will come back.

Israeli scientists develop two new drugs to combat COVID. Both drugs have high efficacy and one of them uses ingredients that have proven safe over decades. They keep people off ventilators and out of hospital.

The thing about the killings of young, Black men in the US by law enforcement agencies (if there’s any such thing) is even though these killings are not decreasing, the number of rouge police officers being charged and sent to jail I increasing. Time for this country to follow precedent. No killing should go un investigated. And if the authorities don’t don’t it, Bahamians must join forces and do their own investigations and force justice.