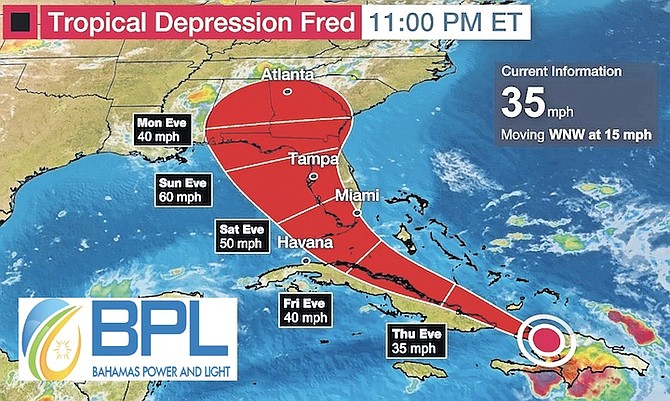 A TROPICAL storm watch remains in effect for the southern Bahamas after a weather system in the Atlantic developed into Tropical Storm Fred – before being downgraded to a tropical depression – with heavy rainfall and wind likely in those areas.

Some areas can expect one to three inches of rain with up to five inches of rain in isolated areas anticipated, which can cause flooding in low lying areas, officials said.

The areas under watch include the islands of Inagua, Mayaguana, Acklins, Crooked Island, Samana Cay, Long Cay and Ragged Island and the Turks and Caicos Islands.

The storm was churning toward the west-northwest at nearly 15 mph (24 km/h) yesterday evening.

According to the US National Hurricane Centre, on the forecast track, the storm’s centre of was expected to be over Hispaniola yesterday evening and move near the Turks and Caicos Islands and the southeastern Bahamas today before moving near or north of the northern coast of central Cuba tonight and Friday.

Officials said shelters were also placed on standby with teams at the ready in the event persons may need them.

The National Emergency Operations Centre, located at the National Emergency Management Agency’s Headquarters on Gladstone Road, was also scheduled to be partially activated at 6pm yesterday to provide support for the islands in the southeastern Bahamas overnight and into today and to monitor events.

Captain Stephen Russell, NEMA director, said NEMA officials have been in “constant dialogue” with counterparts at the Ministry of Disaster Preparedness, Management and Reconstruction, those on the ground in the islands of the southeastern Bahamas, and its regional partners at the Caribbean Disaster Emergency Management Agency’s (CDEMA) Coordinating Unit in Bridgetown, Barbados.

Chief Meteorologist Basil Dean said for the most part, the Central Bahamas seems not to be in the direct path of the storm.

“Fred is moving toward the west-northwest near 16mph and a general west-northwestward motion with a decrease in forward speed expected to continue for the next few days,” he said.

“On the forecast track, the centre of Fred is expected to be near or over Hispaniola this afternoon and evening, move near the Southeast Bahamas and the Turks and Caicos Islands as a tropical depression on Thursday and move north of the northern coast of Central Cuba on Friday.”

Earlier this week, there were two weather systems in the Atlantic, however only one advanced to tropical storm status. Mr Dean said he also noted a strong tropical wave that was just off the coast of Africa. He said that the system seems to be organised in terms of showers and thunderstorm activity.

He also reminded the public that it is almost the middle of August and statistically this is the peak of the hurricane season so an increase in the frequency of these systems near The Bahamas is expected.

Residents in the Southeast Bahamas and the Turks and Caicos Islands should continue to make preparations for the possibility of tropical storm conditions.