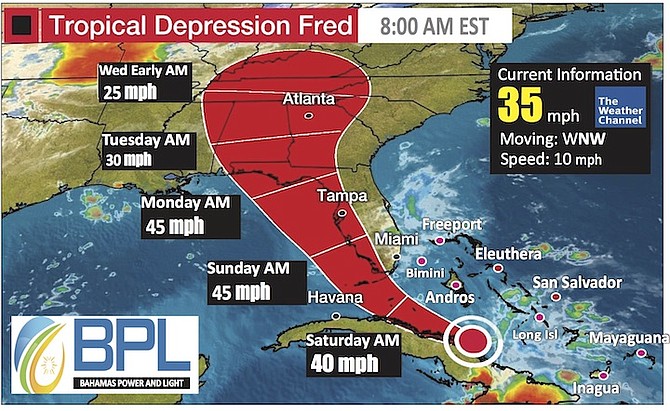 Fred continues to produce heavy rains across eastern Cuba and portions of the south-eastern Bahamas this morning.  However, despite the areas of heavy rain, the system remains poorly organized. Most of the deep convection is located to the east of the center and there is little evidence of banding features. The NOAA and Air Force Hurricane Hunters will be investigating Fred later this morning, and the data both planes collect, will determine Fred's intensity

After that time, a turn to the northwest and then the north is predicted as Fred moves around the western side of the ridge.

Based on this expected motion, the storm should track just north of eastern and central Cuba through tonight and the Florida Keys on Sat.

2 Tropical storm conditions are expected in the Florida Keys onSaturday, where a Tropical Storm Warning has been issued.

3 Watch out of Invest 95L which has 80% chance of becoming a named storm within the next 24-48hours. That one needs watching!!