Boys Deported Despite Order: Six-Year-Olds In Landmark Case Were Sent To Haiti And Now Stuck In Quake 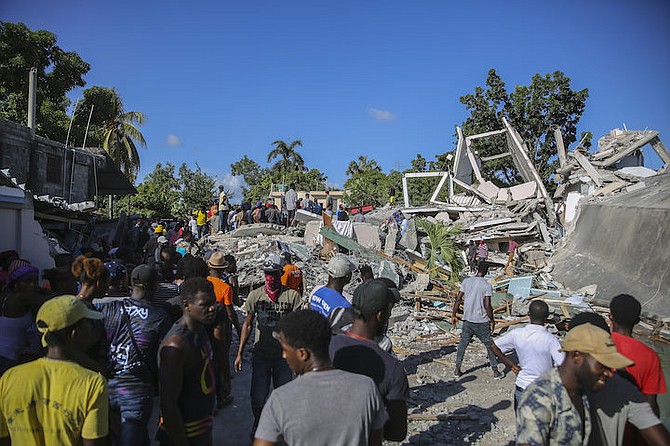 People search for survivors in a home destroyed by the earthquake in Les Cayes, Haiti, Saturday. The 7.2 magnitude earthquake struck Haiti on Saturday, with the epicenter about 125 kilometres (78 miles) west of the capital of Port-au-Prince, the US Geological Survey said. (AP Photo/Joseph Odelyn)

THE deadly earthquake in Haiti has attorney Wayne Munroe concerned about the well-being of two young boys in a landmark citizenship case who were deported to that island in defiance of a Supreme Court order and not returned to The Bahamas as requested.

Mr Munroe said he has not heard about the condition of Mayson and Nickey Pierre since the 7.2 magnitude earthquake hit Haiti last week, killing more than 1,300 people and injuring thousands.

The boys are about six years old and were deported to Haiti even after an immigration officer at Lynden Pindling International Airport was given an injunction order from Supreme Court Justice Cheryl Grant Thompson indicating they must not be deported.

Mr Munroe said the Bahamian government has since resisted bringing the boys back.

The children are among five applicants in a major case that saw courts decide that children born out of wedlock to Bahamian men are citizens at birth regardless of the nationality of their mother. Justice Ian Winder’s ruling on the matter was affirmed by the Court of Appeal in June. The Privy Council will hear the matter next.

“The problem is, from the time they went down to Haiti, when you had the assassination of President Moise (in July), I was somewhat concerned,” Mr Munroe said yesterday.

“At the time I had a contact who calls down there to the mother and that contact was able to reach her and she said they were fine and there was no concern. Then this earthquake happened.

“My concern is, where are these young boys? What is their condition? Wouldn’t it be amazing if the Bahamian government stranded Bahamians in Haiti and what would be worse is if they are injured or killed during these natural disasters.

“I don’t understand why is it that from the time the judge said these persons should not have been deported, why didn’t the government take steps to return them, if only to be seen as obeying the order of the court? It is a matter of concern because we watch the news and it’s up to 1,000 people now dead and they continue to find scores of people injured.”

Mr Munroe began representing the Pierres when they were in the Carmichael Road Detention Centre.

“These are boys who were born in The Bahamas and have a Bahamian father,” he said.

“We went to get an injunction to prevent them being deported while the case was being decided at the Supreme Court. We got an emergency order, served it at the airport but they still deported the boys. The order was served at the airport terminal but the person overseeing the exercise told the person to take the order to her office up town. One would think someone in that position would call the Office of the Attorney General and seek advice but that’s not what happened.”

An application to have the immigration officer held in contempt of court has already been filed.

“If these boys are dead, we look terribly bad to have deported them,” Mr Munroe said. “If they are injured or maimed we will no doubt be seeking judgement against The Bahamas government for that. No matter what, the case will continue.”

what is wrong with immigration in this country? inquisition is needed

There are only 11.5 million Haitians in Haiti. Why don't we just invite them all to come and live in The Bahamas? After all, there are no well-to-do Bahamian lawyers who need to concern themselves about the many Bahamian children living in misery in and going to bed hungry each night hungry in The Bahamas.

That will be a horrible idea Tribanon besides even if we invite 2 million haitians to come and live in the bahamas we are finished as a nation.

This would be a better news brief if the alleged Bahamian father were interviewed and made a n impassioned plea for his children.....just saying, Tribune. We all know Wayne's agenda with these stories.

Pierre. Bahamian. Father last name? What happen to Johnson, Rolle, Munroe, Smith. Sonething fishy with this. Did the bahamian father register the child as his own or is this for convenience. Why didn't the father get the children and keep them, why didn't he go to the CDC with the children birth certificate to prove he is the father of these 2 children. Shame on him. My children wasn't going through that. Fishy, fishy fishy.. prsy for their safety.

Like so many other Haitian nationals in our country, the father probably has umpteen other children and probably has great difficulty keeping track of their names.

It implies Bahamian Father, nothing Haitian about Bahamian, so Haitian fathers having a large number of children doesn't correlate to this article; and if he is Haitian, they are exactly where he should be also, Sell Outs!!!!

I completely agree, this whole thing seems so insidious, we should demand who the father is, and we are not talking about Naturalozed individuals, if we don't protect our inheritance, this utter garbage and assault against our identity will snuff us out if we sit idly by and permit it !

If he's so concerned he should have adopted them

There should be some DNA test going on for sure. Were they living with their father or their mother? If the mothers are illegals they have the right to be with their mothers if they are deported.

Don't worry. They're probably back in The Bahamas after taking the first sloop out of Haiti as soon as they landed.

Man you all sick, and the hurricane season has not started yet. Lawlessness breeds lawlessness. How can someone defy a supreme Court order?

The same way some so-called "Supreme Court Justice" and some Narsissitic lawyer can defy the interpretation of the constitution as anything but what it intended and clear says!!!!!!!!!!!!!!!!!