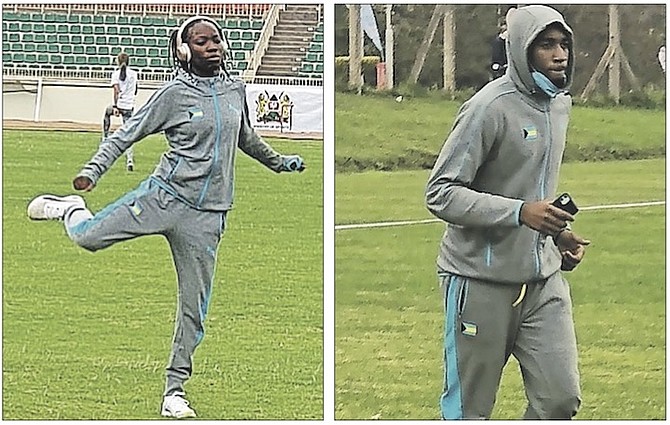 SPRINTER LACARTHEA COOPER, left, and javelin thrower Keshawn Strachan are scheduled to begin competition for Team Bahamas today as the World Athletics’ Under-20 Championships get started in Nairobi, Kenya.

Rutherford, coming off her double victory in the under-20 division of the North American, Central American and Caribbean Championships last month, will lead the charge for Team Bahamas in the first of five heats in lane six at 2:35am. She goes into the race with a personal best of 11.32 seconds.

And Cooper, who missed the opportunity to travel to the Olympic Games in Tokyo, Japan, because of COVID-19, will run out of lane five in the fourth heat at 2:59am with her PR of 11.71.

The first four finishers in each heat and the next four fastest losers will advance to the semi-finals. The final will be contested on Thursday.

“Being on this team is an accomplishment. Only the top athletes are here and if you are here, you are a strong athlete,” said Cooper, who will also contest the 200m with a PR of 24.09.

“My expectation is to run 23 seconds in the 200 and run my PR in the 100m. I just want to make my family and friends and the Bahamas proud by bringing back the gold.”

And Brown, who has moved up from the under-17 division, will be running out of lane three in the last of the heats with his PR of 10.57 at 4am.

The first three finishers in each heat and the next six fastest losers will advance to the semi-finals. The final will take place on Friday.

At 9:14pm, Strachan, the Bahamian junior national record holder at 72.13 metres, will compete in the qualifying round of the men’s javelin as the sixth of nine competitors in Group A.

The best qualifying standard of 73.00m or the 12 best performances will advance to the final on Friday. “It feels pretty great to represent the Bahamas at the World Junior Championships and to compete against some of the best in the world,” he said.

“For me, it’s a major accomplishment and my goal is to leave the championships with a new personal best. I plan to give this competition everything I got.”

The Bahamas will be represented by a nine-member team in the championships that will continue through Sunday. The other members of the team are Alexis Tilford-Rutherford in the women’s long jump, Rhema Otabor in the women’s javelin, Lamont Moss in the 200m and Antoine Andrews in the 110m hurdles.

“All I am doing is putting in the last few days of practice, trying to get as comfortable and relaxed as possible,” said Otabor, who will be in a straight final on Thursday at 2:40pm.

“I’m just talking about a few hiccups in my technique with my coach (Corrington Maycock) to see how best we can fix it in time for the competition.”

Otabor said Nairobi is very nice, a little colder than anticipated, but the people are very hospitable. And she’s looking forward to seeing her team-mates compete before she gets on the field to do her stuff.

The team will be co-managed by Laketah Charlton and Sharon Gardiner and coached by Bernard Rolle, assisted by Darron Lightbourne and Corrington Maycock.