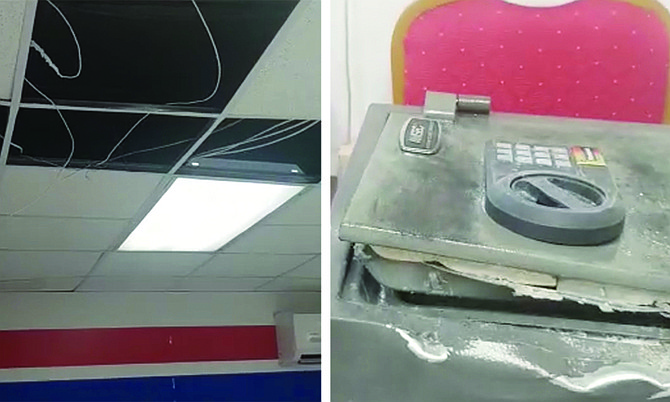 As party supporters fan out around the country on Nomination Day, FNM Chairman Carl Culmer said they will not be deterred because burglars cut through the roof of their headquarters on Mackey Street and sullied the building.

A small safe was forced open and some cash stolen.

Burglars tried to log into a computer in the office, though Mr Culmer said no data was compromised.

"It's hard to say what the motive was," he told The Tribune. "But this is the first time since I've been around here that something like this has happened."

In a press statement released after his interview with The Tribune, Mr Culmer called on political parties to rebuke such acts.

“This morning it was discovered that the FNM headquarters was broken into at some point last night. We don’t have any details at the moment but are hopeful that an investigation will bring answers and justice will be served,” Mr Culmer’s statement noted.

“It doesn’t seem coincidental that our party’s headquarters would be broken into on the evening before Nomination Day, but regardless of intent, it is a shame that someone would do this after the years of peaceful elections that our country is proud of.

“We encourage all political parties in The Bahamas to rebuke this type of behaviour as it has no place in our electoral process. The FNM will provide more information when it becomes available.”

More on this story later.

Looks like an inside job to cast blame on the opponent. Why is there NO mention of a Police investigation?

What is usually the outcome of a police investigation anyway?🤣😆🤢

Friday at 3pm and STILL no transfer of unemployment benefits?? Nearly time to ‘verify’ again but no payment received?? Government pay day = we’re all rejoicing?? SELFISH.

No food for days = WE intend to starve you?? Kindness from the ‘ambassadors of tourism’?? FRAUDS.

STALKING HER. HARASSING HER. BELITTLING HER. STARVING HER.

More likely than not. the FNM's break into their own headquarters to gain attention.

Try again Mr: Culmer this one will not work.