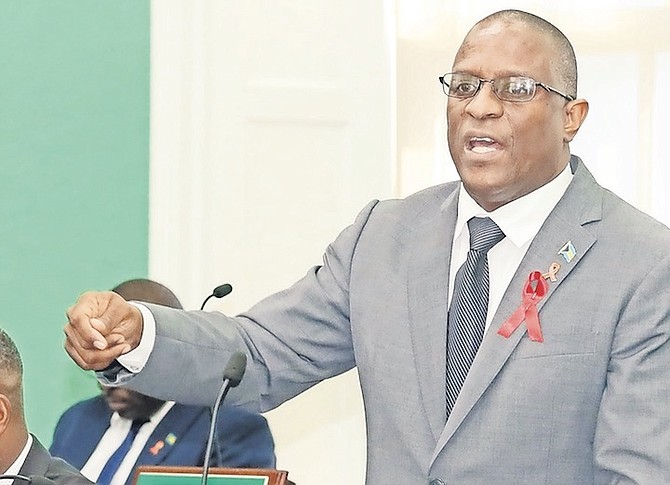 MARCO City MP Michael Pintard was adamant yesterday that the Official Opposition would not be spoken to like children amid a lengthy back and forth with government members of Parliament.

The exchange began when Elizabeth MP JoBeth Coleby-Davis voiced support for House Speaker Patricia Deveaux who came under scrutiny for her tone in addressing opposition parliamentarians during Monday’s sitting.

The events of that sitting spilled over into yesterday’s meeting.

The MP continued, referring to issues that arose between former House Speaker Halson Moultrie and Englerston MP Glenys Hanna Martin in 2018 under the former Minnis administration.

“I did not see the fight (then) that I saw against you and so I give you my support and stand with you,” she said.

This led the Marco City MP to stand, insisting Mrs Coleby-Davis’ remarks injected a “gender-based” position by members opposite.

This was fiercely rejected by the Elizabeth MP.

Again, Mr Pintard stood insisting it was not an issue of gender. “There are no misogynists on this side. There are no chauvinists on this side and I don’t believe in this House or that members opposite are misogynists. So, any subtle attempt by the other side to inject that the exchange between Madam Speaker and any member on this side has nothing to do with gender. It has to do with a basic appeal for no bias against us, the appropriate tone to be used when speaking to us and that is all we desire.”

Chiming in, West Grand Bahama and Bimini MP Obie Wilchcombe noted there had been no attempt to protect Englerston MP Glenys Hanna Martin from what was described yesterday as former Speaker Moutltrie’s “egregious conduct”.

Still Mr Pintard maintained that while he disagreed with certain actions by the former Speaker “none of them rose to the level that he was prepared to vote against the Speaker” in a vote of no confidence in early 2018.

For her part, Mrs Hanna Martin pinpointed what she called “hypocrisy and disingenuous” positioning on the matter.

She said: “I think while you didn’t see something rise to the occasion, the nation did. You were late in finding that out, but all of a sudden now you take some righteous positioning on positions taken by the Speaker and the only point being made is there appears to be a level of hypocrisy and disingenuous positioning on the matter...”

The opposition leader suggested that former Speaker had engaged with Mrs Hanna Martin the way he did as she had been the most vigorous defender of the former Christie administration.

The Englerston MP said the governing side was only requesting that the same patience shown to Mr Moultrie back then be shown to Speaker Deveaux.

This triggered much heckling from seated majority MPs and a call from the leader of government business for Mrs Coleby-Davis to resume her budget contribution.

How to tell if political romances were never real and everything else like this and that... I'd say right about the time of the honeymoon destinations pictorial brochures are being chucked into the Mackey Street dumpster after the Groom, doesn't much like way 'em's was spoken at. Youse just can't make up these two, ― Yes?

Another shining example of what is considered “good governance “ and high on the list of many issues to be debated for the benefit of the people-Yes?

Hate to say it, but these female MPs are shallow in debating the issues of the Budget

Poor Mr Pintard he did not even know that doc wanted to increase the Pay of members of parliament.

He is only keeping the leader seat warm. They will do an Ingraham-Turnquest on him very soon.