THE NORTH American, Central American and Caribbean Age Group Championships trials was held over the weekend at the Thomas A Robinson Track and Field Stadium. Photos: Racardo Thomas/Tribune staff 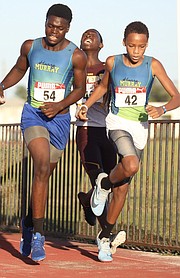 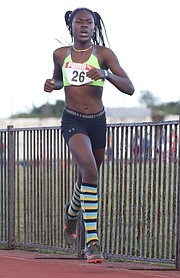 AFTER two gruelling days of intense competition, the Bahamas Association of Athletic Associations determined the eight-member team to represent the country at the North American, Central American and Caribbean Age Group Championships.

While the trials was held over the weekend at the Thomas A Robinson Track and Field Stadium, the team is scheduled to travel to Nicaragua to compete in the championships December 17-18.

Based on their performances, Kenny Moxey Jr and George Nottage will compete in the boys’ 13-14 division, Jamiah Nabbie and Phebe Thompson clinched their berths in the girls’ 13-14, Kamron Henfield and Jonathan Higgs have booked their tickets in the boys’ 11-12 and Keyezra Thomas and Keely Deveaux are listed in the girls’ 11-12.

Since getting started at age four, Moxey Jr said he’s been motivated by his father Kenny Moxey Sr, one of the country’s top multiple athlete and pole vaulter. But he said his goal is to niché his own name in track and field and he hopes to start with these championships.

“I really enjoyed it. I grew up with most of the competitors, so it was fun competing against them,” said Moxey Jr, a 10th grader at Queen’s College. “I’m also actually ecstatic. I’ve never been on a national team with George, so I think we will do very well.”

Nottage, a 13-year-old eighth grader at CH Reeves Secondary High School, thanked his coaches, including Varel Davis and Foster Dorsett of the T-Bird Flyers Track Club for preparing him to compete to the best of his ability.

“I think the competition was very good. I thought I would have missed my first race this morning (Saturday) because I got here late, but I reached in time,” Nottage said. “The competition was good. I just have to work on the 80m and the high jump.”

He noted that in teaming up with Moxey Jr, they should be able to push each other.

With her lanky 5-10 figure, Nabbie fell short in her first attempt at making the team in the 11-12 division, but she was more determined than ever to clinch a spot this year.

“I wished I could have done better in the 80m and the 1,200m, but it comes with practice. In the hurdles, I was a little timid, but I knew I could do well in the high jump and the long jump because I usually do well in these events.”

Thompson, a little more consistent in her events, was determined to make the team as a 10th grader at Bishop Michael Eldon High School in Grand Bahama. She did it by trading the lead with Nabbie during the competition.

“I feel great. I’m glad that I made the team. I just want to thank the Lord for bringing me safe so far,” Thompson said. “I ask that he continue to guide and protect me and that I have a bright future.”

As she prepares for her second appearance at the championships, Thompson said she would like to improve her performance as she works on her high jump, ball throw, hurdles and 1,000m run.

“I hope that we can build a bond, stick together and do our best,” said Thompson about competing alongside Nabbie.

“We hope to make our country proud of our achievement.”

“It feels good. I struggled a lot for the past five years, so I’m just happy that I finally made a national team,” said Henfield. “My knee started to hurt, but I still managed to pull through.”

The 11-year-old Temple Christian Academy sixth grader said once he can develop his form and his speed, he should be a contender for a medal at the championships.

As the runner-up, Higgs tried to keep pace with Henfield.

“It was hard, but at the end, I didn’t know that I won, but I came this far and I’m very pleased,” said an emotional Higgs, a 12-year-old eighth grader at HO Nash Junior High School, as he tried to hold back the tears of joy.

His emotions were worth it after his second place finish behind Henfield.

Combining with Henfield, Higgs said they form a formidable team and he’s looking forward to some impressive results at the championships, once he can improve on his foot speed and the strength in his arms.

Thomas, in winning the girls’ 11-12 division, performed exceptionally well in her five events.

“It went good. I came first in two events, but I think I did good overall,” said Thomas, who also hails from Grand Bahama where she attends Freeport Anglican High School.

“I didn’t have much practice in Freeport, so to come here in New Providence and did so well, I’m really proud of myself. If there’s anything I need to work on, it’s my ball throw and 800m.

“At first, when I started running the 800m, I was feeling bad because I don’t run that event,” said Deveuax, a sprinter from CH Reeves where she is in grade eight.

“Now that I’ve done it, I feel much better and I just want to work a little harder in it before I go to the championships.”

Having competed in the field events for the first time, the 12-year-old Deveaux thanked Flyers’ coaches Varel Davis and Foster Dorsett for getting her prepared. She said she’s eager to see how well she can compete against the international field when she travels with the national team.