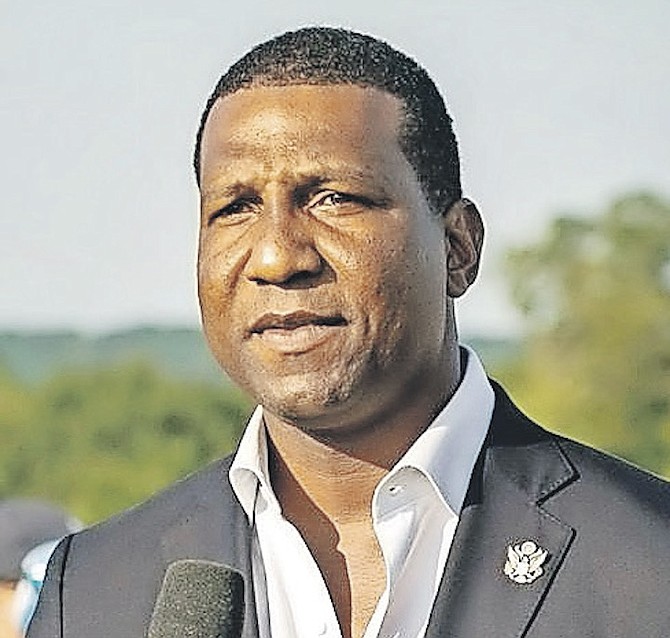 WHILE all eyes were on Tiger Woods at the Hero World Challenge at Albany last week, something else that was happening in the rarefied air of the sport was nearly overlooked.

A black man was being named president-elect of the USGA (United States Golf Association) for the first time in its 128-year history. That man is a Bahamian. His name is Fred Perpall. Commit that name to memory. Perpall is making headlines and the good news is he represents The Bahamas in a way that few, if any, ever have. The bad news is he had to leave The Bahamas to do it.

If ever there was a symbol of what the brain drain means to this country, Perpall is the poster child.

Perpall’s story is relevant, not because he rose from the depths of poverty – he did not. Not because he overcame physical challenges or any of those touching hurdles that would make you root for him and say if he can do it, so can I. In many ways, Perpall’s early life was ordinary. His mom ran a school cafeteria, his father was an avionics engineer. Naturally athletic, tall and gregarious, Perpall floated through high school, entered the then College of The Bahamas where he nearly flunked out thanks to too much time spent hanging out and too little studying until one day his dad sat him down and issued a stern warning – apply yourself or stop wasting the family’s money. It was the wake-up call he needed.

With the help of Lyford Cay Foundation scholarships throughout his college career, Perpall earned an associate’s degree in architecture from COB in 1993, followed by a bachelor’s and then a master’s degree in architecture in 1996 from the University of Texas at Arlington where he had played basketball and ran track. He stayed in Texas, eventually signing on with a company called the Beck Group. He had started college at 15, had a master’s by 22, and launched his career at 24 as a novice architect with a penchant for function and form in institutional design.

Fred Perpall with USGA executives on the golf course.

In the two plus decades since, he has worked on major projects including The University of Texas at Dallas Engineering building, a learning centre at Dallas Baptist University, Harim Group headquarters in Seoul, South Korea and in The Bahamas, at PMH, College of The Bahamas, Bay Roc Condominiums and Nassau International Airport. Meantime, he was steadily climbing the design-build ladder with vision and hard work that he equates to never getting comfortable with being average.

In 2013, the Bahamian who nearly threw away his chance at a higher education, was named CEO of the company he had joined 13 years earlier as a new graduate.

Today, as CEO and Managing Director, Perpall heads the international Beck Group with 600+ employees and annual revenue of more than $1 billion. And he is the incoming president of the USGA. And he is chairman of the Dallas Citizens Council. And he is a husband and father of two teenage daughters, and when D magazine published a story on advice from respected dads on being a good father, there was Perpall again. His advice: make your kids productive. Not happy, When they are productive, happiness will follow. That’s their job, not yours as a parent.

Fred Perpall, it seems, is everywhere these days, a Bahamian at home in the world at large.

In the world of architecture and construction, Perpall is a hard-working star, a Fellow of the AIA (American Institute of Architects) Large Firm Roundtable, the head of one of the most prominent firms in the huge design-build field in North America with offices throughout the US and Mexico, a firm EY ranked as a 2021 US Best Managed Company and next week he will be inducted formally as president of the USGA.

What Fred Perpall would have become had he come home after graduation instead of staying in Texas we will never know, but the fact that he rose to the heights in the heady worlds of business, design and sports, breaking barriers and achieving international success, is reason for pride. Sadly, it is also fodder for regret, that this man with so much talent and drive had to find his way outside his native country to reach his potential and make the difference he did.

When the good folks who decided Bahamians deserved the right to turn on red, they never accounted for the ingenuity that such freedom of navigational expression would unleash. If you have not seen it for yourself, let me see if I can explain it in a way that makes the experience real.

So, let’s say you are sitting at the traffic lights at Village Road and Shirley Street, heading north, calmly waiting for the signal to change to green. You are first in line to take off the second it changes. But three cars back, Joe who is already running late, wants to turn left. He thinks for a minute, revs the engine and goes for it, dashing around the other sitting ducks, appearing at your side window for a flash, circling the other cars, making the left on red except by the time he gears up to make this ingenuous and illegal move, the light has turned, miraculously, green and now you and he lock eyes as you start to take off while he is cutting in front and he does what Joe always does. He forces his car to make that newly minted legal left turn at any cost.

Bahamian ingenuity at its worst. Still, when Joe is home sulking because he lost his job having been fired for being late (anyway) one time too often, you do enjoy the freedom of left on red. It feels like you are getting away with something and then you remember, it’s all good. You were first in line and this law was made for you, baby.

True. We are suffering from decades of moving unqualified people to the top ranks of administration. Unqualified people have a vested interest in stifling ingenuity, talent and hard work. If they dont get there on merit they must shift the paradigm. They do it by amassing "things" and shift the mindset of the masses that possession of "things", no matter how you get them is the definition of success. Hence Sebas.

The party system in the FNM and the PLP is the main driver of this phenomenon. They appoint people based on who supports me. The my supporters mantra is so embedded in us one MP stood up on the floor a weeks ago complaining that he was denied the opportunity to hand contracts to his people. And nobody took note of it. This man just openly admitted to a corrupt practice on the floor of the house responsible for drafting laws of the country. He is why talent doesn't flourish