Prime Minister in isolation and his wife infected after family event 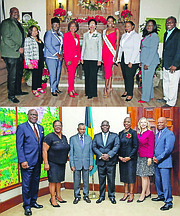 THE PRIME Minister and his wife at events this week - with Ann Marie Davis at an event at Balmoral Club on Tuesday, top, and Philip “Brave” Davis meeting the Press Club on Monday.

PRIME Minister Philip “Brave” Davis went into quarantine at around 11.30pm on Wednesday after he was exposed to COVID-19 from a close relative, but has so far maintained a negative status after multiple tests.

In a live broadcast from his place of isolation yesterday, the Cat Island, Rum Cay and San Salvador MP said his exposure to the virus happened at a “family gathering” where several relatives from abroad attended.

As a result, his wife Ann Marie tested positive for the virus along with several of those visiting. The visitors received their diagnosis on their fifth day after arrival in The Bahamas. Each of them is in isolation.

While he did not name the event, Mr Davis’ daughter recently got married. It is unclear whether her wedding is the family gathering in question.

As he made a case for the unvaccinated to get inoculated, Mr Davis revealed details of what led to his quarantine.

“Unfortunately, I can offer you an example from my own personal experience,” the Prime Minister said.

“Last weekend, we had a family gathering which included several family members who travelled here from abroad. Even though everyone was vaccinated and everyone tested negative before travel, several of those who were visiting from abroad tested positive on the fifth day after arrival in the country.

“Since then, my wife and other family members have tested positive. I remain negative.

“Because they were vaccinated, they are either asymptomatic or are experiencing only mild symptoms. I am so grateful that that is the case.”

Mr Davis said despite testing negative for the coronavirus, he would remain in isolation because it was the “responsible” thing to do.

“I wish I did not have to deliver this news before Christmas Eve. I told you earlier that members of my family have tested positive. I have taken multiple tests over the last few days, and all the results have been negative.

“I still need to do the responsible thing and self-isolate according to the rules. Being apart from your family is not easy – and it is especially difficult during Christmas-time.

For his part, Health and Wellness Minister Dr Michael Darville said Mr Davis and his relatives were all doing well.

He said: “A quick update on the Prime Minister. Yesterday, he was seen by a medical practitioner.

“He’s in good health and following the quarantine rules as well outlined by the Ministry of Health and I would like the Bahamian people to know that his family members and his loved ones are doing well in isolation and quarantine at various places.”

The news sparked questions regarding whether Cabinet members would also need to quarantine as Mr Davis attended a meeting on Tuesday.

Asked about this, Mr Darville said health officials did not think this was necessary.

“The Prime Minister was exposed by members of his family who subsequently became positive. Because the Prime Minister is not positive, the contact tracing focuses on the epicentre which is the family and those who had been associated with the family.

“The Prime Minister has had multiple tests and those tests are negative so as we stand right now there is no need to quarantine the Cabinet,” Dr Darville said.

Mrs Davis was also recently at a gift presentation to the Children’s Emergency Hostel as part of her work in the Office of the Spouse. She also attended the “A Night With Queens” event; and also attended a luncheon on Tuesday where she addressed mostly wives of parliamentarians, Cabinet ministers present, and friends, a press release from the government noted.

It is unclear whether people she came into contact with at any of these events tested positive for the virus or are in quarantine.

She was at multiple social events unmasked .

so the limit in crowd size comes after his event hmmm. i wonder how many persons were in attendance. inquiring minds want to know

Do as I say, not as I do. Elite politicians want us to follow Covid rules that they don't. Smt

The hope of lockdowns, restrictions, three boosters have all failed just in time for the FDA APPROVED covid pill. I wonder if it will do away with the Vax pass QRCODE that all vaccinated people are suddenly not vaccinated. There is a missing link somewhere. Question the mix up them saying the vaccinated are 100% vulnerable, yet give the 100% failing vaccine to kids in order to enter school. 🤔

The logic is lost. The lying is open for the world to see the bloody wound. There is no new Vax to fill the omicron gap. Had the head of WHO been a scientist and not an African armed fighter leader there would never have been a andemic world lockdown. His orders as head are ultimatum and no scientist or doctor can question him. No one knows who gives him orders og global magnitude he is too dumb to question. But he knows about arms and rebels.

The visitations need to stop. No sense in infecting people who don't have insurance. Charities, Centurian birthdays, holiday events, the risk makes no sense. They should stop sending the governor around to homes and events that aren't business as well.