Insight: Clumsy Words Which Could Cost The Government Dear 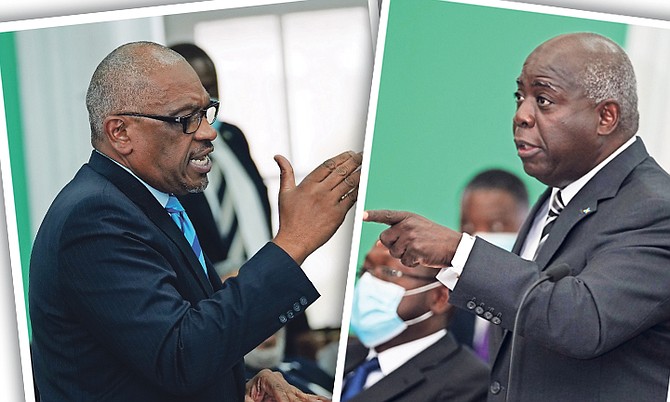 LAST week’s events in the House of Assembly may rank among the darkest of days of Bahamian political history. As a people, we have far too often entertained the level of buffoonery that goes on when the people’s business should be what’s being tended to. Nonetheless, as we have not made it clear to our Members of Parliament the code of conduct we would like to see adhered to, we continue to be subjected to the same type of antics.

To date, COVID-19 has snuffed out the lives of 2.2 million people globally, 175 of which, are Bahamians. Prime Minister Dr Hubert Minnis’ claims the PLP, namely, Opposition leader Philip Davis “wanted Bahamians to die” was an alarming assertion against the backdrop of such a tragedy.

“A government under the direction of the leader of the opposition would sit and watch a disaster. By opposing the emergency measures, the opposition was advancing a policy of chaos, sickness and death,” the Prime Minister said.

He added: “It is sad to see the position that party has taken in such a crisis.

“We are acting and making the tough decisions to save lives. Yet, they oppose us at every turn just trying to be popular. Their reckless and irresponsible positions are a danger to the country.”

For perhaps the most important person in government to stoop as low as the Prime Minister did was totally unwarranted and unbecoming of a leader. While this is not meant to serve as defence for Davis - whose reputation is damaged by being second in command in the former PLP administration - there are levels we should not want to sink to in politics. This particular occasion was certainly one of them.

As we watch, the US is taking on the gargantuan task of trying to put itself back together after being nearly completely torn apart by former US President Donald Trump.

Following the 2016 US election, a study by the American Psychology Association titled “Stress in America” revealed that 63 percent of Americans viewed thinking about their country’s future as a “significant source of stress”. Giving further credence to the trauma the former US President caused, 56 percent reported being stressed out by the political climate. Even more concerning, as we view parallels between The Bahamas and our northern neighbours, those numbers increased to 69 and 62 percent, respectively, when the same study was done in 2018.

And even though such tactics may have helped Trump to be successful politically, in terms of commanding a legion of cult supporters, it still turned out the majority of Americans preferred a different kind of leadership.

This is a teachable moment for Bahamian politicians. Albeit Dr Minnis is surely not on Trump’s level. However, his tone at times has a familiar ring to it.

While Trump’s penchant to dismember America seems genuinely reflective of his character, it is more probable the Prime Minister’s tendency to make wild claims about the PLP is his use of political gamesmanship.

But why play the game so dangerously? For power?

Power should not come at the price of our dignity. Rather, the responsibility of leadership should be given on merit alone. Likewise, the government’s record on COVID-19, and more comprehensively, how it governed the country, should be what is reflected upon when the final analysis is made – not fear-mongering with abusive language and hypothetical extremes about what the PLP “would have done” had they been in power.

We’re dealing with people’s lives, not merely votes on election day. When grown men behave like children in what is supposed to be an honourable place, whichever side of the political aisle you represent, Members of Parliament ought to take a step back and ask themselves if that is truly what they want to imbue as Bahamian leaders.

It is an absolute shame and the Bahamian people deserve better.

This, unfortunately, is not the first time the prime minister has drawn comparisons to Trump. Furthermore, I could hardly think of a modern-day leader in a democratic society who would be worse to associate with. Defamatory and divisive statements like those that were made in Parliament will not appeal to the majority of rational thinking Bahamians – FNM supporters or not.

There was a line crossed, and unless the Prime Minister tempers his reliance on hyperbolic statements, he too, will meet a similar fate. Just as President Trump has earned himself the title of “worst US President ever”, Minnis is being stroked with the same brush in the Bahamian context.

In a misstep-filled and calamity-laden government term - not necessarily of the government’s doing - upstaging the PLP after the resounding rejection from the Bahamian people four years ago was supposed to make a 2022 re-election easy. Yet, more and more, it seems like the Bahamian electorate are clamouring for the opportunity to give the axe to this government, unless the party changes its leadership first.

This is not meant to disparage the Prime Minister. That could not be further from what is at the heart of this discussion.

Rather, hopefully, leaders that are blessed with the opportunity to represent Bahamians in Parliament are reminded that they are to do so with decorum and change course.

This is not the way the Bahamian people want to be led and certainly not the example our future leaders should want to follow.

This analysis is silly and seems to only seek to serve as a populous review of the PM in the current bad position we are in. To say this is not a take down, but then allude to Trump and pretend to walk that back is wicked guise. Agree or disagree with the PM and his party, and stand by your words. This coy snide peekaboo opinion piece does not speak well the author's integrity. You criticize his albeit dramatic colorization of the opposition's political stances during the pandemic but then perform a similar rhetorical argument by evoking the zeitgeist of the Trump administration.

Get Davis in. Time for change!