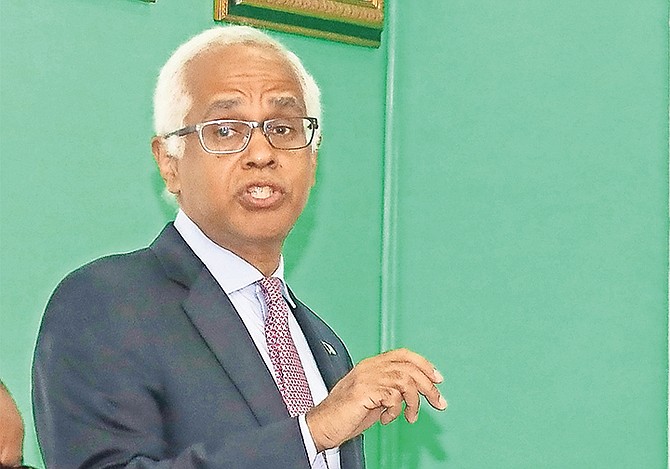 TOURISM and Aviation Minister Dionisio D’Aguilar said the government is “very close” to acquiring the Grand Bahama International Airport from the Hutchison Group.

The airport was badly damaged by Hurricane Dorian in 2019.

“The government through the Airport Authority is very close to acquiring this airport from Hutchinson and then will engage consultants on how to redevelop that airport,” Mr D’Aguilar said yesterday in the House of Assembly.

“As we all know, that Freeport airport has been destroyed by storm surge from the hurricane on numerous occasions and so any design of a new airport in Freeport must involve a plan to mitigate against such weather events.”

Mr D’Aguilar provided an update on several other airport projects, noting the government has secured funding from a local financial institution to proceed with a public private partnership while also using funds from the Inter-American Development Bank.

He said a proposed Exuma International Airport has been designed and officials are in the final stages of approving a contract for a Bahamian firm to build a new terminal on the existing airport site.

He said ground will be broken on the site within the next 90 days.

“We have engaged a best-in-class airport consulting firm that specialises in aviation PPPs (public private partnerships) to identify the best partner for management and operation of this Exuma International Airport project once it has been completed,” he said.

“Once the contract for the new terminal has been awarded, attention will be turned to the airside works, new runways and taxiways necessary to accommodate larger aircrafts and increased traffic.”

He said the government has engaged a local architect to design the new Long Island International Airport in Deadman’s Cay.

“The designs are finalised and we expect to break ground on this new airport by the end of the second quarter of 2021,” he said. “The project’s specifications include a new 25,000 square foot terminal and fire station and a new 6,500 feet runway since this airport is being designed to accommodate regional jets from North America so that for the first time Long Islanders can have regularly scheduled flights directly from North American and/or the Caribbean.”

On Great Harbour Cay in the Berry Islands, an airport currently under construction is “approximately 70 percent complete,” he said.

“The project involves a 9,500 square foot terminal building and 4,600 feet of new runway. The project is expected to be completed within the next six months and ready for occupancy shortly thereafter,” he added.

As for Marsh Harbour, Abaco, he noted the government committed $3m in repairs to the Leonard Thompson International Airport. This includes $1.5 million in post-Dorian construction repairs, 500k in air conditioning repairs, 300k in mould remediation work and 420k in replacement lighting, “all as a result of Hurricane Dorian.”

He said the Department of Aviation and the project implementation unit attached to the Ministry of Public Works are developing a project to rebuild the Treasury Cay Airport in Abaco “through the $1.7m facility available through the IDB.”

Regarding North Eleuthera, he said: “Funding has been secured through the IDB and the PPP for this huge project. The government intends to duplicate the Exuma design in North Eleuthera and construct an entire new runway to accommodate larger aircrafts and increased traffic.”

Freeport airport HAS NOT been destroyed by numerous hurricanes! Damn! How did this lie start?!?!

So pray tell what did it?

Once in Dorian. Not numerous times. But dorian wasn't a typical hurricane. And hopefully it was a once in a lifetime event. If not no island anywhere is safe from flooding..

They are building many airports. It is amazing how much they can lie with no shame,

It is said a true liar believes their own lies. example the Our Lucaya key will be turned over at the end of the year. Then the hotel will open in February. Mr Scott is no longer on the board. yes, he is on the board but he is not allowed to speak. the lies go on and on.

hutchison bought the airport for $1 give them $1 and tell them to move on!!!!

The Red Chinese clearly own Minnis lock, stock and barrel. And Minnis as the ever dutiful puppet of his Red Chinese puppeteers is only too happy to see the Bahamian people once again get royally shafted as they did when government purchased the failed Lucayan property from Hutchison Whampoa. LMAO

P.S. Notice how the constantly yapping white-haired poodle (D'Aguilar) says absolutely nothing about the outrageously high price government is proposing to pay Hutchison Whampoa for its ownership interest in the GB Airport. And of course most of us know Hutchison Whampoa is ultimately under the control of the very sinister and evil Communist Chinese Party led by Xi Jinping.