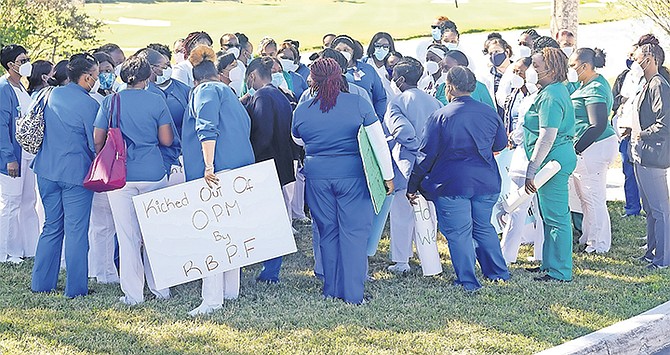 NURSES holding a protest outside the Office of the Prime Minister yesterday. Photos: Donovan McIntosh/Tribune Staff

AFTER protesting several times this week over overtime pay concerns, Bahamas Nurses Union President Amancha Williams said nurses were finally able to meet with Prime Minister Dr Hubert Minnis yesterday, who she says promised to ensure the payments are made even if it comes out of “his own salary”.

Nurses’ protests come as the country is preparing to receive COVID-19 vaccines and begin its vaccination process, with the essential workers needed to carry out the jabs.

Yesterday, Ms Williams told The Tribune that if the money is not paid as promised, it may negatively affect the vaccination process.

“He has directed a finance officer to pay the nurses in the Commonwealth of The Bahamas. Whatever he promised from July that would’ve been done must be done. It’s being orchestrated right now. (Today) we will confirm the date but me, my team and the rest of the nurses, we are hoping that that will be able to go through next week Thursday.

“I don’t want to say a timeframe soon but definitely we will know when that money is coming by (today).”

This comes after nurses in the Department of Public Health continued their protests at the Office of the Prime Minister (OPM) demanding to speak with Dr Minnis after he evaded the nurses as they demonstrated outside Parliament on Wednesday.

Workers in the department say they have not received overtime pay for time worked during Hurricane Dorian and now, during the COVID-19 pandemic. They are also claiming to be owed financial increments and honorary gifts promised to them during the pandemic.

Before the meetings with government officials yesterday, the BNU president told reporters that nurses will “do whatever it takes” to ensure that their cries do not fall on deaf ears and their concerns are addressed.

“We are going to stand together. If we shut down A and E (Accident and Emergency) today, what happens? Everything closes down in Nassau and the clinic closes. That’s why we tell the public, call on your representatives and tell them ‘whatever y’all doing, wherever y’all at, make sure the nurses get paid,’” she said as nurses gathered around her, standing in solidarity.

This is the third demonstration the nurses have held this week. They gathered in protest at the Ministry of Health on Monday and again on Wednesday in Rawson Square.

The group continued their demonstration at the OPM yesterday morning. They were later escorted off the property by police officers – forcing workers to protest outside the building’s entrance.

On the issues of pay and vaccines, Ms Williams told The Tribune: “It must be paid this pay period because they won’t have nobody to be campaigning no vaccine and … you won’t have no one to look to.

“That’s their specialty. To your understanding, vaccines and any immunisation falls under the community nurse so if you ask the PMH nurse (to do it ), they’ll say ‘yes, we know it, we can do the injections’ but then we have to familiarise yourself because we don’t deal with that aspect. That’s (the nurses at Department of Public Health) specialty.”

He told the House of Assembly that the Public Hospitals Authority nurses have received their overtime. However, he said, there is some overtime paperwork issue regarding some nurses in the Department of Public Health.

In an earlier interview with The Tribune, he said officials are in the process of paying those individuals.

However, yesterday, the BNU president criticised the minister’s remarks, saying the issue should’ve already been rectified.

She told reporters: “Like we said, we realise that the minister is playing with words to sympathise the public like he did some payments. If anyone knows that PMH is different from DPH. These are the Department of Health nurses. That’s totally different.

“So, what the minister is saying—we’re not saying that PMH nurses didn’t get pay. PMH nurses work in a hospital. They are under the (Public Hospitals) Authority. The authority has their bank and you know what happens with the authority but we’re saying that these nurses come underneath your umbrella – you and the public service and the Ministry of Health.

“So, why didn’t you make sure that your nurses get sorted out? We’re not talking about Ms (Catherine Weech at PHA). Ms Weech made sure her nurses and her operation was in progress. She made sure that she knows that she needs to pay the overtime and she speaks with her financial controllers and they make sure to let her know how to manage the hospitals properly so that they will have workers.

Looks like Minnis is now once again the real minister of health. The flailing political wings of poor Wells have yet again been clipped in a most harmful way. LOL

Nearly a year later and the ‘richest woman in the Bahamas’, who’s the everything of the odd masses, can’t get a response from the PM. But they can. How much are they mad about? One hundred thousand in total? NOT retirement money. Hundreds of millions of dollars or more given by wealthy benefactors has been known to help many many people (look at the good Mr. Gates has done in Africa - he’s not getting his hand dirty per se but his money has saved lives).

If rich bosses didn’t create companies & hired the masses, there would be no jobs generating income to buy health insurance (look at Haiti) and people would just be left to die (we don’t work for free, without money coming in that means no salaries for us). The ‘investor figure’ is being diminished to allow ego tripping to continue.

People who are clearly not skipping any meals and who are enjoying many benefits (paid health insurance) are getting their cake and eating it too - keep her around as a measuring tool but at the same time she ain’t nuttin’, we should come first because we got chirrin’. Those chirrin’ are so ‘well mannered aka well nurtured’, they’re in the streets having breakdowns often (it’s clear where they get it from) - yelling insults at a female stranger as if they resent her for not being moma (you don’t want us, we’d be an embarrassment to YOU, we don’t like the masculine gals we call moma - we want your dna).

Yes - they will come first. PM will ensure they get their money but he’ll ignore the woman who is their (secret) everything. Deranged but they make up the workforce.

Investors everywhere should be taking notes - this is how they REALLY feel about us.

Typical. How many times can we point to the PM allowing situations to deteriorate below rock bottom then sweeping in, putting his arms around everyone and saying it just een right how "theyre" treating "us", don't worry, I'll fix what I ordered those other guys not to do