Insight: The Dynamics Of Suicide 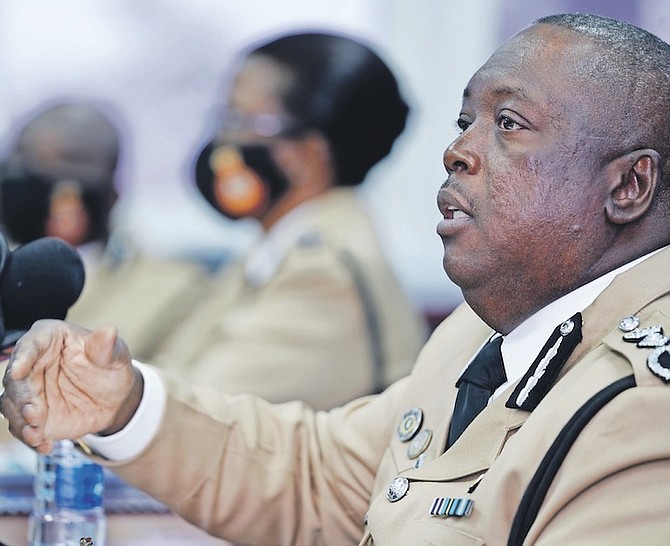 POLICE Commissioner Paul Rolle at the press conference at which the suicide figures for 2020 were announced.

During the past few months, The Bahamas has had an increase in suicides and suicidal attempts. According to Commissioner Paul Rolle, there were 11 suicides reported in 2020, a slight increase from the eight reported in 2019.

In 2020, ten of the victims were male and one was female. In 2019, five victims were male and three were female. On the contrary, more females attempted suicide than males. Males tend to be more successful at suicide attempts because they use more lethal methods. It is hard to pinpoint the causation of this phenomenon but we have to admit there may be some association with the COVID-19 pandemic and the accompanying restrictions.

An article published in The New York Times states that by December, 18 students in Nevada had committed suicide. One student left a note saying he had nothing to look forward to. As a result, the district has resolved to bring students back to school as quickly as possible.

A study from the Centers for Disease Control and Prevention showed adolescent mental health issues had risen during the pandemic. Under normal circumstances, suicides are unpredictable and impulsive. We have to be careful of the epidemiological fallacy of equating causation with association.

The fact is many of us have lost relatives, jobs, businesses and have felt the life-limiting aspects of the COVID-19 pandemic. Added to this is that many relatives have not been able to attend the funerals of loved ones and weddings have had to be curtailed. There has also been an increase in the incidence of domestic violence.

In spite of the spates of violent crime and homicides, our numbers are the lowest they have been for the past few years. But the reality is there is a powerful connection between homicide and suicide. When homicides decrease, suicides increase, unless preventative measures are taken.

We are challenged by the number of suicidal ideations (thoughts) and attempts of young people. This may come as a surprise to many people, but in our study on suicide, a survey was issued to Bahamians on all islands. Results indicated that one third (28 percent) of respondents admitted that they had thought of suicide at some point in their lives. At the time, this was surprising to us, but the recent events during the pandemic have validated this reality. Data for this study was compiled from the Situation Room at the Central Detective Unit, headed by then Superintendent Paul Rolle who is now the Commissioner of Police.

Self Hatred Aimed at ME

At birth, we all have three major instinctual needs: safety, love and empowerment. Because life is wounded, the existence of pandemics or other destructive factors in the society, lead to a depreciation of these instinctual needs. Thus, when we do not feel safe, we are open to experience abandonment, making us feel inadequate or not enough. When we experience rejection in love, we have feelings of being unlovable. When we are deprived of empowerment, we experience a sense of failure.

When these factors come together, they create a powerful, painful, inner feeling of shame (Self Hatred Aimed at ME). On our streets, the young people call this being dissed. When people who are shamed are further hurt, they experience murderous rage. This rage can be acted out against self, that is suicide (masochistic) or others, that is, homicide (sadistic). Thus, when stress occurs in the family or society, people consciously and unconsciously, experience deep frustration, anger, anxiety (panic) and a sense of hopelessness.

The sad thing is when hopelessness occurs in an individual and society, our children internalize it and often act it out. When the society is under pressure, like it is now, the inner frustrations and hopelessness are acted out in self-destructive ways. It is particularly important to note that when children feel hopelessness, they tend to introject the feeling and blame themselves, instead of other persons or the situation. They develop the erroneous belief that ‘if I’m out of the way, my family would be relieved and manage better without me’, because they see themselves as a burden.

This phenomenon has been further understood by the Adverse Childhood Experiences studies, which indicates that if a person experiences four or more incidences of abuse or trauma before the age of 18 years, it opens them to mental health issues such as depression, anxiety, suicide (the will to live), violence, substance abuse and the inability to cope. The individual with these adverse childhood experiences is also more prone to physiological illness such as high blood pressure, heart disease and diabetes.

A trauma study carried out on The Family Participants showed that 44 percent of the participants had significant adverse childhood experiences. With this in mind, our children exposed to the COVID-19 pandemic are traumatized, which will result in post-traumatic experiences such as self-injury, suicide (loss of the will to live), depression, hopelessness, fear of the future and lack of coping.

From our research we have explored the dynamics of a number of survivors of severe suicidal attempts. What was evident was that most of them had high incidences of some type of child relational trauma which eventually led them to feeling dissed or shame. The most common types of trauma experienced were child physical abuse (44 percent), sexual abuse (23 percent) and social deprivation. Once the person is shamed and they continue to be hurt or wounded, this triggers the development of self-destructiveness and murderous rage (Figure 1). Examples of these triggers included: the COVID-19 pandemic and its restrictions, economic failure (joblessness), failed relationships as well as grief and loss.

Our paper published in the Journal of Psychotherapy Integration, pinpointed six stages that lead to suicide and homicide.

I. Cognitive / Emotional Constriction – the person focuses on the hurt or trauma they received and is unable to move away from it. This narrowing of the life perspective destroys the will and the hope to live.

II. Physiological Arousal – blood pressure increases, pulse increases, the person is flooded with anxiety and depression, with a severe sense of hopelessness, loss of purpose and often panic. The IQ is lowered.

III. Psychological Numbing – the brain operates through the development of thoughts, which give rise to feelings which then give rise to behaviours. In this numbing down process, the person has the thought of the hurt or trauma, but their feelings are repressed and they can’t express them. This is called alexithymia (a – without, lex – words, thymia – hot feelings). As a result, they cannot say ‘I am deeply hurt’, ‘I am angry’, ‘I feel hopeless’, ‘I am going to kill myself’. This is often enhanced by alcohol and substance abuse.

IV. Negative Energy – the person can see no good or hope and interprets everything as negative or hopeless. The scripture hints at this when it says “do not let the sun set on your anger, in order not to give the evil one a foothold” (Ephesians 4:26-27). At this point, the person is bent on destruction at all costs. Persons at this stage who survived said that it was inconceivable that anyone could stop them in their self-destructiveness at this stage.

V. Value Fragmentation – this negative implosion destroys value and character formation so that the person loses all sense of the values that have been ingrained in them and influenced their life. This explains how some suicide victims are highly religious, practising Christians or have an evolved sense of spiritual well-being (ie through yoga, meditation and mindfulness). As this character fragmentation occurs, the person is on a hopeless, destructive course.

VI. Destructive Act – people who tend to be introverted, narcissistic or masochistic tend to be more prone to self-injury or suicide. On the other hand, people who are more extroverted or outgoing tend to project the hurt out and be more prone to hurting others or commit homicide (sadistic). Notice again the connection between suicide and homicides.

There are some special features of those who have survived serious suicidal attempts which we want to pinpoint:

We don’t understand these psycho-spiritual connections in the lives of Bahamians seeking to end their lives, but they are very real and need further studies to be understood. It must be stressed that some of these persons who survived were very strong men and women, with a good sense of self. Although suicide does occur in persons with severe psychiatric illness (psychosis, depression, personality disorders), persons in our program with suicidal attempts did not have a definitive psychiatric diagnosis like psychosis or severe depression. But they did have an intense desire that they could no longer face life. Upon further analysis, you would find there has been some powerful loss, sometimes a business, job, child, significant other or other relative.

We are shocked by the level of self-destructiveness through suicide, addiction and anger in our present society. A number of persons from our Family program, which ministered to 300 people a week, including those in prison and other marginalized areas, claimed they could not cope without meeting in the support groups and as a result, they have felt a deeper sense of hopelessness, despair and loss of the desire to live.

We are particularly concerned about the discontinuation of our Court-Ordered Adolescent Programme. Since the COVID-19 pandemic, some of the participants in this programme have been killed and others have attempted suicide. Again, we want to stress that in gangs, adolescents take risks in which they hope they will be killed. In other words, there is an aspect of gang involvement that is suicidal. However, this needs to be further studied because our outreach workers have warned that gang recruitment has increased by 1/3 since the COVID-19 pandemic.

In closing, we want to stress that The Bahamas, and the world at large, is facing a challenging time regarding mental health issues. At the heart of this is not personal inadequacy but the continuing epidemic of early childhood relational trauma (physical and sexual abuse) and the deep pain connected to it. Coupled with this is absent parenthood and children being allowed to drift and be involved in destructive influences. For example, we have had a number of cases of adolescent incest (sister & brother, cousins). We must remember that a hurt child is a dangerous adult, both to themselves as well as the society.

How dare The Tribune lecture us about suicide, after blaring every private act of suicide in big headlines, as if a major crime had occurred. How dare you. Just shut up, hypocrites. Or read that article aloud to your “reporters” and “editors” ... if you have any.