THE silly season might be stranger than usual because of COVID-19 restrictions – but things are starting to move on the political front. With his resignation last week from the Free National Movement, House Speaker Halson Moultrie may have catapulted himself into the political wilderness. He has seemingly committed himself to his convictions – even though the Bahamian people may not always be clear on what they are.

Others who have taken the same path have gone for independent candidacy for the time being – except for Golden Isles MP Vaughn Miller. But as we have seen from many that have come and gone through Parliament, when it suits their interests, pieces move all over the political chessboard.

However, the ratification of the 35 members of the FNM (18) and the PLP (17) shows both sides are readying their weapons for an intense battle to govern the country next. And with things characteristically quiet with the DNA, most believe the next election will be as it has historically been, another clash between the two oldest and largest political parties. 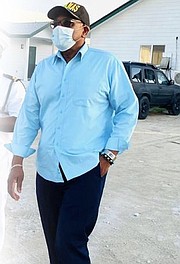 In an election season that looks a lot different than in previous years, due to the pandemic, the PLP has been hamstrung by the restrictions under the emergency powers. Unable to move about the country to galvanize its base and spread its campaign message, the PLP are running from the back of the race. Moreover, the Prime Minister still being able to travel through the Family Islands has had the benefit of strategically announcing major campaign initiatives such as plans to introduce a bill to legalise medical marijuana.

And for a party that has garnered the vitriol of a whopping majority of the Bahamian people in 2017, the PLP can’t afford not to use any weapon in its arsenal.

They have, however, at least got people fairly intrigued by naming their new slate of candidates – many of them political unknowns, in keeping with party leader Philip Davis’ promise for it to be a new PLP – Davis’ PLP.

But would this novelty be enough for the Bahamian people to entertain Davis’ efforts? This makes it quite interesting to make projections as we close in on the next election. While it helps to support the notion the PLP may be trying its best to rebrand and distance itself from the former administration, many Bahamians are unwilling to buy that decisions at the executive level will be more inclusive than before.

Who wins the election may boil down to damage control and which party we believe is most capable of the task ahead. What Davis has going for him is that while he was Deputy Prime Minister in one of the most mistrusted administrations we’ve had in recent history, he wasn’t the Prime Minister. And in leadership, the person in the number one position bears the responsibility at the end of the day. And unfortunately for the Prime Minister, while circumstances have made his job incredibly difficult, all fingers point to him when it boils down to it.

Alas, here’s the conundrum. Life has been tough for Bahamians. It has been downright depressing.

Loss of income, social liberty and what was considered to be normal life have all played a significant role in the way many Bahamians view the government and by extension, the FNM. These times and this government are associated with hardship – times the Bahamian people desperately want to distance themselves from. With the prospect of no rallies to allow both parties to present their platforms to the Bahamian people, what we have to go on is the feelings in the atmosphere.

Bahamians have a decision to make. Rather than choosing who we feel will be best for the country, we will again be examining who might be worse for the country. And when it comes to this criterion, both parties feel confident they have enough material to make a strong case against the other.

In 2017, there was a feeling of certainty that permeated the country on May 10. But with extremely trying times for the past year, and even longer for those affected by Hurricane Dorian, the FNM faces a tall order.

When a vote becomes a matter of vengeance, government’s come crashing down. Davis and company are quite familiar. So, too, were past administrations.

As long as the Bahamian people continue to vote based on how well we feel we’ve been treated, the FNM need to carefully navigate the treacherous terrain of campaign season.