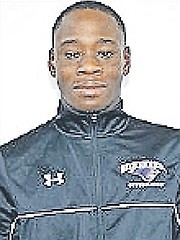 DAVANTE Carey achieved an NCAA Championships qualifying standard and was a part of a record-setting relay team for his McKendree Bearcats at the 2021 Great Lakes Valley Conference (GLVC) Men’s Swimming and Diving Championships.

In the 100 yard backstroke, Carey finished second with a time of 47.61 seconds which also qualified as an NCAA championships-B cut at last week’s meet in Elkhart, Indiana.

In the men’s 400 yard medley relay, Carey teamed with Henrik Dahrendorff, Gregg Lichinsky, and Xander Skinner to capture gold and set a new GLVC record in the process with a time of 3:10.74.

Carey was also a member of the 200 medley relay team along with Dahrendorff, Lichinsky and Caleb Law that finished fourth with a time of 1:27.71.

McKendree finished with a total of 1,120.50 points, fourth overall.Drury University claimed its fifth GLVC Men’s Swimming and Diving Championship in programme history with a conference record 1,652.5 points. The University of Indianapolis was second with 1,546.50 points and Lindenwood University placed third with 1,393 points.

In a COVID-19 shortened season that also featured several postponed meets, Carey made the most of his few opportunities this season.

At Indianapolis, Carey was again a top finisher in his signature event. He finished first in the 100 yard Back with a time of 51.39. He was also a member of the 200 yard medley relay team that finished first in 1:31.11.

Carey comes off a freshman season where he earned Academic All-GLVC accolades. He won silver at GLVC Championships and earned three All-American honours at the NCAA Championships.