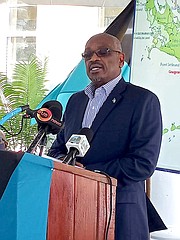 Dr Minnis said the event demonstrates the government’s commitment to the island as well as comprehensive development of the Family Islands as centres of opportunity and growth.

He also pledged Exuma will get a new international airport.

“I know that many of your critical needs have been ignored for too long. You have often not been treated fairly,” he said.

“We were determined to eliminate and reduce the many expenses associated with Family Island residents getting a new passport. You will no longer have to bear the costs of airline tickets, other transportation and in some instances, accommodations associated with travel to New Providence for first time applicants and for renewal of passports.

“We thought it very unfair that communities outside of Grand Bahama and Abaco still had to travel to Nassau to collect their passports.”

He said the passport system went live for a trial run on January 27 in Exuma and since then, without promotion or advertising, some 99 applicants have been enrolled. Fourteen applications have been completed and returned to Exuma on February 5. Four more were enroute Friday.

He said that by mid-March, a satellite Passport Office will open in Inagua, and shortly thereafter, offices will be opened on Long Island and Eleuthera.

He stated: “The Prime Minister says it often and I believe it (bears) repeating on this occasion, just because you live in a Family Island does not mean that you should be treated less than others who live in New Providence or in Grand Bahama. I’m an island boy from Abaco so I know of which I speak.”