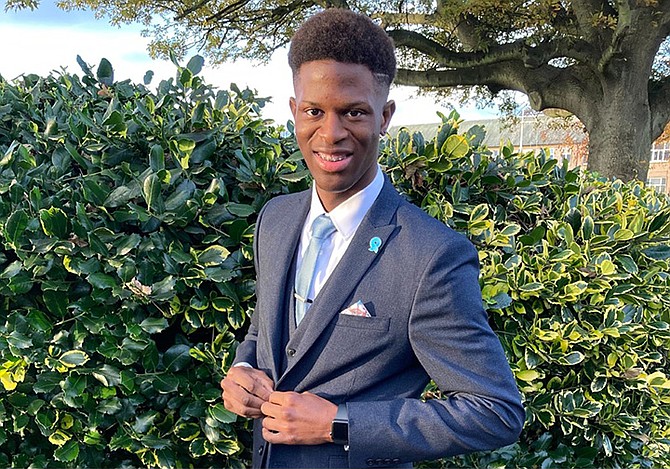 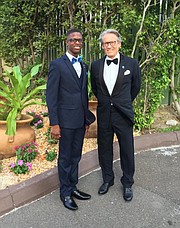 WHEN faced with the amount of adversity that Karajayah, affectionately called “Jayah” experienced in his life, one may have folded up, given up, or simply accepted the lot he had been handed in life. He could have chosen the mediocre route, just passing by doing whatever was required of him, allowing himself to stay stuck in a past that was so muddy it could have cemented his outlook on life forever.

But Jayah always had vision. He had a vision beyond his circumstances. No matter how tough they were, he continued to see the bright days ahead in his future.

When I say tough, 18-year-old Jayah was first stripped from the arms of his mother and separated from his six siblings at the tender age of four. He was sent to Nazareth Children’s Home where he spent two years before being reunited with his mother. However two years later, Jayah would face the same fate. He was sent back to Nazareth and then on to the Elizabeth Estates Children’s home.

He was born in Freeport, Grand Bahama where his mother and grandmother cared for him, but coming to New Providence had its share of challenges for his family. He spent many days crying at the children’s homes but he began to dream of a better life for himself and in this way, he could create a better way of life for his siblings as well, even though he is the youngest.

His passion for his family fuelled his dreams to be successful and get out of the home and become someone great.

Jayah had the kind of dreams that led to a twinkle in the eye and an attitude set apart from the rest. He knew that in order for him to get where he wanted to be, he had to live every day in the present.

Jayah and Grace, Head Boy and Girl, with their Deputies at St Leonard’s School.

Despite a difficult situation in the children’s home – and an even more difficult one when his father got all seven kids out of the home and tried to raise them alone – Jayah held on to his vision.

The abuse, injustice and degradation he faced caused him to look at the bigger picture. What is going on in this country to allow these things to happen to children? Why did his mother not have access to more assistance? How can children be better protected? How many more children out there are suffering? What can be done to help them? These kinds of questions loomed in his mind until the vision became clear - Jayah wants to become Prime Minister of the Commonwealth of The Bahamas. A lofty goal - but one he knows is achievable because he has read of many great world leaders who have risen above seemingly insurmountable odds.

Karajayah Forbes-Schlagenhauf has already achieved greatness. His most recent achievement is the biggest to date. Five months ago, Jayah enrolled in St Leonard’s boarding school in St Andrew’s, Scotland. Just recently, he got the news that led him to break down in tears, thinking of all he went through, and all he could be. Jayah has been chosen by peers and faculty as the Head Boy – the first black to achieve this feat in the school’s 144-year history.

A very proud school headmaster, Dr Michael Carslaw had a courtesy call Zoom meeting with Minister of Education, Jeffrey Lloyd, Jayah and his adopted father, Beat Schlagenhauf. Tears even ran down Minister Lloyd’s face as he expressed such joy and pride that a young Bahamian was the one to make history at the school so far away.

He officially congratulated him in the House of Assembly last week, accompanied by a giant photo of this amazing and astute young Bahamian.

“You have made history in a land far away from home, but you serve as an excellent ambassador of a very proud country and an inspiration to a large percentage of young people here at home,” Mr Lloyd told him in a letter.

St Leonard’s is an independent, co-educational boarding school. Accompanied by Head Girl Grace Adam and their team of deputies, Jayah will take on a number of important school responsibilities and act as an ambassador for the school. Dr Carslaw said he was delighted to have appointed Jayah from a “very strong field” of applicants and that he has been a “wonderful addition to the school”, hoping that he will inspire many of the younger students to “become global citizens in today’s ever-changing world”.

The school’s historic campus in the heart of St Andrew’s, a seaside town, was founded in 1877. St Leonard’s was named Scotland’s Independent School of the Year in 2019 by the Sunday Times Good School Guide.

Jayah was attending Windsor School in Albany when the opportunity arose for him to go to St Leonard’s. Mr Gerry Young came to the Bahamas as the founding headmaster of Windsor School. He was returning home to Scotland to a new school, and Jayah was interested to know more. Eventually, Beat decided to send Jayah to the boarding school, which became a history-making move.

“It has been an extremely interesting experience at St Leonard’s,” Jayah told me.

“I am currently a 12 year boarder following the International Baccalaureate Career-Related Programme (IBCP). Moving from the Bahamas to Scotland – sun to snow... experiencing Scottish culture, boarding, and being a part of a completely new educational programne in the midst of a global pandemic.

“I instantly felt at home because of the homely welcome I received on my first day. I could not help but realize how resilient, courageous and adaptive everyone was... staff and schoolmates alike. I knew right then that I was at the right place... a school that was viewed as home. St Leonard’s has over 37 nationalities and I am proud to be a Bahamian representative. I think I was chosen as Head Boy because I remained respectful and I made an impact on my schoolmates as well as the teaching staff.”

Prior to Windsor and St Leonard’s, Jayah first attended CW Sawyer, then Sandiland’s Primary, Yellow Elder, LW Young, Academia, Robert Land Military Academy in Canada, and Temple Christian High School. He is currently in grade 11 which is year 12 at St Leonard’s, and his final year will be year 13. Upon graduation, Jayah would like to attend University with his brother, Kaamanra Forbes-Schlagenhauf, who is currently attending Ecole Hoteliere Lausanne in Switzerland. He wants to study law and hospitality.

But his ultimate goal is to return home, form his own party and become Prime Minister.

“It’s about time the country had a leader of the people and for the people,” Jayah said. “The Bahamas is lacking young minds and it is time we, the younger generation, speak up and speak out for a better, stronger, brighter Bahamas.”

Jayah was fortunate to have been adopted by Beat Schlagenhauf. Beat had a long relationship with The Bahamas as an investment banker, with clients in Lyford Cay. But for 30 years, that was all he knew from visiting this country. When the financial landscape changed worldwide, many bankers had to change their mode of operation. Rather than being swept up in the changing tide, Beat opted for a simpler life, and he chose beautiful Bahamas.

When he moved here, he frequented the National Art Gallery as he is an art enthusiast. He asked then curator Amanda Coulson to show him the real Bahamas. She took him a short distance, right over the hill, to Hay Street.

There, he met community leader Valentino Scrooge Brown, and he also met Jayah’s father. He shared his plight of raising seven children whose mother had died. He said they were living in a place with no light and water, and very little furniture.

Beat took to the children and began to help them. Eventually, their father left for Turks and Caicos and they were on their own. Beat continued to assist them, eventually adopting the youngest two. He has since invested heavily in their education. He also supports several other Bahamian students educationally, and is a member of a number of charities in the Bahamas, raising funds for the arts and education. His dream is to open an exquisite resort on the island of Eleuthera – one that will earn five stars as a touristic destination, honouring the nature, culture, and, above all, the people of the island.

Jayah and Kaamanra intend to lend their support to the project when they have completed their studies.

“I’ve had a difficult journey so far in my 18 years,” Jayah said.

“The loss of my dear mother, Karen Yvette Russell-Forbes; being put into foster care... and then being adopted by an amazing human being and given a new path of possibilities I couldn’t have dreamt of in the darkest days.”

“I would like to thank God, my mom, my adopted dad, my biological dad..., my church family, Andrea Lockhart, Barbara Moss, Shalimar Johnson, Shaquille Sands, Melissa Williams Rodriguez, Sandena Neely, and Felicity Darville. I am especially grateful to Mr Young for the opportunity to attend St Leonard’s. I would also like to thank my grandmother, Josephine Russell, and my siblings, Karsten, Karsteeno, Kanraniah, Kistarra, Kanomera and Kaamanra.”

In 2018, Karajayah was selected as Youth Ambassador for the Bahamas to the United States. In 2019, he became faculty coordinator for Lend a Hand Bahamas. In October of the same year, he won the Youth in Leadership award from the Ministry of Youth and also earned the coveted Director’s Cup.

He represented the constituency of Englerston during Youth in Parliament in the House of Assembly. He also serves as Most Distinguished Youth Ambassador for the Kingdor National Parkinson’s Foundation. He is a devoted member of St Mary the Virgin Anglican Church, where he serves as an accolyte. His favourite quote is “lead the charge to put service above self at all times”.

He is indeed a fortunate lad! Well done Jayah!! Continue to excel..