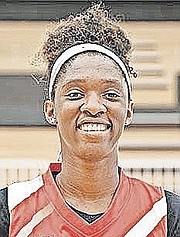 Higgs finished with 31 points and seven rebounds Sunday in a 79-75 win over Promete for Bembibre’s first two-game winning streak of the season. She scored nine in Thursday’s 68-65 win over Ensino.

Higgs shared the league’s weekly honour for the second time this season and lead’s the league with four weekly honours despite her team’s 6-17 record.

Through 24 games, Higgs is averaging a team leading 16.3 points and 4.6 rebounds per game in her rookie season of pro basketball.

“So it’s just a matter of progressing through that physicality and becoming more efficient,” she said to The Tribune earlier this season. “Through the season, it can be mentally and physically taxing. But you just have to take good care of your body and just continue to work hard, bring what you learn in practice into the games.”

Jones and UMMC Ekaterinburg continued their Russian Premier League dominance with a 91-61 win over MBA to improve to a league-leading 14-0 on the season.

Just over a month ago UMMC Ekaterinburg advanced to the FIBA EuroLeague Quarterfinals. They finished 6-0 in Group C and became the second club to clinch a spot in the Quarterfinals.

Through six EuroLeague games thus far, Jones is averaging 14.5 points and 7.5 rebounds per game. She is also shooting 74 percent from the field and a league leading 62 percent (8-13) on three point field goals.

The Quarterfinals will take place in March and will be played over two legs in single venue hubs. The winners will advance to the Final Four in April.