Stateside: The Gloves Are Off For An Embittered Ex-President And Those Who Turned Against Him 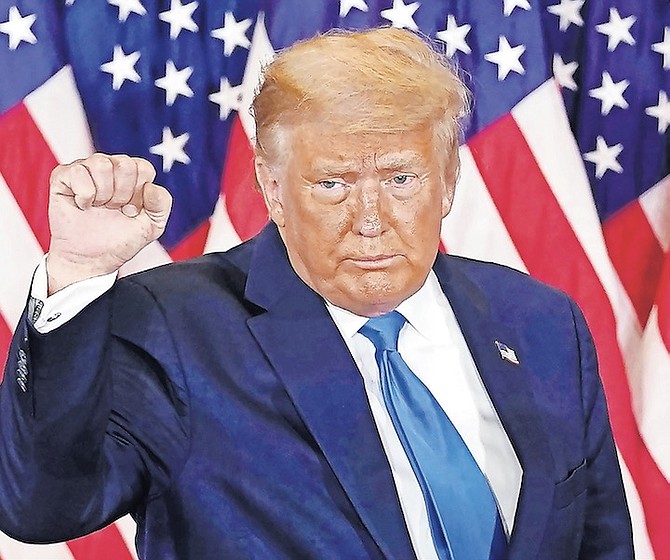 It’s just hard to resist the continuing saga of Donald Trump. A couple of things have happened in the past week that many foresaw but whose dramatic impact is nonetheless notable.

First, Senate Minority Leader Mitch McConnell has finally dropped the pretence of tolerating Trump. The Kentucky Republican, secure now that he has just been re-elected for another six-year term, is prepared for a bare-knuckle brawl with Trump.

Moments after the Senate voted to acquit Trump on Saturday, McConnell addressed the Senate and accused Trump of spreading “wild falsehoods” about a stolen election and creating a “manufactured atmosphere of looming catastrophe” that inspired the mob that attacked the US Capitol January 6.

McConnell continued his diatribe. “The leader of the free world cannot spend weeks thundering that shadowy forces are stealing our country and then feign surprise when people believe him and do reckless things,” he said.

The Kentuckian suggested, moreover, that he believed Trump was potentially liable both criminally and civilly for his incitement of the Capitol riot.

“We have a criminal justice system in this country. We have civil litigation. And former Presidents are not immune from being held accountable by either one.”

Even without his traditional Twitter megaphone, Trump surprised no one in promptly raging back, now via a political action committee website. Trump said he would back pro-Trump Republicans in congressional primaries where “necessary and appropriate”. It was hardly the first time he had issued this threat to rebellious Republican office holders.

“Mitch is a dour, sullen, and unsmiling political hack, and if Republican Senators are going to stay with him, they will not win again,” Trump said in the statement released by the Save America PAC. “He will never do what needs to be done, or what is right for our country.”

Trump never quite trusted McConnell’s political instincts which were to ensure a durable GOP Senate majority, not to promote Trump personally. And the courtly, traditional McConnell never hid his personal distaste for Trump’s rudeness and general lack of decorum.

The ex-President also revealed he hasn’t lost his singular touch to find the nastiest, most personal if unfounded insult to inflict on those who oppose him. Trump this week accused McConnell of being soft on China because of “his family’s substantial Chinese business holdings”.

McConnell’s wife, Elaine Chao, who served as Trump’s Transportation Secretary until she resigned in protest over the January 6 riot, was born in Taiwan.

The other predictable outcome of Trump’s Senate acquittal is the move to convene a Commission of Inquiry into his January mob incitement – and, probably, other crimes and misdemeanours the House prosecutors didn’t have time to examine before the Senate trial.

The American politicians aren’t calling the coming investigation a Commission of Inquiry, a term in common use throughout British Commonwealth common law nations including The Bahamas.

But given that Commissions of Inquiry are often formed after widely publicized events resulting in deaths or scandal or both, what House Speaker Nancy Pelosi is organizing is exactly a Commission of Inquiry.

Many observers are comparing this to the 9/11 commission, which investigated the terrorist attacks of that day. That commission took two years to deliver its report.

Now that private citizen Trump has been predictably acquitted by the US Senate in his second impeachment trial, the former President has emphatically signalled that he will not accept the fate some had forecast.

One pundit had predicted that Trump’s flight to Florida and exile from New York and Washington would lead to his becoming “just another ageing caudillo, basking in the fading glow of the glory years.”

While there is no precise definition in English of caudillo, which is often used interchangeably with warlord and strongman, the term basically denotes a “personalist leader wielding political power”. Caudillo does seem to define Trump, or at least some of his public aspirations, pretty well.

And his passage to Florida may echo similar moves taken by various Latin dictators to the Sunshine State over the decades.

When war criminals, guerrillas and dictators escape to South Florida, said Carmen Pino, onetime special agent in charge of the Miami office of Immigration and Customs Enforcement, “they want to blend in, and that’s easiest in an ethnic community full of people from the same place as you.”

Trump and Palm Beach? It appears that so far, the locals aren’t sure Trump fits in as a full-time resident. But you wouldn’t want to bet against his staying power.

The former President now joins the ranks of exiled strongmen from Guatemala, Bolivia, Honduras, Peru and Haiti who have sought and mostly found comfort in South Florida.

Perhaps the most notorious were the men whose excesses in power incited rebellions resulting in the present Communist/Socialist regimes in Cuba and Nicaragua.

Trump is the first former American President to seek retirement safe haven in South Florida. But then he was always different.

Manchester blue has it in the bag

The most competitive professional league in the world’s most popular sport has now passed the halfway point in its 2020-21 season. Still trying to shrug off the continuing disruptive scheduling effects of the COVID-19 pandemic, the English Premier League is back on track to complete its season in May as scheduled. Who’s going to win?

Right now, recent two-time champion Manchester City is in control of this year’s race. City hold a seven-point lead over their nearest pursuers and have played one fewer game with nearly two-thirds of the season complete. It will take a dramatic collapse to deny City their third title in the past four years.

City travelled to Liverpool 11 days ago and looked like losers for most of the game. But then they staged a late blitz and whipped the Reds 4-1. Even Liverpool’s irrepressible manager Juergen Klopp admitted that his team – itself one of the world’s best and the defending league champions – were out of the running this year.

Manchester City is on a long current winning streak despite missing its two most recognizable players, Argentine striker Sergio Aguero and MVP Belgian midfielder Kevin De Bruyne. This team is simply too strong and deep for its competition.

Liverpool, now in sixth place, has suffered from both inconsistency and the loss of its two most talented defensemen to season-long injuries. Still often awesomely impressive offensively, Liverpool are now in a dog fight for the remaining three automatic places in next season’s European championships.

Two of their main competitors for those Champions League spots are traditional powerhouses Manchester United and Chelsea. United currently sits in second place, and has been reignited in the past year by the arrival of electric midfielder Bruno Fernandes from Portugal. Man U is enjoying a fine season under its Norwegian manager.

Chelsea started the season fast, hit the skids and then fired manager Frank Lampard, the team’s all-time leading scorer. The club’s new German manager has the team undefeated so far, and the Blues seem to be rounding into form just in time to finish near the top of the EPL table. Chelsea now occupies fourth place.

Among the favourites every year to contend for the championship are North London’s Tottenham and Arsenal. Not this year. The Gunners often look lost against better opposition, and are not beating the league’s underlings as consistently as in the past.

As for Spurs, pre-season hopes were high in manager Jose Mourinho’s second season. He had won league titles in his second year at several previous coaching stops. But this year, Spurs may rely too heavily on a stingy defence and the breakaway threat of forwards Harry Kane and Korean Son Heung-min, who have missed games through injury.

There are two surprises at the top of the league table. Leicester, which shockingly won the crown in 2016, sits this morning tied with Manchester United in second place. The plucky Foxes, mostly finishing just outside the top four positions, have been mostly healthy this year and just stunned Liverpool last weekend. Depth is a concern, but Leicester may still surprise with a top finish.

Tied for fourth place today is West Ham United from London’s East End. The Hammers are having a season to remember. Lack of depth fuels scepticism here, too, however, that West Ham can finish the season in such a lofty position.

President Trump did nothing wrong and President Trump won that election by a landslide! The criminal Democrat party counted all the illegals votes to put in their senile husk Biden and the fake-black thot Kamala. The MAGA nationalist movement is here to stay and the clowns in the US fake news media must continuously talk about Trump because without Trump they have no ratings. The 2020 election was stolen through fraud, end of story.

Stay away from drugs kid...