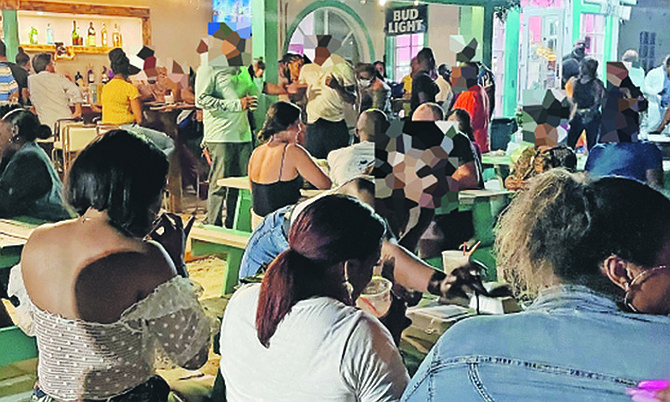 COVID-19 restrictions have, admittedly, crippled many businesses especially those in the entertainment sector. Yet it would appear the restrictions placed on businesses are seemingly being enforced on some while others get a free pass to do as they please.

For weeks now there has been much discussion about clubs operating outside of the COVID-19 restrictions in New Providence. Bahamians are not only said to be assembling in great numbers at these establishments, but there has been talk of no social distancing and masks not being a necessity. And, most alarmingly, these businesses are operating far past the 10pm curfew sometimes into the early hours of the morning without being shut down by law enforcement.

By Emergency Orders bars are still not allowed to operate and restaurants, food stores and other related businesses should be closed by 9pm to allow patrons and employees to be home in time for the 10pm curfew.

Recently, the National Security Advisor to the Minister of Health was on Paradise Island conducting a health and safety inspection when he noticed the Cabbage Beach Bar & Grill on Paradise Island in full swing after curfew with hardly a mask in sight.

Mr Robert Dupuch-Carron reported the matter to the police who, he said, seemed nonchalant about the whole matter. As a matter of fact, he said, he’s not aware of any followup.

Mr Carron went on to report the matter to the Minister of Health, Hon. Renward Wells. In frustration, Mr Carron decided to write the Minister of National Security, informing Marvin Dames how he reported the bar’s activities to Officer Rigby and the Officer-in-Charge of the Paradise Island Police Station several times to no avail.

“This isn’t about concessions under the Hotel Encouragement Act,” Mr Carron said. “This is about protecting our citizens and our tourist industry from the COVID-19 scourge sweeping the globe. Unless those living, residing or working on Paradise Island are exempt, we all need to play our part in protecting our nation.”

After many conversations with people who knew of the “after hours” revelry on Paradise Island, this writer, along with a photographer went to Cabbage Beach Bar and Grill last Friday night to see for ourselves whether the rules we’re all supposed to be following were being abided.

We arrived at Cabbage Beach Bar and Grill shortly after 9pm initially struggling to find somewhere to park. There were 85 cars strewn along both sides of the narrow road and adjoining corners. Noticeably, one of the cars parked directly in front of the establishment was a black, Ford Taurus government red-plated vehicle licenced #GV0---

Prior discussions led to questioning whether or not Cabbage Beach Bar and Grill was a part of the Paradise Island Beach Club where it would be allowed to fully operate because of being located in a hotel. However, that was soon dispelled because the bar and grill has its own entrance and no COVID-19 test was required as is required to enter hotel properties on New Providence.

A car with government plates at the location.

At the entrance, a security guard, after being very firm and dismissive to a few inebriated male patrons in the immediate area, asked me to look into my small handbag. Satisfied, he then put his metal detecting wand over the photographer and myself and then ushered us on the walk way to another waiting security guard.

Security guard number two administered a temperature check and after sanitizing our hands, allowed us in. There we entered an open space filled with picnic tables occupied to capacity with men and women mostly in their mid-thirties. In the spaces between the picnic tables others were gyrating to the sounds of extremely loud, soca music coming from the DJ’s set complete with loud speakers. The crowd was definitely shoulder to shoulder – standing room only – and being hyped by the mic-friendly DJ.

There was also a covered area with a large bar and other tables where all seats were taken and the over flow patrons stood in between. As we meandered through the tables and at least two hundred patrons, the smell of high grade marijuana permeated the air. We saw a few patrons enjoying marijuana joints out in the open while engaging in conversations with their peers.

The place was definitely “jumping” and only three patrons wore masks; one of them being me. Now this is what the Chief Medical Officer should call a super-spreader event.

The photographer and I settled in at the edge of a filled table to observe the scene before us. The smell of marijuana continued to dominate and quite appropriately, the DJ switched the music’s genre and the speakers belted out the tune, “One Draw” by Rita Marley. It was “Old School Night” the DJ said.

Stationed at the bar was a prominent public corporation executive. He was enjoying himself with no mask on. Near to the bar was a well known ex-Bahamas Air pilot. Quite a dancer he was.

At about 9.45pm a slew of hard core, rugged young men came in and as time advanced the crowd coming in looked more and more like those men. A few of them tried to enter through the exit, but a portly gentleman, believed to be the manager, stopped them.

Some of the patrons there earlier, began to leave as the DJ announced the kitchen was closing, and perhaps, they intended to be home before curfew. This announcement turned out to be a half-truth, because the grill was immediately lit and the raucous party continued.

At a few minutes to 10pm, the corporation executive made a bolt for the exit, bumping directly into me but with his eyes focused on the ground. Just seconds after he left police arrived - one small Nissan police car with lights flashing. Things became interesting then as the DJ turned the music down a notch or two, but the patrons were not leaving. They continued to drink and dance and eat from the grill. A few more minutes passed and the DJ made a second announcement, this time telling the patrons with much urgency that they must “leave now to avoid fines”.

The police officers stayed in the car as if in a “Mexican Stand Off” while the DJ pleaded with the patrons to leave. The patrons were clearly confused by his pleas, as it was obvious they were used to staying there after curfew even with some arriving at 9:55 pm.

Tired of hearing the DJ’s voice begging them to leave, the patrons started filing out. Annoyed, one young patron was heard yelling at the top of his voice to his peers, “Dese niggaz jokin’! Let’s go to Duckie’s Bar!”

Up to 10.40pm patrons were still “leaving” meanwhile the police officers finally came out of the car and started chatting with management while drinking a substance given to them in white styrofoam cups. Lots of laughter occurred in that conversation and not one fine was issued to the establishment or any of the patrons. The crowd took over the narrow road and a former PLP cabinet minister clambered into his Mercedes jeep, trying desperately not to make eye contact with the eyes in the fleeing crowd.

After watching for a while and realising some of the patrons were just not leaving the area, we left. We were later told the party resumed after we left.

On the way home, at the corner of Nassau Street and West Bay Street, the police had barricades set up and were visible, however no one bothered to stop and question me and by this time it was long after curfew.

First thing Saturday morning, I reached out to ASP Audley Peters, Police Press Liaison Officer, to inform him of what I had witnessed and to find out the rationale behind the police not being aggressive in shutting down the establishment and issuing finds. ASP Peters said he would have to find out what happened.

He returned the call to me later in the day and said, “I cannot comment right now because I don’t have all the facts. As far as the business establishment is concerned, I have to verify what type of business licence they have.

“Now with the actions of our officers, I had to speak with their commander and I am not getting clarity there either. Once I find out all of this I will call you back.”

ASP Peters did not call back.

Under Emergency Orders no business is allowed to stay open after 9pm and all citizens, besides a certain level essential worker, should be in their homes at 10pm.

Late Saturday afternoon, I called Cabbage Beach Bar and Grill and asked to speak with the manager on duty. A gentleman came to the phone identifying himself only as “the supervisor”. After I insisted that he identify himself, he resisted at first and then tossed out the name, “Edgar Roberts”.

I asked him about the violations of the COVID restrictions witnessed and he begged to differ.

The supervisor said, “I am not aware of anything like this as we are quite compliant with the COVID regulations. The questions that you are asking, unless it is a legal matter, the only thing I will say is that we are complying with COVID regulations and that’s all I have to say about that.”

Many restaurant and bar owners have complained about overzealous police officers coming into their establishments and scaring patrons and issuing fines. One man made a video which was circulating on social media complaining vehemently about being fined $500.00 for having a speaker outside of his eatery. He had no customers at the time. He said he was being fined for “running a discotheque” against Emergency Orders.

There were no overzealous officers at Cabbage Beach Bar and Grill on Friday night. It makes one wonder if rules in this country are only meant to be enforced on some while others get a pass.

Unfortunately theses types of gatherings are part of wider and pattern of behavior that is frightening.

They also occur at some AirBnB’s which fall through the cracks as they are small hotels. For enterprising foreign investors flush with inexpensive foreign currency they buy up properties rent them on AirBnB, pay no hotel occupancy tax, no Bahamian employees, no national insurance, no security staff to enforce the law, some have rental cars and pick up and drop off service. They are used for large parties and certain other activity detailed in a recent Nassau Guardian activity.

This is not a police issue. This is a Town Planning and regulatory enforcement issue.

No one seems to care.

All Covid has done is show the general population how corrupt we are as a nation. But its ok as there will come a time when we need it to be corrupt to help us and we will be happy it is.

That last sentence of yours could leave someone wondering whether you're among the corrupt political elite. lol