Look Like A Star – Finding Your Celeb Fashion Inspiration 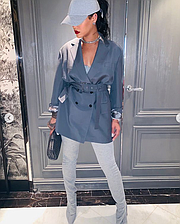 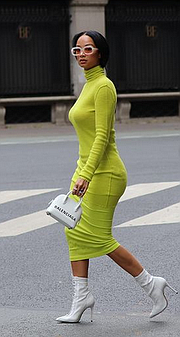 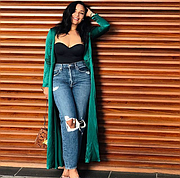 You see them on Instagram and on the cover of magazines. They are the fashionable elite: the celebrities who look effortlessly chic in their designer garb, which has been meticulously picked out for them by their stylists. And we all share the same thought upon seeing them: I wish I looked like that.

Well, even if you don’t have piles of money or a personal assistant, you can still look like a star. You just take your inspiration from the photo shoots you see online and make their style your own.

Tribune Woman spoke to a several of Bahamian women who shared their celebrity style inspirations.

“I have been a fan of Draya ever since her first season of ‘Basketball Wives LA’ in 2011. She has grown and matured so much and it shows through her style, which has been evolving beautifully,” said Deandra.

“Let’s take Fashion Nova for example, there are a lot of celebrities who I guess are paid to promote and put together outfits for the brand. And I don’t know if I have ever seen anyone put together an affordable outfit like Draya. I follow her and I am always like, she makes it look so easy, cute and trendy. She consistently finds the best pieces. Don’t let it be a Fashion Week going on, Draya’s Instagram page would definitely be the page and content you never knew you needed when it comes to style. She’s a baddie all the way.”

Philan Johnson said it’s the “old Kim K” fashions that have inspired her over the years. She believes Kim Kardashian is still a style icon today, but its her earlier, 2000s, fashion that she admires the most.

“I say the old Kim K fashion, because before Kanye went and switched up her closet, her colours were brighter and gave more statement looks. It was so girly and on-trend. You can tell it was solely her very own personality exhibited through her clothing choices. I think she’s slowly but surely getting back to that and I love it. She’s a style icon and I was always a fan of her style. But when it became the joggers, leggings and just nude colours everywhere, it became boring,” said Philan.

Meanwhile, its rapper Ludacris’ wife Eudoxie Bridges who is the style inspiration for Caroline Clarke. She believes Eudoxie is gorgeous and her styling looks effortless.

“I don’t think I have ever seen a bad photo of her style and fashion. She gives off a comfortable but glam mood at all times; it is simple yet so cute. From her kimonos paired with jeans and a hat to her dresses and heels, it’s done so effortlessly and classy. I love it. She even brings some of her Gabonese heritage into her fashion style. I have so many fashion inspo photos saved of her. And on top of her fashions, she seems to be such a genuine person with her friends and family,” said Caroline.

Kayla Evans has as her style icon a celebrity that women around the world have imitated for several years now: the Bajan queen herself, Rihanna.

“Rihanna not only inspires her fans, her style has also influenced and inspired some of our favourite celebs. A new Rihanna uploaded photo is guaranteed to be a fashion statement. Let’s take for example, recently she’s been sporting a mullet hair look. It’s not something I would personally do, but ever since I saw it on her this year there have been so many social media influencers and even celebs wearing the style. Now if that isn’t trendsetting, I don’t know what is,” said Kayla.

“I remember from her ‘If Loving You is Wrong’ days, I had my mom buy me outfits to match hers in the music video for the song. When she decided to go more edgy in ‘Good Girl Gone Bad’, I wanted to wear my hair the same way with the cuts and the colours. Rihanna’s style will never go out of style and she has always been the ‘It’ girl when it came to fashion. That is why her breakthrough in the fashion and makeup scene came as no surprise to me. She’s a triple threat: music, fashion and television.”