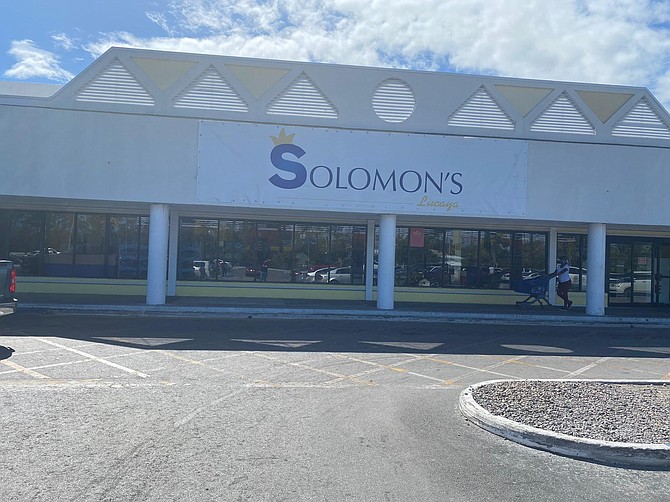 AML Foods Limited announced a $1million renovation of its flagship Solomon's store in Freeport, Grand Bahama on Friday. More than 95% of the work on the Solomon’s Lucaya project, which is expected to be completed by mid-June, will be carried out by local contractors and artisans. The company also stated that most of the materials being used for the renovations will be sourced and purchased locally on island.

"We stand firmly with our customers, our employees and the wider communities of Grand Bahama," he said. "For us, this project and our recent work at our Cost Right Freeport Distribution Center demonstrates our company’s unwavering commitment to the economy and helping the people of Grand Bahama to rebuild and live better”.

Mr Watchorn added that the renovations at the Lucaya store were originally planned for September 2019 but were put on hold due to hurricane Dorian.  The company planned again to start in April 2020, but once again the project was delayed, this time due to the COVID-19 Pandemic.

The renovations call for several major changes to the store's current layout, namely the replacement of check-out counters, all new decor, lighting, flooring, and signage, as well as enhancements to the store's refrigeration system and cases. Most of the heavy construction work will be carried out overnight to cause as little disruption to the store’s operations as possible.

The investment for the Cost Right Distribution Center project which began on January 4 and was completed at the end of February was $175,000. In this instance as well, 95 percent of the build out was done by local contractors and technicians.

“These investments will allow us to provide the people of Grand Bahama with even better customer experiences when shopping our stores”, said Mr Watchorn.

Really Sir? when you put your customer's purchases in their bare hands,

Sawyers your competition gives their customers bags. it may seem small but it shows they care.

Cry me a river. Give me a break. Who does not have a bag now is careless and not bothered to have one. AML gave away 50,000 bags for free to their customers, I doubt Sawyer’s did that. And if you are too lazy and thoughtless to take a bag then ask for a box, they give these away for free.

Not in Freeport buddy, they never have bags. Even if you want to buy them.

Because we live in a society that can never take responsibility for their lives or actions, everyone is a victim, everything is a personal affront. Why do u need a free bag, even if solomons has no bag to offer bring your own. But they get up here talking about carnival and shit. When I hop in a boat for a ride on the weekends I wonder whose bud light and coke bottles those are floating around out to sea, whose kfc boxes scattered on the side of the road, garbage dumped through side streets. But we love the environment. This person is an idiot so it’s best not to engage. When one gets to the point of arguing against the great atrocity to Bahamian society of reducing plastic bags, lol, we should just let natural selection deal with them.

Are you serious? How long has it been that you should know you have to carry your bag to the store?

Typical mentality of too many Bahamians. Expect everyone to do for them and never want to take responsibility for themselves.

If you so bothered by Solomon's not giving you a bag then don't shop there. Nuff said.

Really DONANTHONY?? of the peoples time voters. you have been proven wrong once again. nevertheless I am all right with you. You do not display a mean spirit.

Misguided weighing in the balance with roc wit doc

now days ever time his name is called. it is called with a few cuss words.

LOL. What do plastic bags have to do with politics? Why does everything in the Bahamas devolve into a debate about red or yellow? We are talking about bags and I am glad to be rid of those plastic curses. My island is much cleaner and we do not miss them. All the best to you but take a bag to the grocery store, practice independence and social responsibility, and keep our Bahamas clean.

The fast food joints are the root cause of most of the trash and rubbish strewn all over New Providence today. These establishments should be charged a hefty anti-pollution tax to cover the cost of government workers having to be hired to clean up the mess attributable to their food packaging discarded everywhere by their patrons. Such an anti-polution tax would also help increase fast food prices and thereby deter Bahamians from buying unhealthy fast food which is a main cause of our country's high healthcare costs.

Honestly. I wish Solomons would close and somebody who actually cares about service would take that store over. If you're out of something and need it now you don't go to Solomons, they'll be out of it too. How a food store can run out of bread is beyond me...

It is good to fix the store and expect that would come with competition.

However, the products need to improve.

The produce your store is bringing is rated as second class at best, especially lately in the areas of citrus, etc..

Either change the supplier or how you are shipping/receiving or both.