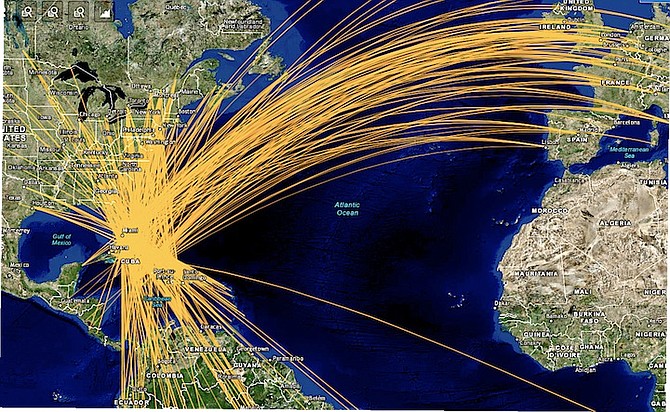 A group of Bahamian entrepreneurs have the “Green Light” for a $427M investment in what US global aerospace, defence, intelligence and weather contractor Raytheon Technologies has termed as the “ 'First-of-Its-Kind Transformational, Aviation Climate, Meteorological, Navigation, 3D Terrain, Street and Chart Mapping & Severe Weather Sensing Network... that exceeds those of any industrial nations” — providing Dr Minnis' administration with the components necessary to collect what is projected to be $300M in “Overflight Fees” from the 594,00 commercial, cargo and private carrier flights using Bahamas' sovereign airspace each year.

Disclosing that considerable time, effort and resources have been spent collaborating with various partners and the Dept of Meteorology, Mr Rees explained that while BACSWN owns the Intellectual Property Designs of said" WxSenseNet" it selected Raytheon's revolutionary Phased Array Skyler Radars - connected to a myriad of other highly advanced sensors, hydro-met buoys and 3D Street, Terrain Chart and Mapping Drones - at 109 sites across the Bahamian archipelago. That data will be fed into BACSWN’s patent-pending Convergence Centre and Raytheon's global Advanced Weather Information Processing System (AWIPS) so as to assist the Government of The Bahamas, NHC and NOAA minimizing the increasing risks of life-threatening events impacting upon our nation, its people, visitors as well as the aviation, insurance, maritime and tourism sectors of both nations.

Describing the real-time situational awareness and other ultra-long range weather products/services as "lifesaving", Mr Rees explained that BACSWN has identified Island Global Capital as its choice for an exclusive financial advisor.

"I'm confident that the once the Heads of Agreement is signed the necessary capital will be in place to bring BACSWN's unique, unparalleled, ingenious vision to fruition," added Mr. Rees

"Not only do we intend to transform our nation's capacity to detect track and respond to severe weather events at no cost to taxpayers," stated Mr. Adam Darville, VP Infrastructure, but build a facility capable of coordinating search and rescue operations, providing remote air traffic control services for any BCAA owned Family Island aerodrome."

The group's research, he said, has shown that by increasing the safety, capacity and efficiency of the flights using Bahamas sovereign airspace; commercial, cargo and private carriers could save as much as $1,000 per flight through fuel savings, wind assisted trajectories, direct routings, reductions in spacing, delays, weather deviations and other maintenance related expenses; not to mention,  providing bespoke services to the aviation, boating, cruise industry, hospitality, insurance, marine, media, navigation, ports & wedding sectors

"In the not-too-distant future," continued Mr. Rees, "Emergency Management officials should have a much clearer picture of the threats facing communities across the length and breadth of our nation's archipelago; alongside Hyper-Local forecasts and personalized Apps detailing the probability of adverse weather conditions. At the very least, utilizing the talents and resources of Raytheon and another BCASWN partners the group aims to transform the delivery of aviation, climate, meteorological and real-time weather data to the Office of the Prime Minister, NEMA, FAA,  NHC, NOAA and other entities to help reduce delays, inflight extensions, emissions and any hiurricane's "dreaded code of impact by as much as 50 percent”.

Mr. Rees says that BACSWN has completed its negotiations with the Cabinet Select-Committee and is "awaiting a final review of its Heads of Agreement" by the Office of the Attorney General. Thereinafter, the group hopes to conclude its Heads of Agreement with Cabinet and NYC based Island Global Capital - headed by the legendary financier Mr. Andrew Farkas.

Suggesting that the group will be at the forefront of creating "a new dynamic" when it comes to aviation tracking, climate and real-time severe weather sensing, Mr Rees said: “I’m proud to have been invited to play a part in bringing such an impressive, ingeniously designed vision to fruition - sprung from a napkin in Crooked Island."

Mr. Rees promises the Bahamian people will enjoy "real value over time" from this initiative and that BACSWN is of the mindset to offer shares to the public in due course.

"The ingenuity of the system we are bringing to the table, not only brings in life-saving technology as it relates to aviation tracking and real-time weather, but it empowers the Ministry of Tourism & Aviation to execute its mandate from the Office of the Prime Minister. Mr Rees said that BACSWN will create a "unique synergy" with the Government's aviation sector ambitions, especially the levying of overflight fees on aircraft so that they can pass safely and efficiently through The Bahamas' sovereign air space on their journeys' to the US, Gulf of Mexico and Cuba from EU, UK, North, Central and South America and the Caribbean.

Hopefully, the Federal Aviation Administration (FAA), US Coast Guard and air carriers will no longer voice concern about the "safety hazard" for flights operating in Bahamian air space, given the lack of real-time weather data in areas prone to sudden - and significant - changes in atmospheric conditions. Mr Rees said that BACSWN's system is uniquely positioned to resolve these issues as well as weather deviations and the need for increased separations which have plagued our overcrowded airspace for some time.

"We look forward to providing advance warning of potential areas of concern as well as concurrent real-time situation awareness to both the FAA, carriers and flight crews

"Our primary goal is to support the Government of The Bahamas to avail our nation of its sole, sovereign and exclusive right to charge "Overflight Fees" for Air Traffic Control, Navigation, Communication, Crash, Search & Rescue, Health and EMS facilities as well as sector charges and environmental levies," continued Mr. Rees.

BACSWN will charge users a fee for providing real-time aviation tracking and meteorological weather services, although the information will be supplied to the Government & FAA for free. Under a public-private partnership model, Mr Rees said there would be a revenue sharing arrangement with the Government

"While there's lot of moving parts, we've got the talent, expertise, sources of funding, strategic partners and the technology lined up to meet an aggressive 24-month timeline in order to reach our initial operating capacity.  At the moment, were in the process of standing up a Meteorological Watch Office while waiting on the Office of the Attorney General."

In the interim. BACSWN's has already received backing from Director of the Department of Meteorology, who called project the answer to their prayers!

“The design of this network is so advanced that we'll be able to create near-live Street Level 3D Impact Based simulations in order to give citizens the most accurate and up-to-the-minute hyper local warnings of any potential weather" stated Director Basden. "Right now, we cannot do that because Doppler weather radar are not designed to do that," he added

"If you have a tropical cyclone moving and based on how the models and the information are given, it can tell the various degrees and stages of damage, flood and water infiltration at various points and we could describe it more accurately. Right now, we just say ‘flooding’, but we will be able to graphically show where the water levels will be on the houses and infiltration in areas. My Doppler weather radars, mainly (allow) for me to see what is approaching The Bahamas at a distance."

“Frankly,  I can't wait to see what Director Basden, Mr. Simmons and the rest of Met. team can do with a system that’s the best in the world!” said Adam Darville.

"What will set us apart is not only being able to ingest data from a variety of sources, but the unique manner in which we intend to visualize such using a augmented reality gaming engine" said Mr  Rees.

"Anyone can check whether it's going to rain on Saturday! We're going to provide the most accurate, immersive, 3D interactive experience possible!

"We have a number of Bahamians who are assisting in various ways behind the scenes until our Heads of Agreement is signed and plan on inviting other Bahamian entrepreneurs to collaborate with us on the design of other products/services for the hospitality and event planning industry. In the very near future we hope to hire a number of staff in order to send them off for specialized training!"

The Tribune has learned that Julian Rolle has accepted the post of Chairman of the Board; Eileen Dupuch-Carron is Executive Chairman, Mr. Adam Darville as VP of Infrastructure,   Montino Roberts, VP of Information Technology, Glen Ward. VP of Business Development, Burton Rodgers, VP Governmental Affairs and Portia Nicholson of Higgs & Johnson serves as the group's legal advisor. The project will likely create 450 jobs during the construction phase with an estimated 300 full-time positions once BACSWN reaches its full operating capacity.

Sounds way to good to be true- whose pockets are getting lined on this one?

so true bahamarich. sounds too good to be true, much like Oban, Bahama Petroleum.

but yet the impact on bahamians enormous.

i doubt another $300 million in revenue for the government will stop the massive annual deficits. they will find away to wittle it away with no audits, reviews, easily accessable financial statements or explanations to the bahamian ppl as to what is actually going on

Indeed, sounds very good, but how does that fit in what the US is saying is theirs already? https://www.faa.gov/air_traffic/inter...">https://www.faa.gov/air_traffic/inter... . This would give the govt some $600 per plane using the aerospace, so I guess the cost for the airline will be double that., and that on top of what they already need to pay to FAA. It does not come down to a big amount per seat (if all were passenger planes) but I am sur the airlines will have something to say about this too. So it will probably be down to who are the better lobbyists.

A story without a byline on the front page of this newspaper.

Some of the persons involved in this venture are the same persons behind the public private partnership to the manage the historical sites for the AMMC.

Is this the same Andrew Farkas who had close business ties with Jeffrey Epstein? LOL