Warm Welcome For New Minister Of Youth, Sports And Culture In Freeport 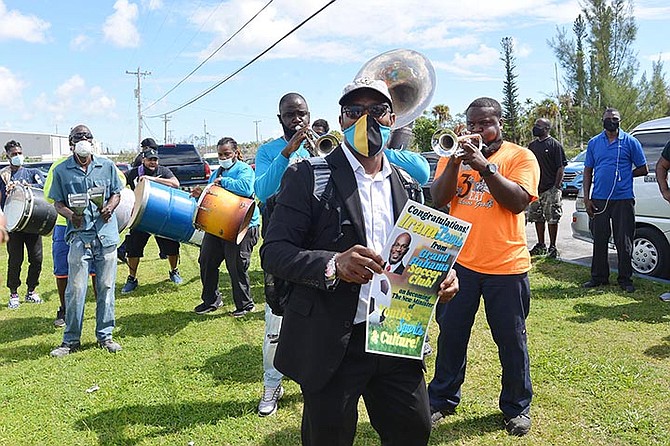 IRAM Lewis, the new Minister of Youth, Sports and Culture, returned to Freeport on Friday to a warm welcome from a large turnout of well-wishers at the Grand Bahama International Airport.

Junkanooers and representatives from various sporting groups were at the Western Air terminal for the minister’s arrival around noon.

As he made his way from the terminal, he was celebrated with a small Junkanoo rush-out.

Mr Lewis said he did not expect such a welcome.

“It is unexpected and very humbling,” he told The Tribune. “I am humbled and I am happy to be home.

“I realise one thing that it is not about me, it is about what I can bring to the MYSC; it gives me an opportunity to serve at another level. First of all, I have to get my bearings as to where we are in the ministry, and once I am fully acclimated, I will look at programmes that exist.”

With about a year to the 2022 general election, Mr Lewis believes it never too late to make a difference, “even this late in the game.” The former athlete said not to count him out.

“It is never too late I thank God because God does things in His own time,” he said. “I understand that as an athlete you must stay focused, and as an architect, you plan properly and carry out your plan. So, in my view, it may be late in the game, but…the game is not over, so I don’t think it is too late.”

Asked whether his ministry would support something named in honour of well-known Grand Bahama swim coach, the late Bert Bell, Mr Lewis said: “Absolutely, it is something we would support. Mr Bell is certainly deserving of something prominent and something substantive named in his honour,” he said.

“And the last time I worked closely with Mr Bell was when I was vice president of the Bahamas Olympic Committee, and when I had the Youth Olympic Games in GB, and he was one of my coordinators; he was a go-getter. He was able to pull off the whole swimming portion of that on his own.

“Of course, his name is well-known not only in GB but the entire Bahamas. So certainly, he will be recognised and persons like that we will seek them out. Persons who have been forgotten, we need to go ahead and honour those who laid the foundations, and… Bert Bell is certainly one of those who would have laid the foundation.”

Mr Lewis stressed that sports and culture are “powerful avenues” that can bring the country together.

He believes that events such as the Bahamas Games achieved that. “We have to find avenues to continue to unite and bring the country together. We know sports and culture bring the whole nation together. When we had the Bahamas Games, I was happy to bring several gold medals to GB, and the camaraderie and just the unity from Inagua to Abaco, we made connections and lasting friendships, and I understand how important it is to unite an entire nation.

“Sports and culture are very powerful avenues to bring about healing, relief, and connectivity, and brings us back as one; we can’t ever forget our very rich culture. I believe we have an opportunity to bring this nation together again, inspire the youth and remember the old.”

When asked about youth violence, he said his ministry will certainly to put programmes in place that will deal with discipline and conflict resolution.

He said officials will engage youth leaders on Grand Bahama such as Pastor Darrin Rolle and Bonnie Basden about the issue of youth violence in the community.

“We need to engage them…and some of them are engaged, but I think we need to reach out further to expand our reach and pull them all together and find out the cause. We have to get to the root cause of why they are so violent and why they are not able to resolve their conflicts.”

“This is a day in the making…,” he said. “I know Mr Pintard was (minister of youth, sports and culture) for a while, but we did not get a chance to do anything. But we want them to know that culture is also in GB and not just in Nassau.”

He believes that Grand Bahama and the Family Islands are being treated as less than or differently to New Providence.

“Every time something comes up...we get the peanuts in Freeport and the Family Islands. So, right now, it is a pleasure to have someone, a native son of GB, that can have a listening ear. And I am sure that Mr Lewis is a person that is interested in culture and sports so we can get some things done,” Mr Curry said.

(Posts) What was the one true root which brought about the sudden Changing of the Ministerial Guard that will arouse the Tribune's FREE port, readers - Posts by Comrade Tal