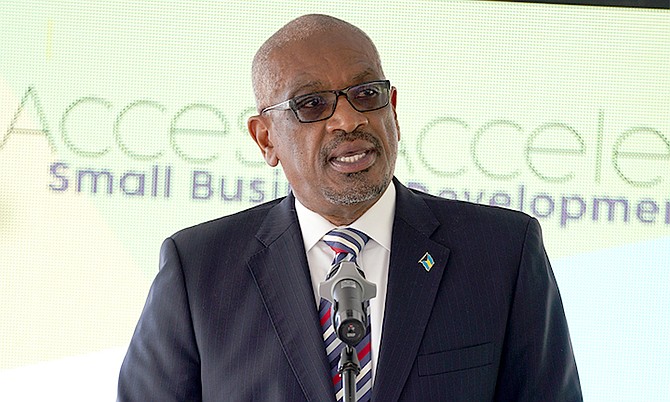 The Prime Minister wants to create a land registration system in The Bahamas in a bid to eliminate the abuses and "injustice" suffered by thousands of Bahamians under the present opaque order.

Carl Bethel QC, the attorney general, told Tribune Business he had been asked by Dr Hubert Minnis to move ahead with legal reforms that would ultimately result in the ownership "of every scrap of land" in The Bahamas being recorded on a central database accessible to all citizens and residents.

This, he argued, will provide "greater security of title" for land and property owners, while helping to prevent the recurrence of scams such as that which occurred at Sir Lynden Pindling Estates. The Government was forced to intervene and pay "several million" in taxpayer dollars to secure hundreds of homeowners who purchased lots from fraudsters who did not own the land they were selling.

However, Franon Wilson, president of Arawak Homes, which multiple court rulings have confirmed as the legitimate owner of the 156-acre tract involved in that affair, urged the Government to act quickly and close all possible legal loopholes given that land scammers already appeared to be changing their tactics.

He said they were no longer seeking to dupe the Supreme Court into issuing Certificates of Title via fraudulent abuse of the Quieting Titles Act, but were instead increasingly attempting to have deeds that "vested" and transferred real estate ownership to them recorded in the Registry of Records by the Registrar General's Department.

"What we are seeing now is that the sort of people who started the issue, in terms of going to court and getting a fraudulent Certificate of Title for the Pinewood Gardens area (Sir Lynden Pindling Estates), have changed their method," Mr Wilson said.

"They are using the Registrar General's Department through different ways to advance the same thing. It seems as if people realise what did work in the 1980s and 1990s does not work today, so they're changing their method. Hopefully the Government and Attorney General's Office are mindful that the situation can repeat itself in a different form."

Mr Bethel last year confirmed an internal government probe was being conducted into how a deed purporting to transfer ownership of a 1,000-acre western New Providence land parcel - including the upscale Lyford Hills and Serenity subdivision - was accepted for recording in the Registry of Records when it was defective" and non-compliant with the law.

However, he this week said that the Government, in response to the scam at Sir Lynden Pindling Estates and countless others like it, was seeking to push ahead with legislation to create a land registration system in The Bahamas.

Mr Bethel, disclosing that the Attorney General's Office had almost finished work on the proposed Bill, said switching to such a system was easier than trying to reform the existing Quieting Titles Act to prevent its exploitation by attorneys and their unscrupulous clients.

"A lot of it turns on the Quieting Titles Act," the attorney general told this newspaper. "The Quieting Titles Act has been the source of much injustice and claims of injustice over the decades. To try and amend that to stop the crooks, it would be quite an undertaking." Such reform efforts, he added, dated back to the Pindling administration, but had never been brought into law.

Instead, Mr Bethel said: "What the Government intends to do is move to a system of land registration. We have a Bill that we have been working on that is basically finished, and the Prime Minister has indicated he wants to proceed with that.

"Starting in the developed areas, and moving to the Family Islands, every scrap of land will be registered on a registry. It's where the owner of record will be recorded in the land registry as owning that land. It will give greater security over titles with respect to land ownership. The Prime Minister has recently asked me to do that."

Mr Bethel said all charges, such as mortgages, and claims relating to every piece of land in The Bahamas would be recorded in such a registry. However, mapping and registering every parcel of land in the Bahamas, and the different types of ownership such as commonage and generational land, would likely be a mammoth undertaking requiring decades of work.

The attorney general acknowledged that a body would need to be created to oversee this process, with multiple technical staff hired to perform the necessary work, while a disputes resolution panel would also be required.

There will also be much scepticism as to whether a land registration system will ever get off the ground. For the last Ingraham administration led similar efforts almost a decade ago to develop a three-strong package of Bills that would have overhauled the existing system.

These Bills - the Land Adjudication Bill, the Registered Land Bill and the Law of Property Bill - would also have created a land registry in the Bahamas, and given commercial and residential real estate buyers greater certainty that they had good title to their properties.

A land registry would contain all information relating to a specific parcel of land in one database, including its location, dimensions, ownership interests and all encumbrances, such as mortgages and other liens/charges.

Moving to a such a system - and registration system - would remove the need for attorneys to conduct expensive, time consuming title searches that are sometimes prone to error, and move the Bahamian real estate market away from being based on “first to record” title deeds.

Many have referred to the present system as "a lawyer's dream", with attorneys earning a set fee - normally equal to 2.5 percent of the purchase price - for conducting title searches and providing "opinion on titles". Those not employed in the legal profession find it virtually impossible to navigate the system as structured and perform their own title searches.

Courts at all levels of the Bahamian judicial system have previously warned how the present system is wide open to abuse. Appeal Court justice, Stella Maureen Scott-Crane, warned in a 2016 ruling that the Bahamian court system was susceptible to being “an unwitting pawn” in the commission of land thefts/frauds.

She said the Quieting Titles Act, in particular, was effectively being employed as a tool to steal land, given that “material facts” relating to title applications were often hidden from the courts.

Ruling on a family-related land dispute in Exuma, Justice Crane-Scott wrote that the case “exemplifies the kinds of egregious abuses - ranging from the fraudulent concealment of material facts to the deliberate manipulation of the statutory requirements of the Quieting Titles Act - which can occur in the course of quieting proceedings........

“Where material facts, such as the existence of adverse claimants, are deliberately suppressed and concealed, and where additionally, the petitioner knowingly represents to the court - as required in section 5 - that ‘full and fair disclosure’ has been made, the court may nonetheless unwittingly become a pawn in a fraud and deception...”

This is exactly what happened in the Sir Lynden Pindling Estates matter. Two 'front men', John Sands and Thaddeus Johnson, were put forward to claim some connection to the targeted property, such as having farmed it in the past. They were controlled by the scheme’s architects, who stayed out of the picture until the title certificate was obtained.

To obtain a title certificate via the Quieting Titles Act, parties using this mechanism must advertise their move in the official government gazette (newspaper) so that neighbouring landowners and others who may claim ownership of the subject property are informed and can contest the move.

This was not done in either the John Sands and Thaddeus Johnson cases, with the perpetrators falsely certifying to the Supreme Court that this process was followed so they could obtain title certificates to a property already owned by Arawak Homes.

Once the title certificates were in their possession, those behind the Sir Lynden Pindling Estates fraud immediately "washed" or laundered the title through a series of transactions that on-sold it to companies such as Horizon Systems, Bahamas Variety Company and C.B. Bahamas.

They then started selling the property to unsuspecting low income Bahamian buyers, often for prices below market value, who did not equate "a sweet deal" with a potential scam. Many were also suckered in by relatives who vouched for the bona fides of those promoting the scheme, while others did not think to - or could not afford to - hire attorneys to conduct title searches on the property.

Well the PM is one of the only people who can make this change. But i have heard this said numerous times before so i don't expect any change. In addition, why in the world has those people responsible for the Sir Lynden Pindling Estates not been brought before the courts and all their assets seized. Why should i as a taxpayer have to make those they defrauded whole? I expect this to be a typical Government response to try and quell any displeasure at what they have done, by claiming that they will fix the problem. They have said they will fix this problem numerous of times before only to do nothing ( Not just this Government but everyone of them) so nothing will happen this time.

Plays so true to highlight the man's character disorder to only now be pushing for the cleaning up of land titles but only after the decades in the making land scam which will cost millions of dollars to PopoulacesPurse made its way onto the Tribune's front-page headlines. Shakehead a quick once for upyeahvote, Twice for not?

All Lip Service, if it happens I will applaud the government but I just don't see this going anywhere. it has been only lipservice for 40 years, why would I be gullible enough to believe that something is going to change now? What I dont understand is how it got to the point of having a house on it before Wilson decided to raise the issue. Like how do you not know that several people are building homes on land you own for years... It just sounds like a setup to screw money out of govt.