Front Porch: Standing On The Shoulders Of A Nation Builder 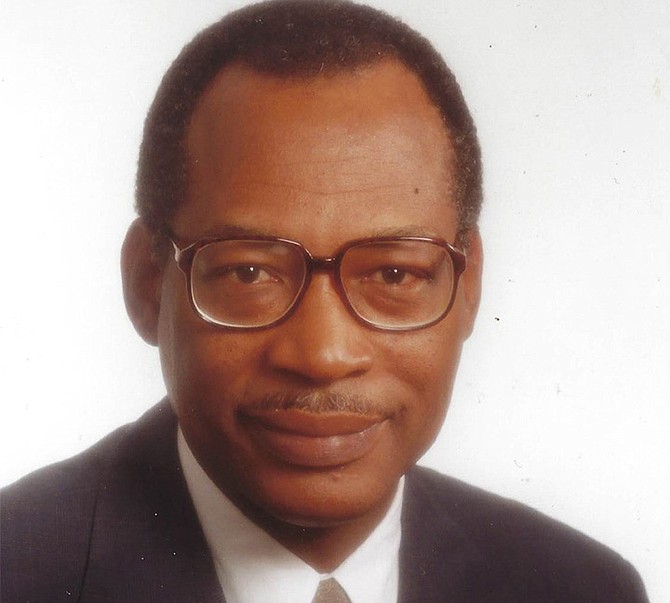 SIR William Allen was a man of dedicated public service who enjoyed and cultivated the life of the mind. During an exemplary public career he employed his prodigious intellect, reflective nature and good judgement in the service of a sovereign Bahamas.

The term nation-builder is sometimes overused. But in Sir William’s case it aptly captures the legacy of a man who helped to build various national institutions and who understood the country’s developmental challenges and responded enthusiastically with ideas and initiatives to meet them.

As a gifted young man, he pursued tertiary studies in the United States, obtaining “a Bachelor’s Degree in Accounting from the School of Commerce, New York University and a Master’s Degree in Economics with a concentration in International Finance from Baruch College of the City University of New York”.

In New York he worked as an internal auditor at a securities company and later as a budget supervisor at JC Penney Company headquarters. William, or “Bill” Allen as he was better and affectionately known, could have had a lucrative private sector career in the United States if he desired.

But as a newly independent Bahamas was emerging, a public-spirited and patriotic young Allen returned home to lend his talents and imagination to nation-building. His talents included financial and economic acumen harnessed to a pragmatic progressivism.

Such skill and acumen were bolstered by a thoughtful and deliberative manner. He was also a man of tremendous integrity and honesty. He began his public service in 1970 as Research Manager at the Bahamas Monetary Authority, the forerunner to the Central Bank of The Bahamas.

A strong, independent Central Bank is a critical national institution. After its establishment in 1974, he was appointed Deputy Governor, while continuing to serve as Research Manager until 1976.

He became the second Central Bank Governor in 1980 following in the footsteps of the dapper and legendary T Baswell Donaldson. Mr Allen retired as Governor in 1987.

During his 17 years with the Bank he helped to build the institution and to institutionalise numerous banking and financial practices and legislation for a modern Bahamas that was also developing as a noted international financial services centre.

Sir William also played a leading role in the development of our national flag carrier. In 1973, he chaired a committee for the establishment of Bahamasair, serving as first chairman of the airline’s board from 1973 to 1980.

A well-read intellectual, he offered his thoughts and views on a wide range of topics, offering insight on the issues of the day as well as specific ideas to respond to the array of national challenges.

A cosmopolitan spirit, widely-read on international affairs, he appreciated the imperative need to make ideas applicable to The Bahamas.

As a pragmatist he also appreciated that change sometimes takes time and that a long-held goal is sometimes best achieved incrementally. He also knew when it was time for bold action in public policy.

Many enjoyed reading his weekly contributions to national dialogue, including this writer, who called to ask for a meeting to discuss a number of things he had written and to ask his advice on a number of matters.

Given his stature in the country, as well as his courtly and impeccable manner and dress and his politeness and civility, this columnist expected a somewhat conservative and reserved individual.

Though he was quite mannered, Sir William was very down to earth, approachable, interested in thoughts of younger people, open to banter and discussion, happy to offer thoughtful advice then and even many years later, including suggestions for this column.

He also had a sense of irony, which sometimes erupted in humorous asides during conversations.

Prior to the Free National Movement becoming the government in 1992, Sir William generously offered advice to Opposition Leader Hubert Ingraham, who recalls that the former helped to draft the economic and financial platform of the party leading up to the 1992 victory.

Mr Ingraham knew Sir William when the former was a PLP Cabinet Minister, noting the latter’s assistance in helping to get commercial banks to help Bahamians to secure mortgages for housing.

After the FNM won in 1992, Sir William was appointed to the Senate and served as Minister of State in the Ministry of Finance and Planning. He was elected as the Member of Parliament for the Montagu Constituency in 1994, and was subsequently appointed Minister of Finance, a post he held until May, 2002.

The Bahamas of today is dramatically different than the Bahamas pre-1992. Successive FNM governments, including those from 1992 to 2002 transformed the country in numerous ways from progressive social policy to vast public infrastructure

As Mr Ingraham noted, Bill Allen played a tremendous role in this transformation and era of reform and modernization. He once said of Sir William: “William Allen is one of the unsung heroes in terms of public service in The Bahamas.”

Sir William was not an armchair critic, who refused to serve in government or indeed on the front lines.

Nor was he like those who take their privilege for granted and who fail to evince an appreciation for those who served in the arena, often slogging away at the daily business of government which requires time, patience and dedication.

Though it has often been noted, it is worth repeating again Theodore Roosevelt’s famous quote from his “Man in the Arena” speech in reference to the public service generously and cheerfully given by Sir William.

“It is not the critic who counts; not the man who points out how the strong man stumbles, or where the doer of deeds could have done them better. The credit belongs to the man who is actually in the arena, whose face is marred by dust and sweat and blood; who strives valiantly; who errs, who comes short again and again, because there is no effort without error and shortcoming; but who does actually strive to do the deeds; who knows great enthusiasms, the great devotions; who spends himself in a worthy cause; who at the best knows in the end the triumph of high achievement, and who at the worst, if he fails, at least fails while daring greatly, so that his place shall never be with those cold and timid souls who neither know victory nor defeat.”

It is all too easy to lob criticisms from the sidelines of public service and history. But is a greater form of citizenship to spend the countless and often thankless hours doing the hard work of national development?

When presented with an opportunity to do so, Mr Ingraham requested that Mr Allen be knighted for his extraordinary contributions to public service and national development.

Sir William, who also served as Deputy to the Governor General, has left a tremendous example of public service.

Mr Ingraham described his contributions as “stellar and singular”, a fitting tribute and an epitaph of which any citizen should be proud. It was the country’s great fortune to have another such fine public servant as Sir William, whose living legacy is all around us and will endure past the lifetimes of most of us.