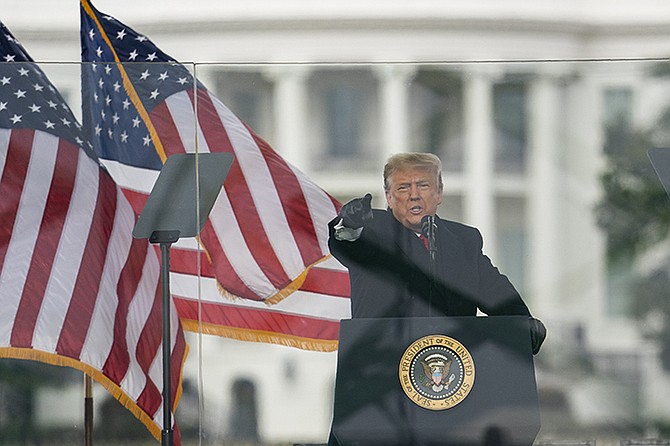 DAWN broke cold, grey and wintry over much of the American Northeast yesterday.

But it was sunny and warm in many minds.

As the Democratic leader of the US Senate said, while unsuccessfully trying to suppress a wide mid-morning grin, “Who’d have thought it was possible?”

Chuck Schumer’s elation was echoed in many towns and cities across the US. Improbably, Democratic underdogs won both of Georgia’s hotly contested run-off election races, and now the Senate is evenly divided 50-50 between Republicans and Democrats. Vice President-elect Kamala Harris, herself a retiring senator, will preside and break ties.

The nation will be spared at least two more years of Mitch McConnell’s dour and obdurate obstructionism.

As the US Senate and House of Representatives gathered for a ceremonial endorsement of the November 3 election results yesterday, they all knew the Dems would control Congress and the White House on January 20.

And incidentally, the Democrats’ remarkably poor overall performance in the general election was largely mitigated by the unexpected Georgia results.

There were remarkable sound bites all over TV and the newspapers throughout the day. Probably the most trenchant and most memorable comments were delivered by the avowedly outspoken and Republican partisan Gabe Sterling in a memorable morning press conference.

Sterling, the voting systems management administrator in the office of the Georgia Secretary of State, clearly relished his continuing moment in the glare of the bright TV lights. He pinned the blame for the GOP defeats squarely on US President Donald Trump.

After practically begging for a question seeking his assessment of responsibility for the shocking Republican losses, Sterling looked squarely into the camera and said: “Donald J Trump.”

At the same time, thousands of Trump supporters stood by in the blustery January cold on the National Mall waiting for Trump to make a promised appearance and listening to falsehoods and debunked conspiracy theories spewed by the likes of ex-New York City mayor Rudy Giuliani and other Trump enablers.

Many of the visiting protesters had driven for days to reach the capital, heeding the call of the President.

As these loyal supporters showed their support, Trump kept them waiting in the cold while he unleashed a Twitter tirade against his most consistently devoted follower.

Fixated on the fictitious notion that his vice president could somehow overturn the results of the election, Trump excoriated Mike Pence for respecting his constitutional duties and limitations above a doomed attempt to subvert the American electoral process.

Americans could only look on in wonder and amazement this week as their President persisted in his brazen ambition to avoid ceding the presidency. But almost as astounding as Donald Trump’s behaviour is the staggering amount of leaking to the press going on in and around the White House.

Day after day, new dramatic vignettes are breathlessly reported by the mainstream American press Trump so clearly despises and fears.

Newspaper readers especially have now grown accustomed to explosive quotes and revelations prefaced by something like the following: “According to a senior official who spoke on the condition of anonymity to relay the President’s state of mind and statements…”

Or how about this: “She could not speak on the record because she was not authorised to speak publicly about confidential discussions inside the White House.”

Unlike former American President Richard M Nixon, to whom Trump is most frequently compared these days, the current American leader doesn’t seem all that unsettled by the negative or even derisive coverage he is receiving from all segments of the news media except from a diminishing number of die-hard right-wing commentators.

The President has often said any publicity is better than no publicity. Name recognition is everything. His adherence to this dictum has rarely been tested as it has been in recent days. But it’s hard to imagine there are even 10, 000 Americans from among more than 330 million who have never heard of Donald Trump.

To be unfamiliar with his name at this point, you’d almost have to have been living in some remote cave for the past nearly 40 years, like the Japanese soldier who emerged decades after the end of World War II unaware the conflict had ended.

It is hard to know how to respond to Trump’s antics and tactics. This man is truly a one-off in American politics, and it just gets weirder by the day. For example, he has rarely been more carelessly transparent in his disdain for professional politicians of both parties, saving his praise only for those whose fealty is constant and passionate.

Of course, Trump’s scorn toward professional politicians matches the mood not only of his notorious base but also of many millions of other voters, including Democrats, who have long found wearisome the sanctimony, hypocrisy and even mendacity of their elected representatives.

Since the early 1990s, it has seemingly become acceptable to disrespect and berate legislative and presidential elders.

Bill Clinton was impeached for far less misbehaviour in office than what was ignored during the administrations of John F Kennedy and Lyndon Johnson. George W Bush was widely derided as a puppet in the manipulative hands of Vice President Dick Cheney. Barack Obama’s provenance and legitimacy as an American presidential candidate was impugned for years, most notably by his successor in the White House.

Now Trump is routinely called a racist, a liar and an existential threat to the present and future of American democracy. Few even talk any more about his philandering, tax cheating or Vietnam War-era draft dodging.

If he responds at all to the avalanche of criticism aimed his way, it is to dismiss it all as “fake news” or the product of sinister actors predetermined to engineer his downfall.

The President has reportedly told friends he would rather lose with people thinking it was stolen from him than that he simply lost.

The pages of timeless fiction chronicle tragically flawed characters, some of them resembling the current President. But this is real life, unrehearsed and in living colour. The US is going to need some time to recover from what’s going on just now.

Indeed, as we went from dawn to sunset, and the Capitol building was stormed by Trump supporters, we saw even more ways in which the US needs to recover. There’s a long way to go.

Don’t worry, the story’s far from over

President Trump’s legal future after he departs the White House, meanwhile, is looking increasingly problematic. A scorecard is necessary to keep track of all the litigation pending against him and the Trump Organization.

The Democratic-controlled House of Representatives is after Trump’s and his organization’s tax records. Subpoenas from various congressional committees have been issued seeking his tax records from Mazars USA, the President’s personal accounting firm. That case has bounced around for months from the Supreme Court to the US Court of Appeals to district court, so far without resolution.

Another congressional subpoena seeks Trump’s and his organisation’s records from Deutsche Bank, the German giant financial institution that has served as Trump’s apparent lender of last resort in recent times. A New York appeals court is working on that one.

Manhattan District Attorney Cyrus Vance Jr is conducting a criminal investigation and studying those pesky hush money payoffs to a stripper and a Playboy model to keep quiet before the 2016 election about their affairs with Trump.

Vance Jr is the son of a former Democratic Secretary of State. State Attorney General James is also a Democrat. Both have vowed to continue their investigations after Trump leaves the White House.

The President is also facing defamation lawsuits brought separately by two women who have accused him of sexual assault. And his niece, Mary L Trump, is suing him and his siblings over an inheritance dispute. He’s also being sued over apartments his family once owned, and by people who say they saw little to no profit after joining schemes touted by Trump and his children.

But Trump is quite accustomed to litigation, as we see from the many lawsuits his representatives have fruitlessly brought to try to overturn his November election defeat. Would you bet against him prevailing in all these pending cases? His efforts to do so will surely keep Trump in the headlines for months if not years to come.