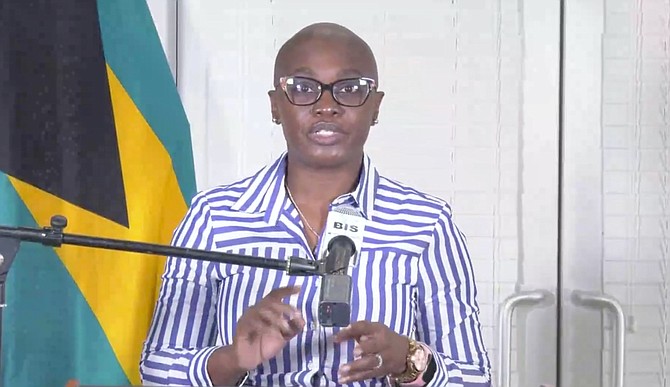 FORTY-SIX percent of travellers required to take the rapid antigen test five days after arriving in The Bahamas have not complied with the requirement, health officials revealed during a press conference on Friday.

The weak compliance rates are likely to raise concern as the country braces for more infectious variants of COVID-19. Dr Moxey admitted officials must address the issue but it was not clear what is being done to boost compliance or hold those who do not adhere to the rule accountable.

Dr Moxey’s statement came after Chief Medical Officer Dr Pearl McMillan revealed that since November 1st, 113 travelers have tested positive for COVID-19 after five days in the country with the antigen test.

“There is a bucket of individuals who at the fifth day tested negative and that is roughly 26,000 individuals who tested negative," Dr Moxey said. "Now we get to that bucket of individuals who were not tested. That number when we just look at it in an absolute sense seems like a lot, it’s a little bit over 43,000. However, we have to look at the data in terms of who was eligible to have the five-day rapid antigen test done and when we look at those who were eligible, i.e. those who have been in The Bahamas five days or longer, we see that there is about 21,000 or about 46 percent of individuals who were supposed to take the antigen tests but did not take it so there is some concern there. We certainly need to ensure that people who are supposed to take that rapid antigen test actually do take it.”

Dr McMillan said 70,000 antigen tests have been performed for travel purposes since November 1st. Of the 113 positive cases, she said 58.4 percent or 66 people were tourists who travelled to New Providence, Grand Bahama, Exuma, Abaco, Eleuthera, Bimini and the Berry Islands. She said 34.5 percent of cases or 39 people were returning Bahamians. They were traced to New Providence, Abaco and Grand Bahama. She said less than one percent of the positive cases could not be categorised.

She could not say how many of the positive cases had their result confirmed with a PCR test as required by ministry protocols. She also could not say what percentage of COVID-19 cases since November 1st were contacts of positive travel cases.

“That is an area that we recognise is a gap and we are seeking to work closer as Dr Moxey alluded to, we have to work a little closer with our tourism partners to ensure that we are actually getting these persons tested and that we are actually getting a little more access to the data to be able to give the true numbers,” she said. “But we have a robust partnership so we anticipate that that will occur.”

The press conference was the first since November and officials highlighted the stable COVID-19 situation in the country, noting that hospitalisation rates are still declining and that festivities surrounding Thanksgiving did not produce a sustained boost in positive cases.

Dr Gillian Bartlett, head of the COVID-19 task force in the Family Islands, said the first San Salvador case was a native who travelled to New Providence and was found to be positive through a PCR test while trying to get back to their island. She said the additional five cases originated in San Salvador when the people emerged with flu-like symptoms. She said they had no history of travel outside the island.

I say bring the death penalty back.

the thing is when they laid out the 5 day plan, everybody said, no tourist coming to check you after 5 days. It was a very weak plan. Next question how many of the 26000 were fined on their way out the country?

Is Comrade Sister Dr. Cherita aware that according to my sources this past Friday and the over Weeknd her medical stations in the Abaco's were turning away some of the 21,000 visitors with pre-booked appointments get the COVID Test - directing them contact stations medical staff members on Monday to make a new appointment - and to check-in see if they had received their expected new shipment COVID test kits?
Make an appointment from where now after they're returned back their home country - America, the UK, the Soviet Union? Shakehead** a quick once for upyeahvote, Twice for not?

Lol, Comrade. What a sick joke!!

Is there not a penalty for not filling out the required survey and taking the test after 5 days&gt; I thought there was. Seek these people out , give them a fine, and that will bolster social services for a day.

the islands ran out of tests, what do you expect to happen? lets make up another rule that the govt is simple too discombobulated to carry out like providing license plates when you license your car. How long have people been driving around with a receipt now??? dont blame the masses for your incompetence.

Let's face it. It was only a matter of time before the private clinics did not get paid by the government and they stopped providing the 5-day follow-up test service......